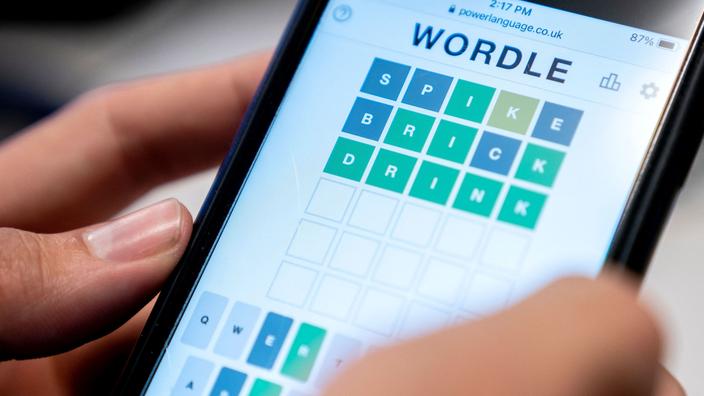 Thanks to word of mouth, this game which was not intended to be successful is approaching 3 million daily players. French versions have emerged.

Impossible to miss them on social networks. For the past two weeks, mysterious messages made up of black, yellow and green squares have been invading the news feeds.

Behind these intriguing publications hides the phenomenon of this beginning of the year: wordle. Starting from 80,000 players per day in November, this game rose to 300,000 at the beginning of January and is now approaching 3 million.

Nothing, however, destined this project to go viral. wordle was designed in 2021 by computer scientist Josh Wardle to amuse his wife, a fan of word games from the New York Times. Its mechanics are reminiscent of the game show Motus, which was broadcast for almost 30 years on France 2. The player of wordle has six tries to guess a five-letter word. The game indicates which letters are well placed and which are not.

wordle has nothing in common with today’s mobile games. It is even its antithesis. This is not an application: the game is hosted on a personal site of Josh Wardle. It does not display advertisements, does not include paid options, and does not try to hold the player’s attention with gauges to fill, diamonds to win and notifications. And there is only one word to guess per day, the same for all players. “I’ve done all the wrong things if you’re looking for growth. And it’s these choices that make the game so popular.“Amazes the developer at TechCrunch.

Josh Wardle shared his game with his British family and American friends. By word of mouth, the website reaches a journalist from the New York Times, who mentioned it in a newsletter in November. The machine is racing. But it’s the sharing function on social networks that will really propel the game. The mysterious squares represent the grid of wordle completed by the Internet user, but without the words. He can thus brag about his performance without revealing the solution to the riddle of the day. This intriguing format prompted other Internet users to learn about Wordle, and to test the game.

The phenomenon arrived in France but with a serious handicap: wordle is in English. For “provide a solution for those who want to play in French“, Louan Bengmah, 21, published Monday on his personal site Le Mot. “I have a Twitch channel where I talk about web development, and I thought it was a good little project to do live with my communitywhich helped him for two days. “It would not have been so fast without her, the atmosphere was benevolent.»

Louan Bengmah respected the spirit of wordle by not seeking to monetize Word “for ethical reasons. I respect the work of others. Josh Wardle had a great idea, his site is simple, and sharing the results on social media with colored emojis is awesome. Everything is really perfect.The developer has not installed a tracker to measure the number of visitors, but relies on its Twitter account @WordleFR to gauge the popularity of his project posted online on Monday. It had 2,100 subscribers on Friday, compared to 1,500 on Thursday.

Jonathan Magano, 30, put the game Sutom online on January 8. “Wordle is inspired by the game show Lingo, which for us has become Motus. The concept has evolved over time and the rules have become more complex. I decided to take them back“, he explains. The words to find are longer – from 6 to 9 letters – and the first letter is imposed. “But I removed the time limit“, explains the developer.

Opportunistic copies removed from the AppStore

sutom has been spotted by Twitch personalities and is growing in popularity day by day, with more than 30,000 hits on the site as of Wednesday. Again, the game is not monetized. “I coded this in a few hours for fun and I didn’t make anything up», Explains this web developer. “I know that people would be willing to pay to be able to do a second grid every day. But frustration is part of this game. Above all, I am a librarian. Sutom source code is online, people can grab it.»

Others had no scruples. Earlier this week, copies of Wordle flooded app stores, with ads or $30 options to play as many puzzles as you wanted each day. Apple eventually cracked down and removed these opportunistic clones from the AppStore. For his part, Josh Wardle has been approached by investors. But he wants to keep a cool head. “I don’t want Wordle to become a full time job“, he explains to TechCrunch. “It was just a game for my girlfriend and me.»