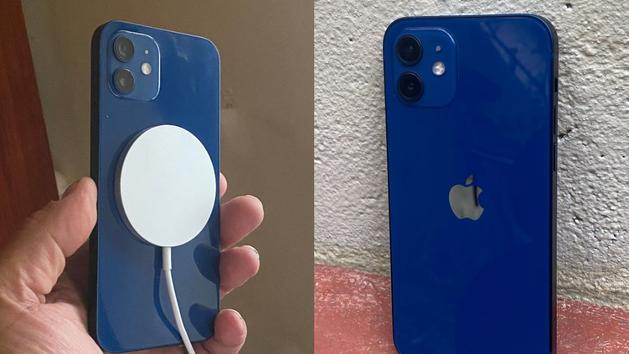 Here is the new iPhone, which immediately marks its difference with a renewed design. In fact, Apple was content to tap into the history of the iPhone. We thus find the angular profile inaugurated on the iPhone 4 and 5 with its rectilinear edges in aluminum. A necessity imposed to house the antennas that allow the device to communicate in 5G. But this new look also translates into a different grip. We like it or we don’t. But we will notice that the case seems less slippery to us than the domed one of the iPhone 11. In addition, this format gives more space to the screen which takes advantage of less thick contours. The iPhone 12 however retains the same notch at the top of the screen, accommodating the camera and various sensors… and which takes up a lot of space. Too bad, we would have liked a more discreet solution, as with some competitors.

Which screen, with a diagonal of 6.1 inches like the iPhone 11, adopts Oled technology while its predecessor was satisfied with an LCD display. Conclusion: incomparable display quality. Brighter and more contrasted than that of the iPhone 11, the screen of the iPhone 12 is also more precise: its resolution reaches 2340 x 1170 pixels against 1792 x 828 for the iPhone 11. And this evolution ensures a superb reproduction photos and videos, but also a more detailed display of characters, on the web or in digital books. To make matters worse, the screen is compatible with the HDR10 standard, which guarantees optimal contrast and more nuanced colors with videos. Watching movies and series on the iPhone 12 becomes a real pleasure.

If Apple hadn’t informed us that the screen isn’t glass, we would have seen nothing but fire. Dubbed the Ceramic Shield, this layer made from an alloy composed of nano-ceramic crystals is believed to be much stronger than glass, according to Apple offering four times the resistance to drops. Whether visually or to the touch, there is no difference to a conventional screen. Note that the case, to the IP68 standard, seems a little more waterproof than before since it protects the device from accidental swimming for 30 minutes in 6 meters deep.

After several days of testing in different situations, we are still amazed by the responsiveness of the phone. It must be said that Apple has still beefed up its processor. The newcomer, the A14 Bionic, has been engraved in 5 nanometers, which allows it to house more transistors (nearly 12 billion!), To perform its operations faster and to consume less energy. The component notably includes a coprocessor dedicated to artificial intelligence and a high-performance graphics chip.

For what use? Apple touts the ability to run particularly power-demanding games, like League of Legends, which usually require the compute, display, and connection capabilities of a high-end PC. We can imagine the interest for video game enthusiasts. Suddenly, we come to regret that Apple did not opt ​​for a more responsive screen: its refresh rate remains limited to 60 Hz while the competitors and the iPad Pro can reach 120 Hz, guaranteeing better speed and fluidity.

This steroid-doped processor mainly improves the shooting capabilities of the iPhone 12. Equipped like its predecessor with two 12-mega-pixel cameras at the rear (ultra-wide-angle and wide-angle), this model produces better results, as we could judge: its wide-angle lens captures more light with its aperture at f / 1.6 and digital processing is more effective. This results in beautiful images with controlled contrasts and more natural colors. Apple uses machine learning algorithms to optimize photos based on models, with the device automatically correcting white balance, contrast, and color saturation. Focusing is also faster and the calculation of shots in low light takes less time.

But it is especially for video recordings that the equipment of the iPhone 12 makes the difference. Not only are the images perfectly balanced, with very faithful colors, but the stabilization system plays its role perfectly, canceling the effects of shaking. Better: you can shoot 4K sequences at 24, 30 or 60 images per second and activate HDR mode to further improve the final rendering. Let’s face it: apart from Sony’s latest Xperia models, we’ve rarely seen a smartphone so comfortable producing cinema-quality video. The images are beautiful, smooth, with a superb blurry effect in the background and an autofocus rarely faulted. Apple also takes advantage of the performance of its processor to offer time-lapse night footage, again with amazing results.

Thinner, narrower and lighter than the iPhone 11 (162 g against 194 g), the newcomer is distinguished by original colors, green, red, blue, white, but it is still possible to obtain it in black. It still adopts the Lightning connector but also offers an original wireless charging system that takes the name of MagSafe previously used for the electrical outlet of MacBooks. On the iPhone 12, this is a magnetic surface, hidden behind the back of the device, which allows a new type of circular charger to be more precisely attached.

A welcome idea: not only do you no longer waste your time looking to see if the charger is correctly positioned, but the electrical transfer is more efficient, which speeds up the recharging time. In addition, the magnetic attachment avoids the risk of tearing the cable that would be plugged into the Lightning connector: at worst, the charger becomes detached from the phone without further consequences. This system works with compatible protective cases and new accessories, such as a leather card holder. The only concern is that Apple’s MagSafe charger is sold separately, as an accessory, at a price of 45 euros.

5G, an argument for later …

Another big news: compatibility with 5G networks. In fact, this specificity is of little interest to French customers since the corresponding offers will only be available in several months. But Apple praises the exceptional speed of this standard (4 Gbps, or even more in optimal conditions against a hundred Mbps in 4G) for watching streaming videos, downloading apps and music, as well as its low latency which will interest especially fans of online games.

Apple is also considering new opportunities, such as being able to watch a football game live from multiple angles, with the split screen showing the different cameras. According to the manufacturer, the system and basic apps have been optimized to adapt to 5G speeds. It should be noted in passing that the European version of the iPhone 12 differs from that available in the United States by the lack of compatibility with millimeter waves in 5G, which provide greater bandwidth.

Fast and smart, gifted in photos and videos, the iPhone 12 marks a fine evolution of the concept inaugurated thirteen years ago. The OLED screen, the resistance of its surface, the performance of the processor and the quality of the shooting module remain the most striking arguments, while compatibility with 5G can only be considered as a bet on the future. . We can however criticize some details about this new model: a notch still too visible on the screen, a memory limited to 64 GB for the basic version (without possibility of extension), which seems a little light today, especially for fans of photos and video, or the absence of an AC adapter in the box (which does not reduce the bill for all that). Sold for 909 euros with 64 GB, 959 euros in 128 GB and 1079 euros in 256 GB, the iPhone 12 can be a little cheaper thanks to the operations of taking back an old device offered by Apple.