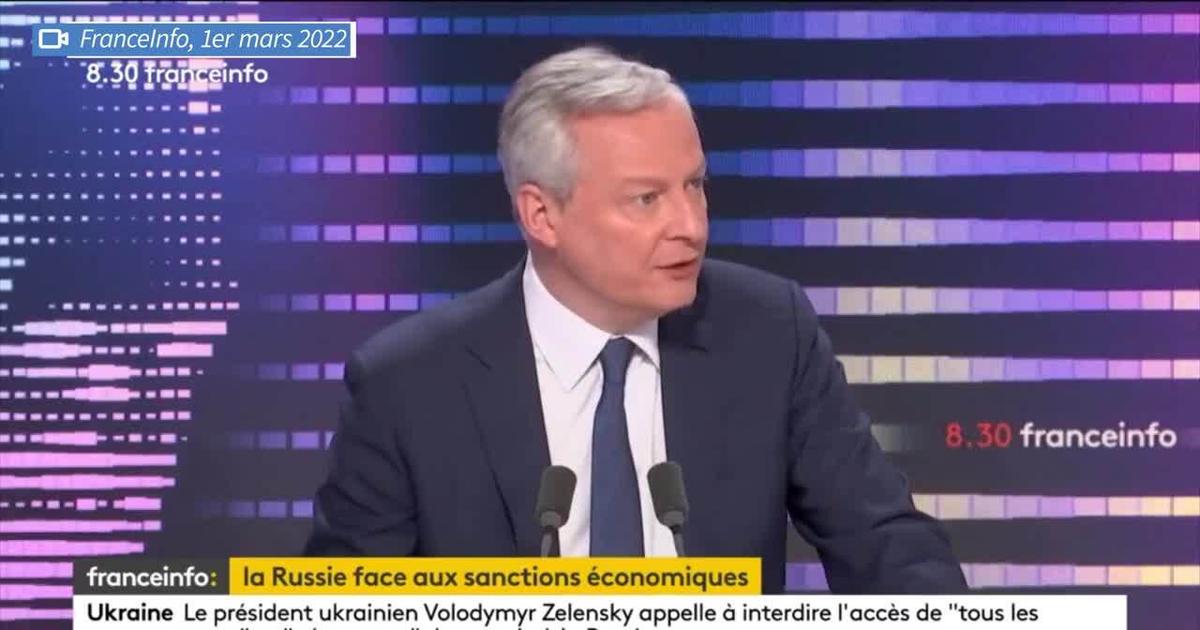 The Minister of Economy and Finance affirms that the effects of the sanctions on the Russian economy are “of formidable efficiency”. It plans to extend them with its European and American partners.

Guest of Franceinfo this Tuesday morning, Bruno Le Maire insisted on the scope of the economic and financial sanctions against Russia following the invasion of Ukraine. “We are going to cause the collapse of the Russian economy (…) We will go all the way. We want to target Vladimir Putin, but the Russian people will suffer too. We can not do otherwise”, Economy Minister Bruno Le Maire said on Tuesday.

According to him, these sanctions are “tremendously efficient. (…) We can already see the effects (Sanctions)the ruble has lost 30%, Russian reserves are melting like snow in the sun, inflation is rising, Russians are queuing in front of the banks».

Future measures against the oligarchs present in France

As such, France intends to strike the Russian oligarchs present on its territory, whose number Bruno Le Maire still does not know. “I set up a task force to identify all the Russian oligarchs, their property, their assets which are in France, in the name of the oligarchs, their spouses, their children, their property companies. So that they cannot hide behind financial arrangements. We are working legally with the chancellery so that the freeze becomes a seizure, we are going to touch the heart of Russian power (…) No oligarch will slip through the meshes of our nets, that is our objective”, promises Bruno Le Maire.

The minister also mentioned a possible tightening of sanctions against Russia “if necessary”jointly with the US government, while recognizing that these sanctions will have consequences on the French economy and in particular energy prices. “The French are aware that freedom has a price”insisted Bruno Le Maire.

In response, Deputy Chairman of Russia’s Security Council and former President Dmitry Medvedev responded on Twitter in French: “A French minister said today that they had declared economic war on us. Watch your speech, gentlemen! And remember that economic wars in human history have often turned into real wars.”

Asked about the continuation of the activities of the Engie and TotalEnergies groups in Russia, Bruno Le Maire now considers that there is “a problem of principle to work with any personality close to the Russian power. We will discuss it with the CEO of TotalEnergies Patrick Pouyanné, the general manager of Engie Catherine MacGregor. We will make decisions together in the days to come.

Read also“We are in complete uncertainty”: in Russia, the concern of French companies

Under pressure, TotalEnergies announced on Tuesday morning that“he will no longer provide capital for new projects in Russia”in the midst of war with Ukraine, without withdrawing for the moment from the projects in which it is currently invested.