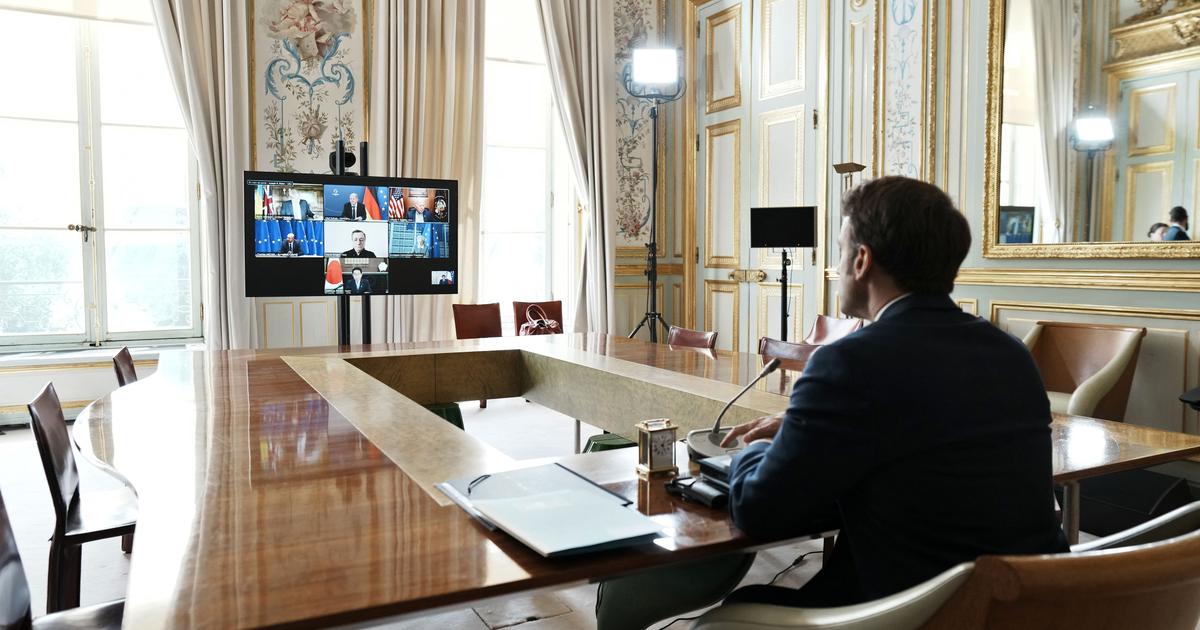 The G7 held its third meeting of the year this Sunday in the presence of Volodymyr Zelensky. The White House announced in parallel new sanctions against the Russian media and access to American consulting and accounting services.

“The entire G7 pledged today to ban or phase out imports of Russian oil“, announced Sunday the White House in a press release.

This decision “will deal a blow to the main artery irrigating the economy of (Vladimir) Putin and deprive him of the income he needs to finance his waragainst Ukraine, says the US executive. Its press release, however, does not specify exactly what commitments each of the G7 members has made, namely Germany (which holds the presidency this year), Canada, the United States, France, Italy, Japan, and the UK.

LIVE – War in Ukraine: “We will fight as long as we are alive”, say the soldiers entrenched in Azovstal

The G7 held its third meeting of the year by videoconference on Sunday, with the participation of Ukrainian President Volodymyr Zelensky. The choice of date is highly symbolic: Europeans commemorate the end of the Second World War in Europe on May 8. This Sunday meeting is also held on the eve of the May 9 military parade in Russia, which marks the victory of the Soviet Union over Nazi Germany.

The West has so far shown very close coordination in their announcements of sanctions against Russia, but they are not moving at the same pace when it comes to Russian oil and gas. The United States, which was not a big consumer, has already banned the import of Russian hydrocarbons. The member states of the European Union, under pressure to join the movement, but much more dependent on Russia, continued Sunday to conduct intense negotiations to set up an embargo on Russian oil.

Washington also announced in a White House statement on Sunday a new salvo of sanctions against Russia, around two major axes: the media, and the access of Russian companies and large fortunes to consulting and accounting services including the Americans and the British are the world’s leading specialists.

The United States will sanction the television channels Pervy Kanal, Rossiïa-1, and NTV. Any American company will be prohibited from financing them by advertising or selling them equipment. “No American company should participate in the financing of Russian propaganda“Said a senior White House official, who requested anonymity, stressing that these media were directly or indirectly controlled by the Kremlin.

Another axis of attack from Washington: prohibit the provision of services “auditing, management, consulting, marketing, all services used to operate multinational companies, but also potentially to circumvent sanctions or hide ill-gotten wealth“, said the same source. She underlined that while the Europeans had the closest industrial ties with Russia, the United States and the United Kingdom, on the other hand, dominated the world of services, in particular through “Big Four“, the four global giants of auditing and consulting Deloitte, EY, KPMG and PwC.

Read alsoCommemoration of 1945: Putin, one eye on the parade, the other on Ukraine

Washington has also announced new bans on the export of American products to Russia, on a whole series of capital goods ranging from bulldozers to ventilation systems and boilers. The United States finally let it be known on Sunday that it would impose visa restrictions on 2,600 Russian and Belarusian personalities, as well as take sanctions against officials of the banks Sberbank and Gazprombank.