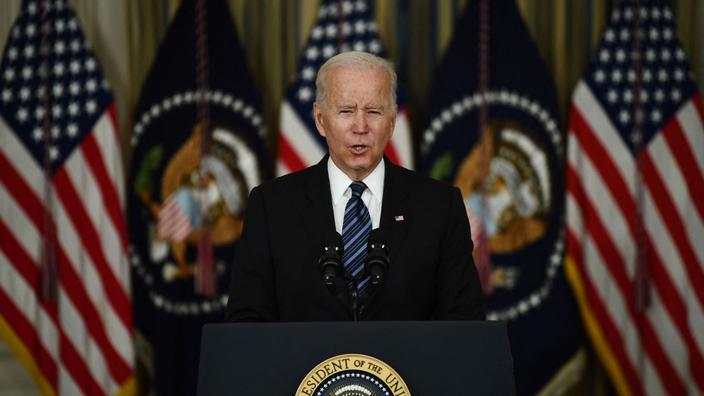 The adoption of this plan of 1,200 billion dollars is a half-success for the American president who did not manage to obtain a vote Friday on the social and ecological aspect.

The American Congress definitively adopted Friday evening the vast plan of investments in the infrastructures wanted by Joe Biden, a victory obtained in pain by the Democratic president who could not convince the parliamentarians to vote also the social and ecological aspect of his ambitious reform projects. It took 218 votes for Democrats to pass this $ 1.2 trillion plan to modernize roads, bridges, high-speed internet and considered one of the most ambitious in modern American history. They obtained 228 against 206, thanks to the contribution of a few Republican votes, and the approval of the law was greeted by a round of applause. The president will only have to sign it for it to come into force.

The American House of Representatives had met in the morning with a clear objective: to finally validate the two plans of Joe Biden, 3 trillion of expenses thanks to which he promises to transform America. Including a very large social component, providing in particular nursery school for all, a profound improvement in health coverage and significant investments to reduce greenhouse gas emissions – a profound redefinition of the welfare state in the United States .

But this project is the subject of very difficult negotiations within the Democratic Party, in particular between the left wing and the moderate camp, and its total cost has already been halved, planed to 1750 billion dollars. All day long, the Democratic Speaker of the House of Representatives tried to get her troops in order, and to generate enthusiasm for the president’s plans. “The program that we are promoting is innovative, historic, and that is what makes it a challenge”, she had declared in a letter to the Democrats, as if to explain these internal quarrels between elected officials of the party. But last-minute negotiations – moderate elected officials demanding precise costing of these costly expenditures – ended up paralyzing the process and forced the leaders in Congress to postpone, once again, the holding of a vote. It is now expected “Before Thanksgiving Day” according to Nancy Pelosi, that is before November 25.

Manchin and his virtual right of veto

By adopting the only infrastructure program on Friday night, Democrats are saving the furniture despite the deep divisions running through their party. The president, faced with tumbling popularity ratings and weakened by a resounding defeat in a local election in Virginia this week, badly needed the half-success. But the progressive wing of the Democratic Party had repeatedly warned that it would not support this text without a guarantee of the passage of the social and climate component of Joe Biden. Some elected Democrats thus joined the Republicans in voting “no” to the adoption of the plan.

Biden’s trips to the Capitol, breakfasts with elected officials … The White House does its utmost to garner support. Because the US executive repeats it over and over again: the president’s spending programs are very popular with Americans, according to polls. However, the Democrats will call into play in a year their narrow majority in Congress during parliamentary elections of mid-term, always perilous for the presidents in place.

Read alsoIn the United States, the election of the governor of Virginia serves as a test for Joe Biden

But Joe Biden, who praised his negotiating skills during the presidential campaign because of his long career as a senator, stumbles on these internal disputes. And the president is not at the end of his sentences. After having finally obtained the green light from elected officials in the Chamber, its major social component will still have to be approved in the Senate, where it risks being significantly revised. Its fate is more particularly in the hands of an elected official from West Virginia, Senator Joe Manchin, who says he fears that the plan will further widen public debt and fuel inflation. In view of the very thin Democratic majority in the Senate, he virtually has a right of veto on the project.