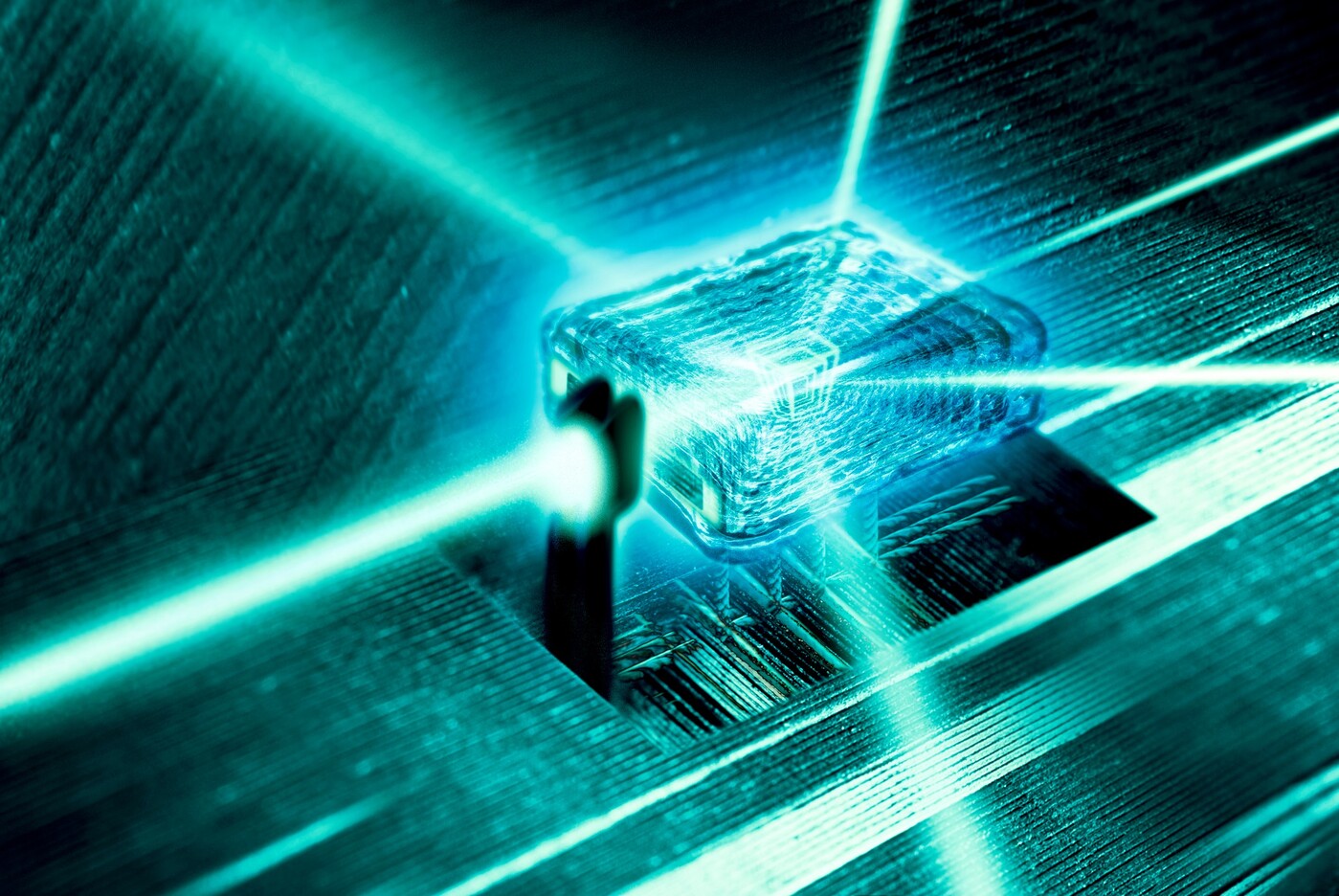 Not a month without a large group announcing a “Revolution” concerning the quantum computer. Whether it’s a mysterious record qubits, unparalleled computing power or high precision sensors, quantum is everywhere. At the end of January, Emmanuel Macron announced a “strategic plan” in the field, with 1.8 billion euros spread over five years. But what are we talking about?

► What is the difference with a conventional computer?

A quantum computer works, as its name suggests, thanks to the properties of quantum physics, which reigns over the infinitely small. “This idea of ​​using quantum mechanics, known for over a century, emerged in the 1980s”, says Denis Vion, specialist in quantum electronics at the Commissariat à l’énergie atomique de Saclay. The quantum computer is based on the phenomenon of superposition, which means that a quantum particle can be in several states at the same time.

To understand, let’s go back to a classic computer. This operates according to a binary system where bits, basic information units, can only take the value 0 or the value 1. Conventional machines therefore perform operations very quickly, but one after the other. It is as if to find the factors of 21 you were going through 1 × 1, 1 × 2, 1 × 3 etc. up to 3 × 7. Quantum physics allows for parallelism thanks to superposition: a quantum bit, called qubit, can be 0, 1, but also both of them. Imagine that you only have blue and yellow markers, and you are given a green marker. Drawing grass just got easier.

In the case of two or more qubits, we can even obtain very particular superimposed states, called “entangled states”. The qubits are then linked to each other in a way that does not exist in the classical world and make it possible to speed up the calculation. “ Without entanglement, we fall back on a classic supercomputer », Specifies Christophe Vuillot, member of the Mocqua team (Emerging computational models), at Inria, Institute for research in digital technologies.

► What is a quantum machine used for?

“To quickly perform massively parallel operations and therefore tackle complex mathematics with reduced processing time, indicates Sébastien Tanzilli, research director at CNRS and specialist in quantum technologies. It is as if you were going from a mountain with a 45 ° ascent to a small gently sloping hill. “ For the moment, the first two uses of quantum computing can be summed up in research in large lists of unsorted data, and factorization, in particular for cryptography..

For unsorted lists, imagine looking for who owns a phone number with a paper directory. You have to go through the names one by one to see if the number matches, a tedious task. Using a quantum computer would be like using the reverse directory: you enter the number and poof, the corresponding name appears. An improvement that has something of interest to Google!

For the factorization, if we take the 21 again, a quantum machine will scroll through all the possibilities at the same time, like a slot machine, to lead directly to 3 × 7. Note that with such a simple operation, the quantum advantage does not exist: a classical computer is already going well enough fast. All in all, for you and me, a future quantum computer will be for naught. “ The quantum computer will only be used for very complex problems », Recognizes Sébastien Tanzilli. And be careful, “There are plenty of things that quantum does not know how to do or does not do well and that it is not intended to calculate”, recalls Cyril Allouche, head of quantum research and innovation at Atos. The French group has also set up a “ Q-Score “to measure whether there is really a” quantum performance ”.

Once fully operational, these computers will also be able to solve optimization questions, such as “ the traveling salesman problem ”. ” If you leave with a list of cities to visit, it becomes complicated to calculate the shortest route from ten cities. Beyond 60 cities, even the most powerful supercomputer in the world will block, unlike quantum, describes Elie Girard, CEO of Atos. The simulation needs justify quantum computing. »Ideal for logistics management. In chemistry, the synthesis of very large molecules, for drugs for example, would also be greatly facilitated. On the weather side, we could finally take into account the multiple and fine variations to improve forecasts. And in artificial intelligence, some are already imagining refined robots, closer to human intelligence.

► What are the limits of quantum machines?

Let us recall that there is for the moment no quantum computer worthy of the name, despite some thunderous announcements. “Quantum computers remain small and do not correct their errors”, abounds Sébastien Tanzilli.

Then, you have to understand that the quantum world is very fragile, and interacting with it causes a disturbance. We speak of “decoherence”: as soon as we observe the machine, when it interacts with the outside, the quantum superimpositions disappear. “This decoherence is not serious when we measure, since we seek the result, intervenes Denis Vion. On the other hand, if the qubits interact in an uncontrolled manner with their surroundings during the calculation, we lose the information sought. “ And by virtue of entanglement, “A single qubit disturbed, and it is potentially the whole system which is affected”, adds Christophe Vuillot. Going back to the idea of ​​the markers, it’s like having a box with all the shades of green, from almond to fir, but as soon as you pull one out, they all go back to either blue or yellow. The quantum state, green, no longer exists.

However, the more complex a problem, the more entangled qubits are needed to solve it effectively, and the greater the risk of decoherence. In other words, the more you ask the quantum computer, the faster it gets tired. “Quantum algorithms are therefore designed to minimize the reading of data, indicates Cyril Allouche. It should be understood that quantum information is by nature ephemeral and cannot be copied. “

Is the quantum computer therefore for single use? ” No, not more than your calculator, answers Denis Vion. You can reuse it as many times as you want, but each calculation must be done in less than the CPU decoherence time if you want a correct result. “

► How do you make a quantum machine?

For now, quantum computer attempts look more like gigantic refrigerators than our PCs. “There is also no point in a quantum desktop computer, says Cyril Allouche. These machines will be reserved for very specific uses in industry and research. “

Several techniques exist. “No solution has shown a decisive advantage over another, believes Christophe Vuillot. Superconducting circuits can be used, which look like specific electronic circuits and very cooled. You can trap ions in an electromagnetic field or use photons, electrons, etc. “The challenge is to achieve controllable quantum systems that are stable over time”, recalls Cyril Allouche. “The next step will be an accelerator, a hybrid machine with qubits attached to a supercomputer”, describes Elie Girard.

► Why do we talk a lot about quantum cryptography?

“The quantum computer poses a threat to the way all our data is encrypted, from banking to healthcare, begins Sébastien Tanzilli. Current encryption is based on the inability of a classical machine to factor a very large number into its prime factors in an acceptable time. The qubits of a quantum machine would, on the contrary, make it possible to “break” this encryption in a short time. “

Consider one of those games where you have to flip a combination of switches in the correct order to light a lamp. Now imagine a much more complex version, with thousands of switches whose combinations turn on thousands of different lamps. Checking everything would take such a long time that the players would give up. With a quantum computer, this processing time would be drastically reduced and the game would become easy for those with access to this technology.

Faced with this risk of decryption, researchers are working on so-called quantum cryptography. Using the inviolability of the laws of quantum physics, the idea is that any spy who wanted to intercept the message would disrupt him. The maneuver would therefore be identified.

A quantum computer, for the moment non-existent, would be a machine similar to current computers but operating according to the principles of quantum physics.

The principle of superposition wants a particle in a quantum state to have several possible values. This is the idea represented in the thought experiment known as “Schrödinger’s cat”.

The principle of entanglement wants two or more particles in a quantum state to be codependent regardless of the distance between them.

The qubit is a basic unit for supporting information in a quantum computer, on the model of bits in classical computers.