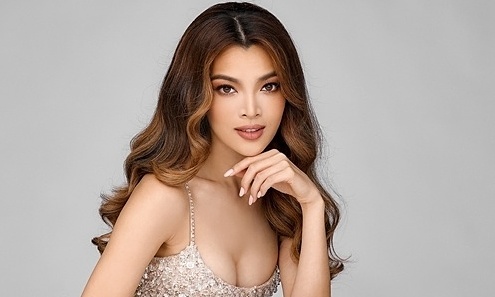 Tran Dai was in the Top 13 contestants after the preliminary round on June 19. She appeared on stage to the vibrant music with four backing dancers. The content of the dance shows the image of a phoenix rising from the fire and ashes. The performance was staged from the story that Tran Dai was discriminated against by a group of friends in the past.

At the beginning, Tran Dai in a school uniform before transgender, acted out the scene of being bullied by a group of friends. In the latter part, she changed her appearance with a fringed jumpsuit that showed off her slim legs. At the end, she pulled the LGBT community’s green flag to cover the stage.

The performance helped Tran Dai win. The moment the MC read the name “Vietnam”, many applause from the audience erupted to congratulate her. Tran Dai said: “I am happy with my first victory in the competition. To have this appearance, I had to practice choreography very hard. The difficulty also comes from acting, having to express many emotional states. through eyes and facial expressions.

She spent weeks rehearsing with the previous choreographer. At one time, Tran Dai suffered an injury but it was not too serious, then quickly recovered to return to practice.

The beauty added about the inspiration for the exam: “It’s a true story of my school days. A group of friends burned leaves and pushed me into the fire. That bad memory used to haunt me for a long time.” .

On the same day, Tran Dai contest “National costume”. She wears the design Real Kim inspired by rice plants, storks, cranes, and the sun by designer Nguyen Minh Triet. The costume consists of ao dai combined with four bodies, in order to convey the beauty of Vietnamese culture. Her contest received great cheers from hundreds of spectators present at a shopping center, including many Vietnamese fans. The results of this contest will be announced in the final, on June 25.

She left for Thailand to compete at Miss International Queen 2022 from June 12, carrying 200 kg of luggage. Over the past week, Tran Dai has been praised for performing well in challenges such as taking videos to introduce herself, TVC and sponsors.

Beauty full name Phung Truong Tran Dai, born in 1992, is the youngest child in a family of six siblings in Ho Chi Minh City. Born in the form of a man, at the age of eight, Tran Dai realized her own sexual orientation. At the age of 15, she went to Thailand for surgery.

Tran Dai is 1.71 m tall, measuring 90-62-91 cm, and is considered to have the same face and contours as Miss Universe 2017 Demi-Leigh Nel-Peters. She graduated with a degree in Skin Care from the Asian American Beauty College in the US. In October 2020, Tran Dai put aside her work in California and returned home to take the exam Perfect Ambassador and crowned.

Miss International Queen has been held in Thailand since 2004 – is one of the world’s largest beauty pageants for transgender people. Vietnamese contestants who have attracted attention in the contest include Do Nhat Ha (Top 6 finalists), Bui Dinh Hoai Sa (Top 12), and Huong Giang crowned in 2018.

Miss International Queen 2022 takes place from June 14 to 25. The reigning Miss Valentina Fluchaire, Mexico, will hand the crown to her successor.