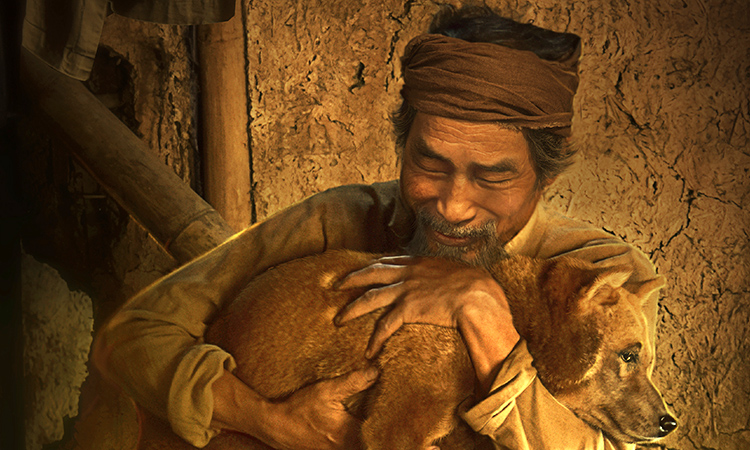 The first trailer of the movie “Cau Vang” has a different episode from the original literature when Lao Hac’s dog got up and escaped from the crowd.

The film introduces in detail the creativity of director Tran Vu Thuy. After eating, the dog got up from the noose, ran across the village roads, jumped into the water to escape. Director Vu Thuy said he chose the dog to play Cau Vang because the animal had an acting quality, adapted to the crew.

The video introduces the film also depicts the close relationship between Lao Hac (artist Viet Lien) and Cau Vang. Not only a pet, the dog is the spiritual support of the old man, “the only souvenir his son left behind”. In one scene, Mr. Vang helps him chase away the buffaloes in the garden. Poverty pushed him to the end, forcing him to sell dogs. At the last meal, he said to the people who came to catch the dogs: “Give it a full meal and then catch it.”

Villains appear for the first time. Artist Huu Chau plays Ba Kien – the most core filter in the village. The last line of the trailer reveals the plot that Ba Kien wants to take over Lao Hac’s land. Will – as Ly Cuong, Ba Kien’s son – has a sinister face.

The film crew was controversial when choosing the Shiba dog – a typical Japanese breed – to play the Golden Boy. The team representative said they could not find a suitable dog. Initially, the team intended to choose a pure Vietnamese breed. They sent two pure Vietnamese dogs into the centers to prepare for the role. However, after the training process, the two animals do not meet many difficult techniques of the shoulder due to being accustomed to a natural lifestyle.

In contrast, the Shiba dog satisfies the director’s requirements such as: male dog, intelligent, agile response, friendliness … and at the same time passed many tests. When on the screen, the animal is shaped to look like a Vietnamese dog, bringing a sense of closeness. Enk arranged two more pure Vietnamese dogs to support the role of Vang, in case the dog played the main illness.

The old crane was composed by Nam Cao in 1943, in the Philology textbook. The work is one of the typical short stories of the real literary line, reflecting the current state of Vietnamese society in the period before the August Revolution. In 1982, The old crane, and two other works by Nam Cao are Live worn out and Chi Pheo, made into a movie Vu Dai village that day (Director: People’s Artist Pham Van Khoa). The role of Lao Hac was assigned to the actor – writer Kim Lan.