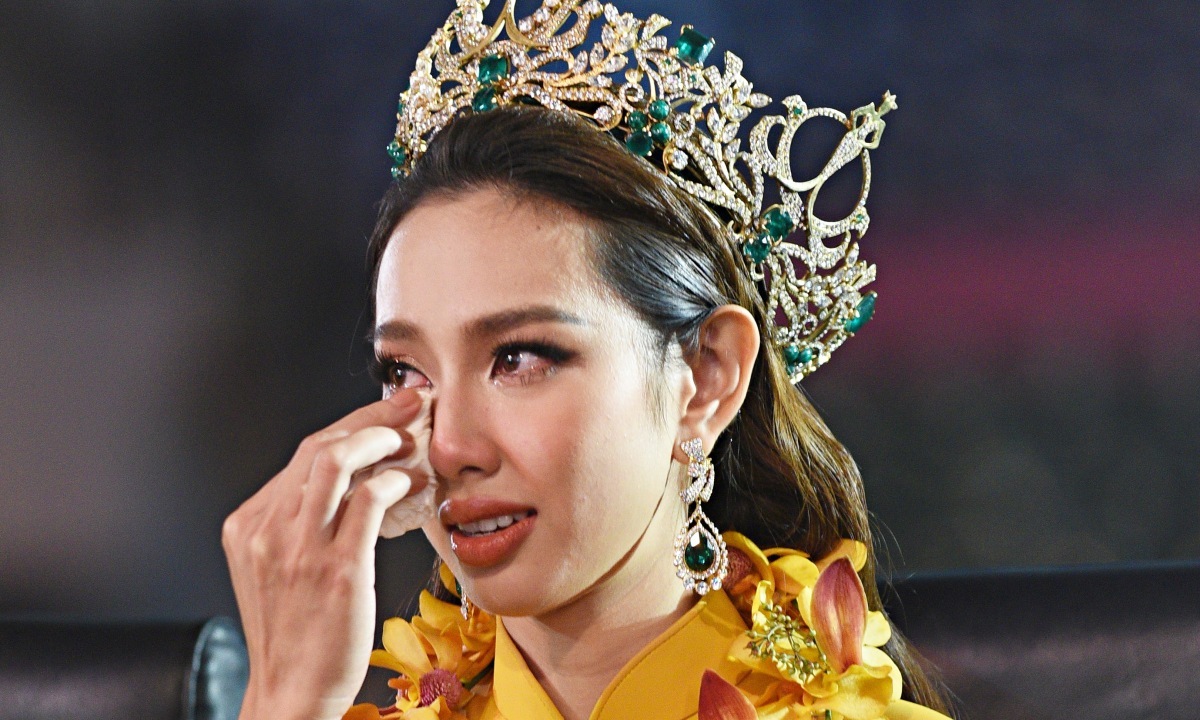 Ho Chi Minh CityMiss Thuy Tien shed tears when she heard from her family, met them again after going abroad for a beauty contest, on the evening of January 11.

During the fan exchange when returning from Miss Grand International, Thuy Tien was given a spiritual gift by the organizers – a video recreating her journey from childhood to adulthood, winning the title of Miss. Grandma, father, mother, and aunt said that when she was a child, Thuy Tien hated eating vegetables, liked salted egg sponge cake, and had a similar personality to a son.

Thuy Tien’s parents divorced when the beauty queen was four years old. The beauty lives with her grandmother, sometimes her parents come to visit. Miss mother said there was a time when Thuy Tien asked to follow but she did not want her children to suffer. Living far from the arms of her birth, Thuy Tien used to cry a lot, but it was also a reason for her to be stronger and more mature soon.

The whole audience was reminded of the moment when Thuy Tien was crowned more than a month ago. Miss’s parents said they couldn’t believe it when their daughter entered the top 5, top 2 and was named the highest position.

Thuy Tien sat in the front row, bursting into tears when she heard these words. Miss has been away from home for nearly two months since she went to Thailand to take the exam. On the stage to celebrate the victory, she was reunited with her family. The space and music of the meeting moment touched many people, Thuy Tien hugged everyone and gave flowers. Below, many spectators shouted “Fairy, don’t cry!”.

Thuy Tien said: “I didn’t think people would prepare such an emotional video because so far my family members rarely come in contact to give interviews. I was very touched when I heard these words. talk, review memories. I’m a person who doesn’t show my emotions to the outside. My personality is like a son’s mother. However, I love my family very much. I hope everyone will love me the same way I love my family. I am.”

At exactly 6pm, the beauty appeared in a long dress by designer Nguyen Minh Tuan, walking in the cheers of many spectators at Phu Tho Gymnasium. Miss said: “Right now I don’t know how to express my feelings, I’m nervous, happy, and worried. Yesterday I asked the crew if anyone would come tomorrow because I was crowned more than yesterday. It’s been a month. At first, I thought I couldn’t cry, but seeing everyone’s love, I couldn’t hold back my tears.”

>>> Thuy Tien sings and interacts with the audience

Miss thanked everyone, especially the fans, when they were around to encourage and protect. She promised to try her best to have a successful term, not to disappoint those who believe and love.

The night to celebrate Thuy Tien’s victory took place at Phu Tho Gymnasium with about 3,000 spectators, many beauty queens and runner-ups. Interspersed with exchanges are musical performances.

From 3:30 p.m., Thuy Tien rides a double-decker bus and parades through some major roads toward the exchange site. Hundreds of fans accompanied her, creating a bustling atmosphere on the street.

Thuy Tien took a flight from Bangkok to Da Nang on January 6, isolated for three days according to new regulations of the authorities. She then had a meeting with Deputy Minister of Culture, Sports and Tourism Ta Quang Dong, representative of the Department of Performing Arts to report on achievements and work after being crowned.

The beauty was crowned Miss World Peace on December 4 in Bangkok, helping Vietnam have its first victory at this beauty playground. She stayed in Thailand to participate in communication and charity activities with the organizers for many weeks.