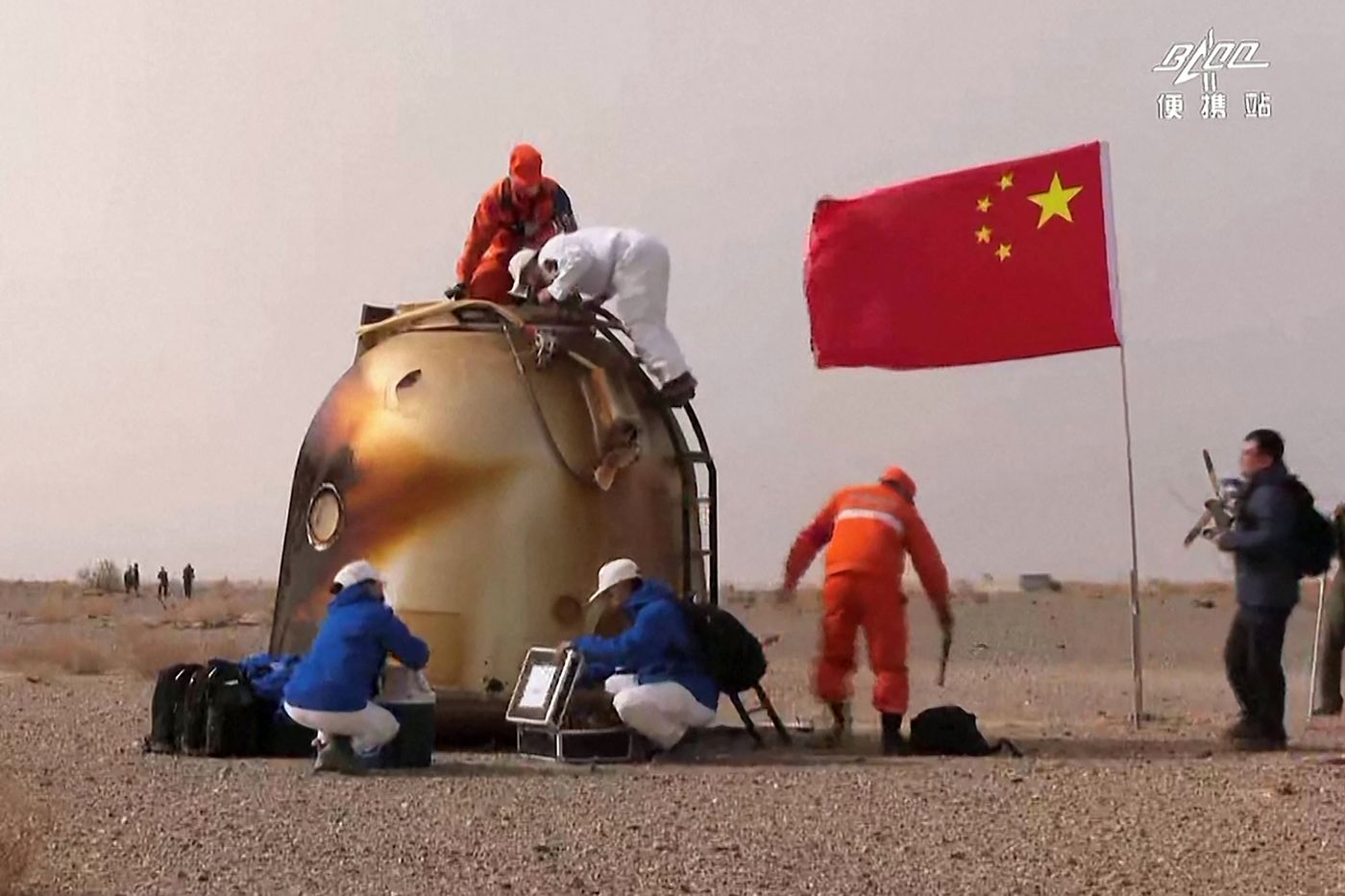 The three astronauts of the Chinese Shenzhou-13 mission returned to Earth on Saturday April 16 after six months spent in the Chinese space station. It is China’s longest stay in space. This is a new step taken by Beijing in its ambitious space program.

Two male and one female crew

After triggering its red and white parachute, the capsule where the crew had taken place landed shortly before 10 a.m. in the desert of Inner Mongolia. Chinese television footage showed the landing in a cloud of dust. Ground crews, who had stood aside, then rushed by helicopter to reach the capsule.

The crew was made up of three army pilots: commander Zhai Zhigang (55), his colleague Wang Yaping (42), who became the first Chinese woman to carry out a spacewalk in November, and the youngest Ye Guangfu (41 years old), whose first spaceflight it was.

With 183 days in space, the crew smashes the previous national record for a stay in space, which was 92 days and was set in 2021 during the previous manned mission, Shenzhou-12.

Towards the permanent occupation of the station

“The goal with Shenzhou-13 was not in itself to set a record but to develop the skills necessary for a permanent occupation of the station”explains Jonathan McDowell, of the Harvard-Smithsonian Center for Astrophysics in the United States.

In six months, the crew carried out two spacewalks, continued the construction of the station, carried out experiments and refined their mastery of long-duration stays. “For example, they improved their maintenance skills, through spacewalks and manipulations of the robotic arm” of the station, details Chen Lan, analyst of the site GoTaikonauts.com, specialized in the Chinese space program.

Shenzhou-13 was not “not a significant breakthrough” but “on the other hand, the completion of the station during the year will be a very important event”he pointed out.

Named in Chinese Tiangong (“Heavenly Palace”), the Chinese station should be completed by the end of 2022. Its expected lifespan is about fifteen years. The next stages of construction are the dispatch of a cargo ship in May, followed by another manned mission, Shenzhou-14, which should be launched in June.

The last two space station modules are to be sent from July. They will head into space from the Wenchang Launch Center, located on the tropical island of Hainan. From Shenzhou-14, the Chinese station should be permanently occupied.

China in the space race

China has been investing for several decades in an ambitious space program intended to catch up with the United States, Europe and Russia. She sent her first astronaut into space in 2003. Since then, she has landed a machine on the far side of the Moon in early 2019, a world first. In 2020, it brought back samples from the Moon and deployed its satellite navigation system, a competitor to the American GPS.

In 2021, it landed a small robot on Mars and plans to send men to the Moon by 2030. China has been barred from the International Space Station since 2011, when the United States banned NASA to engage with the Asian rival.