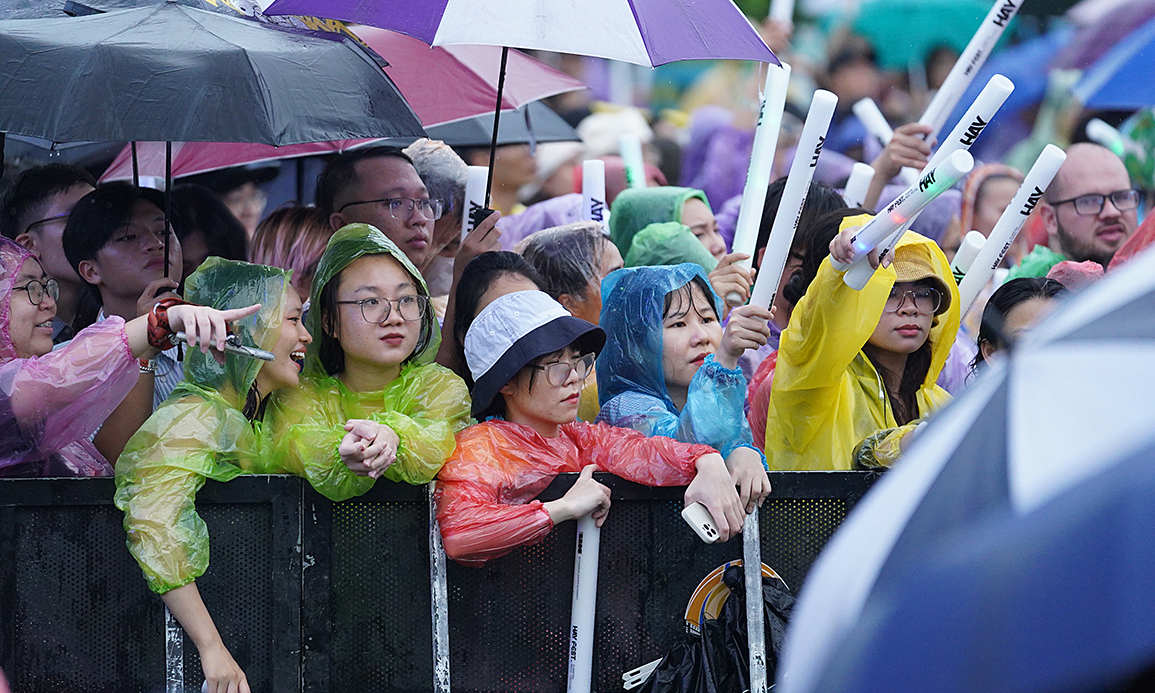 HanoiThe audience stood in the rain for five hours, cheering on the hit group – The Moffatts, 911, A1, Blue – at the show on the evening of August 6.

Before the international artists performed, it rained, causing the show schedule to be delayed by half an hour. Despite the bad weather, the audience still flocked to the central stage area at Yen So park to support the idol.

At 5pm, 911 appeared, immediately stirring up the music atmosphere with a series of classic love songs A night to remember, Party people, Don’t make me wait, The day we find love, Love sensation… At the age of U50, the three members of the group, although “promoting”, still retain their sweet voice. They interweave some ballads between vibrant repertoire, perform many difficult dance moves such as acrobatics, head resting on the ground and rotating. MC Dinh Tien Dung humorously expressed his emotions: “Three uncles and aunts are plump, dressed simply, swaying back and forth, love it to death. Tears in my eyes when I see idols dancing. This age is already discs. and your vestibule is still very good.”

The most emotional moment in the group’s performance was when the artist and the audience sang together I do. At the same time, a male audience member proposed to his lover and she said “I do” (I agree). The moment was recorded by the organizer’s drone.

Amidst the vibrant music festival atmosphere, The Moffatts is like a quiet note. The three Moffatt brothers did not sing with the band, accompanied themselves on guitar and performed a series of songs Heaven, Girl of my dreams, Bang bang boom, If life is so short, Miss you like crazy, True color… The group created a surprise when combining with Sweet in two songs Miss you like crazy, Misery. Thang – the main vocalist of Sweet – said he inherited his love for The Moffatts from his brother. After the performance, he said he couldn’t believe he could duet with his idol.

The A1 had some audio problems when it was raining heavily, causing the microphone to sometimes lose sound. However, each time, the audience sang along with them. The moment when thousands of people stood in the rain, humming Like a rose, Everytime, One more try moved the group, constantly saying thank you. With familiar songs Everytime, the group sang one more time with Da LAB of Vietnam.

Blue’s four vocalists are the closing artists of international groups. The band was dubbed the “legend of England”, having the largest number of fans at the event. The rain was getting bigger and bigger like a catalyst, making fans excited, constantly cheering and dancing. As a group that is younger than 911, A1, Blue sings and dances vibrantly, enticing the audience to “burn” to their fullest through a series of electronic songs such as: Dance with Me, Haven’t found you yet, You make me wanna… The group also brought the audience back to the memories of the 2000s through a series of hits All Rise, Sorry seems to be the hardest word, One love.

International artists do not talk much but connect well with the audience through music. Although the artist did not introduce, just a few notes sounded, viewers immediately guessed the name of the song. With familiar songs like I do, Like a rose, Everytime, All Rises, The artist constantly invites fans to sing along. Interspersed with performances, the words “I love you” are said by the artist and the fan.

Audiences of four international boybands are mainly from the 8x and 9x generations, happy to be immersed in the rain of childhood memories. Standing right near the stage from the beginning of the program, Thai Minh Phuong (38 years old, Hanoi) and his group of four friends sang from beginning to end. For fear of losing their beautiful position, the group did not dare to leave to buy food, missing the opportunity to be near their beloved singer. By the time Blue performed the last songs, some members of the group were tired, had to rest for a few tens of seconds, but quickly got up, shouting and dancing along with the artists.

“Since I heard that you guys are going to Vietnam, I immediately bought combo tickets for all my friends. I can’t believe that you guys will come to Vietnam and perform right in front of us. Although the appearance has changed a lot. , your voice is still as sweet as before,” said Minh Phuong.

Khanh Ly, an audience member from Ho Chi Minh City, humorously said: “I am a U40 aunt, leaving my husband and two children at home, going to Hanoi to ‘dance’ with my sister. Being a fan of Blue, but I really feel it. 911, The Moffatts and A1 were also great today.”

Book author Trang Neko (33 years old) said she felt like she was back in her teenage years, holding CDs and posters daydreaming about her idol. “The moment everyone sings familiar tunes, I feel like time stands still,” Trang Neko said.

The program also scored points in the sound and light system “with ears, eyes”. Although it was raining, the organizers had to cover the loudspeakers, and the sound from the stage still reached all areas of the audience. The large LED screen creates beautiful effects, supporting the artists’ performances. Many screens creating smoke, shooting ribbons, spraying artificial fire contribute to stirring up the atmosphere of the festival.

Editor Anh Tuan played the role of MC, making viewers feel like they were returning to the atmosphere of watching MTV programs in the 1990s and 2000s. His host – Phi Linh – scored points in the exchanges with international artists. She suggested The Moffatts about delicious food in Vietnam, sang a piece of Vietnamese lyrics to the song Everytime of group A1…

Artists perform at the HAY Glamping Music Festival, organized for the first time by The BROS Entertainment. For the first time, four international boybands came to Vietnam at the same time, attracting the attention of many audiences.