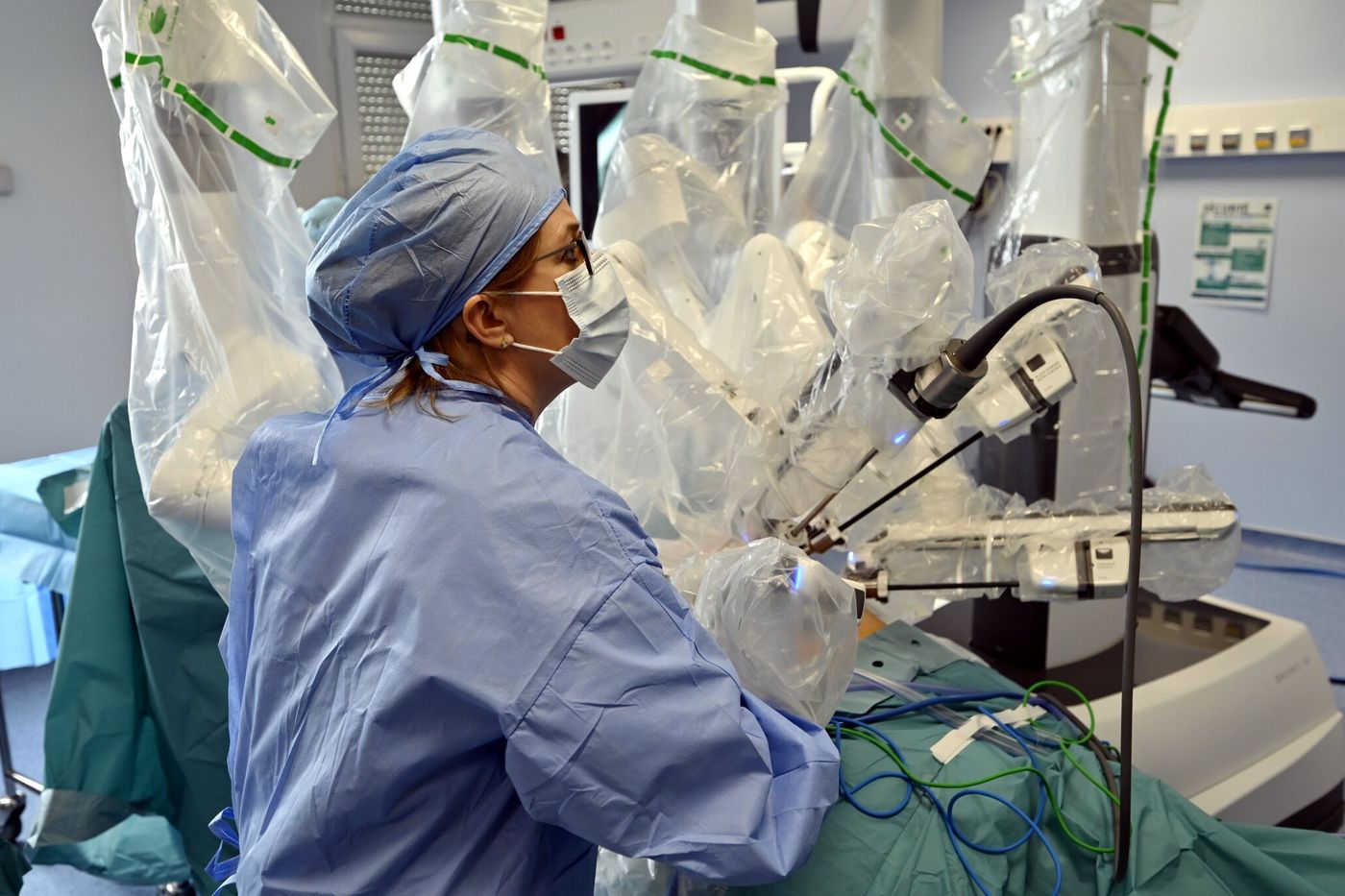 For nearly an hour, Lily-Marie will remain snuggled up against her mother, as if to draw a little comfort and courage. Just over six months ago, the 14-year-old discovered she had endometriosis. Since her first period, her menstrual cycle has been systematically accompanied by headaches, vomiting, “and sometimes I even find it difficult toto place »she confides, looking troubled.

This Thursday, her mother Catherine accompanied her to Espace Écully, in the inner suburbs of Lyon, for an information meeting on Endomaître, a so-called care pathway “support”. To be diagnosed so early is a blessing, “but there is no question that she turns to drugs, each one stronger than the other, his mother said. It is better to tame the pain than to hide it! “.

Catherine knows what she is talking about: at 45, she has spent almost half her life in pain without knowing that she was a carrier of adenomyosis – an internal form of the disease. She eventually had her uterus removed.

10% of women of childbearing age are affected

Like them, around forty women full of hope are gathered that evening to meet the team coordinated by Doctor Benjamin Cotte, surgeon-gynecologist at the private clinic of Val d’Ouest, and specialist in pathology. Still poorly understood, endometriosis is defined as the presence, to varying degrees, of tissue similar to the lining of the uterus outside the uterine cavity, causing fertility problems in four out of ten cases. According to the Ministry of Health, 10% of women of childbearing age could be affected.

While pills, surgery and other specific treatments are indicated in some cases, few patients manage to overcome chronic pain – pelvic, abdominal, digestive, during intercourse or when bowel movements. These disorders can sometimes be limited to the period of menstruation, “but in most cases, they have a strong impact on thehas qualityday to day life »insists Doctor Cotte, who imagined, in 2018, this complementary care pathway.

Over a period of six months, Endomaître offers patients group workshops and individual appointments with practitioners working on the physical (exercise, rehabilitation, etc.), psychological (communication, stress, etc.) and chemical (food in particular) aspects of the chiropractor to naturopath. The goal? Build a toolbox “so that women can better understand the disease and finally become actors in it »emphasizes Sylvie Girardot, nurse anesthetist and hypnotherapist.

Designated as a pilot territory for the national action plan launched in 2019, the Auvergne-Rhône-Alpes region was the first to structure its care sector (End’Aura) to promote care “multidisciplinary”, which is still set to develop within the framework of the control strategy announced at the beginning of the year. An obvious thing for Stéphanie, who took part in one of the very first sessions of Endômaître before becoming its secretary, and observes a request “significant increase” for these alternative programs.

Some women refuse medical solutions that they consider “brutal » Where “invasive”, others see it as a last resort when “conventional” treatments have not worked. An impasse often due to the slowness of the diagnosis – seven years on average, according to the EndoFrance association – which worsens the consequences of the disease and reduces the possibilities of soothing it.

→ DEBATE. Can the endometriosis plan put an end to diagnostic wandering?

This is what Céline, 40, has experienced and a constellation of ailments that date back to her first period. When she finally got a diagnosis a few years ago, her endometriosis had already reached stage 4, the most severe. While she is considering an innovative ultrasound treatment, the seriousness of her lesions leaves her no choice but to turn to surgery, in a specialized center in Lyon.

“Today, I don’t even count the number of organs II don’t have anymore, let go of the one who has lost all hope of finding her “before life”. Her body weakened, she can no longer move without a cane, and now presents the “disabled” card to park. For digestive pain, nausea and extreme fatigue, which are still present despite the medical treatment of the lesions caused by the disease, Céline is accompanied by professionals from the Chambéry hospital center: “Without this help, I would have given up. It feels like an endless fight…”

→ CHRONICLE. Endometriosis, the fight for visibility

Céline has also joined the Facebook group “Living better with endometriosis”, where nearly 20,000 women share advice for identifying the best support. All point to the same problems: the low effectiveness of most treatments, the difficulty of accessing care close to home, or the cost of care, the reimbursement of which requires recognition as ALD 31 (long-term illness). off-list duration). As for alternative programs, this “remains an additional expense »warns Dr. Cotte, who estimates the cost of Endometriosis at around €500 per patient.

In addition to the deployment of support care, “we will have to multiply the expert centers”pleads Professor François Golfier, head of the gynecological-obstetric surgery department at the Lyon Sud hospital center and president of the End’Aura network. Which reminds us that other levers of action exist, starting with the training of first-line professionals to reduce diagnostic delays and confusion: “Two years ago, the theme was not taught during medical studies: there is therefore an obvious gap in knowledge and listening! », regret the doctor.

Last month, 20,000 information leaflets were sent to GPs, pharmacists and nurses in the region.“We are starting from very far”, observes Valérie Desplanches, head of the Foundation for Endometriosis Research, launched in 2021 in response to the lack of data and figures on the disease. “Because it is feminine and because it touches on the taboo of menstruation, this pain has been silenced for too long, recalls the professional, who places her hopes in the progress of science. Support for these women must now be a priority for research, particularly clinical research. »

Last January, the French government has announced the launch of the first national strategy to combat endometriosis.

Among the issues displayed : improved diagnosis, better care with possible reimbursement when the symptoms are active and proven over the long term, training of health professionals, and research for technical and technological innovation.

This unique plan should benefit an envelope of 20 million euros, spread over five years.