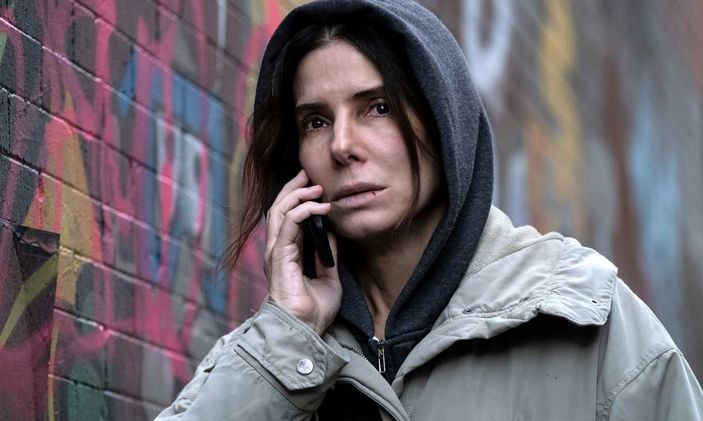 Star Sandra Bullock made an impression when she transformed into a murderer in the drama “The Unforgivable”.

Parents died early, Ruth Slater (Sandra Bullock) raised her younger sister Katie (Aisling Franciosi) from a young age. Once, she accidentally murdered the sheriff when the bank came to enforce her, trying to evict the two sisters to get the house back. Ruth was in prison and Katie was adopted at the age of five. During her sentence, she often sent letters to her brother but received no reply. After twenty years, Ruth was released from prison and moved to Chinatown to rebuild her life. She longs to see her lost sister again, but the law does not allow it, not to mention the son of the police chief is looking for her to take revenge.

The work marks the return of Sandra Bullock after a three-year absence since Bird Box (2018), also the second time the star cooperates with Netflix. Initially, producer Graham King wanted Angelina Jolie to play Ruth Slater when he announced the project in 2010. He even hired screenwriter Christopher McQuarrie – an Oscar winner with The Usual Suspects (1995) wrote the screenplay to fit Jolie. However, the plan was canceled and fell into silence until the end of 2019 when Sandra Bullock nodded in agreement to participate.

Sandra Bullock proves that Graham King didn’t pick the wrong man. Over 35 years in the profession, the star is associated with her gentle, sympathetic acting in rom-coms (romantic comedies) or blockbusters, earning her the nickname “American lover” (America’s Sweetheart). ). This time, Bullock decided to change his image with an unpleasant role, never even smiling on his lips. On the magazine People, the star said acting because she sympathizes with the character and the script reminds her of the daughter Laila adopted since 2015.

Incarnation of Ruth Slater, Sandra Bullock is ready to make herself ugly at the age of 57, often bare-faced, appearing in front of the camera with a shabby look. The role has a complex interior, requiring more psychological acting skills than action. Many star segments have to express emotions through eyes and facial muscles, not using dialogue. The character is tougher than Leigh Anne in The Blind Side (2009) – helped Sandra Bullock win the “Best Actress” award at the 2010 Oscars.

Sandra Bullock’s performance was critically acclaimed. The newspaper’s writer Richard Roeper Chicago Sun Times commented that the star is successful when incarnating a complex, lang-class character like Ruth. Page Screenrant thinks that she breathes life into the role, shining when portraying the emotions of a woman who is not forgiven by society. Sheet Polygon commented Sandra Bullock completely “makeover” in the movie, compared to Nicole Kidman’s performance in Destroyer (2018).

The screenplay is written based on the mini series Unforgiven (2009), which was a hit when it premiered on BBC in 2009. The series achieved an average of 7 million views, winning the “Best Drama Series” category at the Television Association’s RTS Program awards. Royal. The team changed the setting to Washington, adding details to suit American culture. Sitting in the director’s chair is Nora Fingscheidt, the screenwriting team includes: Hillary Seitz and Courtenay Miles and Peter Craig – who worked on two parts. The Hunger Games: Mockingjay (2014-2015).

The film’s story is told through many different perspectives, from the life of Ruth, Katie’s family to the revenge plot of the son of the sheriff. The script mixes two elements of drama (drama) and crime (crime), installing many details throughout the duration of 114 minutes. The flashbacks intertwine make the first half a bit confusing, the second half more engaging when everything becomes clear. At the end of the film, the screenwriters also try to incorporate a twist (unexpected episode) to create emotions.

The filmmakers focused on psychologically exploiting the main character Ruth Slater, thereby helping the audience better understand the fate of murderers. After being released from prison, Ruth struggled with life while finding a way to integrate into the community, doing enough jobs to earn money, from a carpenter to a fish processing factory worker. However, it was almost impossible for Ruth to make friends with anyone, not even visit her biological sister. Some colleagues, when they learned that Ruth was a murderer, immediately shunned her, some even beat her mercilessly.

The film also exploits the sin theme reminiscent of many classics such as The Shawshank Redemption (1994) or The Green Mile (1999). Although released from prison, Ruth is often haunted by the death of the sheriff. Her past crimes have made her unable to control her emotions many times. That’s also why Katie was psychologically affected, and the two police chief’s children grew up fatherless, determined to find Ruth to take revenge.

Besides Sandra Bullock, the work gathers stars like Viola Davis, Vincent D’Onofrio or Rob Morgan. However, the presence of the stars did not help the film be well received by critics. The work earned just 40% fresh on Rotten Tomatoes and 41/100 on Metacritic.

In contrast, audience scores are relatively good, with 81% fresh on Rotten Tomatoes and 7.2/10 on IMDb. Most of the comments praised Sandra Bullock’s acting, saying that this is one of the outstanding roles in the star’s career. The underrated comments said that the storytelling is simple, the script is less surprising, and many details are familiar.