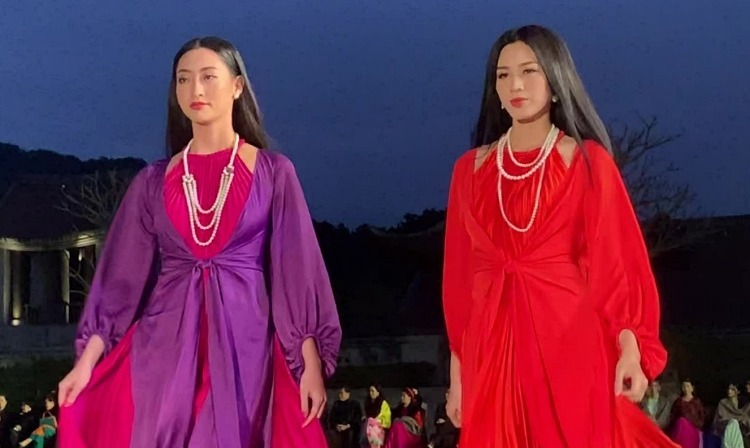 Three beautiful people dressed in red, matching robes, pearls, … with runner Le Hang appeared at the end of the show. Miss Vietnam 2020 Do Thi Ha is commented that the catwalk is more confident than the recent appearances. She opened and closed with Miss Luong Thuy Linh. Thanh Hang has a good performance as a vedette.

Wearing thin outfits, the beauties still try to keep their charisma and steadiness in every step. A large audience, including Miss Do My Linh, runner-up Phuong Nga … enthusiastically supported the show. Behind the scenes, the beauty queen hastily put on coats and scarves to warm the body.

Adrian Anh Tuan said he was excited about the show in winter. According to him, the tranquil scene and cold air match the spirit of the new collection. Each guest is presented with a designer shawl or tweed fabric. However, many people are still cowering while watching the show in the large garden at Yen Tu’s feet, on the evening of December 16.

During the 60-minute show, Adrian Anh Tuan presents a sequel to a collection that was performed 10 days ago at Vietnam International Fashion Week. Nearly 100 designs with bright colors, main red tones in the spirit of festival and Tet, on materials for the cold season such as Bao Loc silk, chiffon, brocade, tweed …

If as collection Yen last year – also performed in Yen Tu – towards a minimalism, in the collection Dig, pleated dresses with stylish cut lines, drapping technique becomes the highlight. The large peach petals are stylized sophisticatedly, from hand-drawn to printed, attached, designed by Son Doan – partner Adrian Anh Tuan – design. Collection continues to mark the harmonious combination of both work and life.

Digging mountain fields derived from the designer’s love for Northern culture. He recreated the image of a peach with silk overalls, combined with a robe shaped like a four-piece shirt. In addition, many models of Western fabrics such as cotton and tweed are also promoted by him, expressing the spirit of traditional blending modern.

The music played a part in blowing the soul of the North in the show, with familiar folk tunes mixed in the Ca trù style. Between the two collections, Hong Nhung appeared, singing and dancing on the lawn in the applause of the guests.