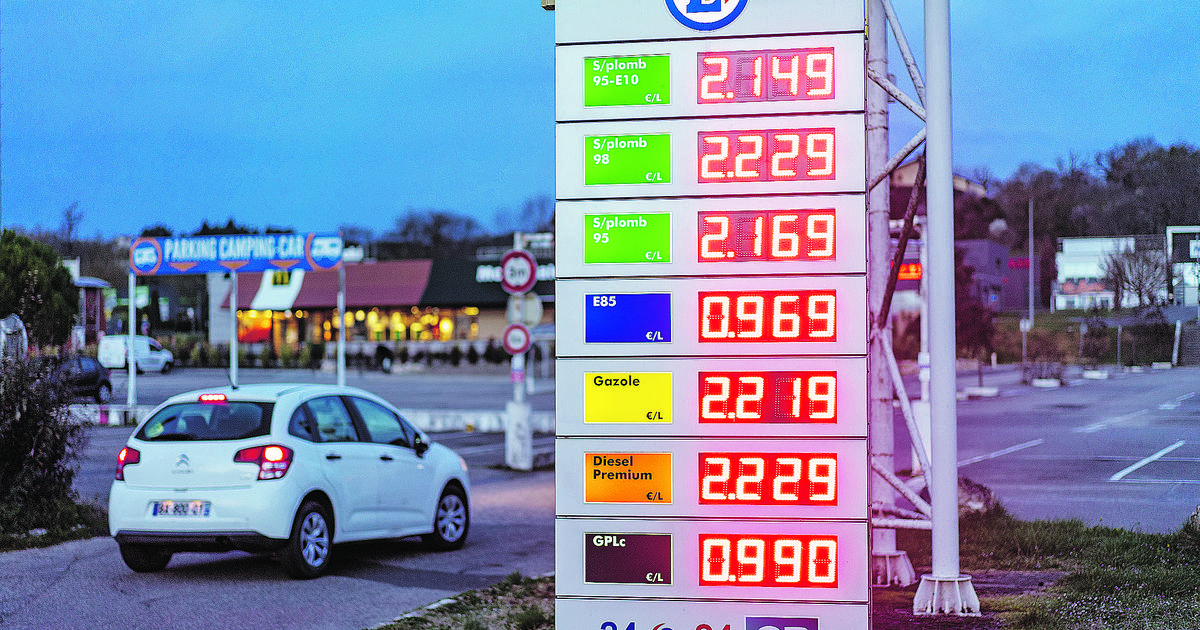 The executive is also working on a device for “big rollers”.

Less than a month before the presidential election, the government wants to avoid social unrest. While the prices of petrol and diesel are soaring at the pump, the Prime Minister, Jean Castex, announced on Saturday a discount of 15 centimes per liter of fuel, subsidized by the State. “This means that for every 60 liters you will save 9 euros”he detailed in an interview with the Parisian. The measure will come into force on 1er April for four months. Why wait three weeks? “Distributors need two weeks to be fully operational”we explain to Matignon.

Read alsoFuels: faced with soaring bills, could we “freeze prices”?

Until now, the government said it wanted to help mainly “big rollers” or the most modest. But, with fuels whose prices exceed 2 euros per liter, he finally changed his tune and opted for a boost for all French people, from individuals to professionals (trucks, construction, taxis, farmers, fishermen …), including those who are exempt from taxes and businesses. And it will cover all fuels.

Read alsoDiscount of 15 cents at the pump: “derisory” measure for Le Pen, “a little big string” according to Pécresse

The prices displayed at the pump will not be changed. The reduction of 15 centimes per liter will apply when paying by credit card at the pump or at the cash desk. The state will then reimburse the distributors. This temporary measure should cost around 2 billion euros to public finances. An amount which corresponds to the additional VAT earned for six months on fuels, with the rise in prices. “Everything is returned to the French”, advances Jean Castex.

At the same time, the executive calls on distributors and oil groups to “a complementary gesture”. “If the State makes an effort of 15 cents per liter, and if they make an effort of 5 cents, for example, it is indeed 20 cents that must end up in the pocket of the French”, underlines the Prime Minister. Negotiations have been going on for a few days. “It’s case by case. We hope that everyone will be able to take part in the efforts to the extent of their means.”advances a source close to the file.

On Saturday evening, TotalEnergies tweeted “welcomed the government’s announcement”. And to specify: “We confirm that our discount of 10 cents per liter still applies and is cumulative with this measure. » In mid-February, the French oil giant announced this reduction of 10 cents at the pump for three months in its service stations located in rural areas. Will it extend it to all of its service stations?

The government is also working on the development of a new permanent device to help “big rollers” to cope with the explosion of their fuel bill. “But that takes time. We won’t be ready in the next few weeks. This will be an element of the next five-year term. Hence the use of this temporary measure.we explain to Matignon.

The presidential candidates sharply criticized on Sunday the measure they judge, depending on the case, “electoralist” Where “ridiculous”. “The state is giving back the money from the gasoline hike, that’s what I asked for, the only question I ask myself is why on the 1er April “, wondered Valérie Pécresse, the president of the Île-de-France region and LR candidate. 1er April, it’s ten days before the election, the string is a little big. »

This temporary measure will increase the bill for the device by more than 20 billion intended to cushion the effects of rising energy prices, aggravated by the invasion of Ukraine. Among these are the blocking of the price of gas, the limitation to 4% of the increase in electricity, the exceptional energy check, the inflation allowance for 38 million people, or the increase in the scale of mileage allowances. The list will grow further as the government will unveil next week “a resilience plan” economic and social to cushion the shock of the war in Ukraine.

For Julien Aubert, deputy of Vaucluse (84) and support of Valérie Pécresse (LR), this measure “will cost the public finances dearly“.

EDF unions remain strongly opposed to government measures aimed at stemming soaring electricity prices for consumers and businesses. The latter announced on Saturday the filing of a complaint before the European Commission against the obligation imposed on the energy company to sell more nuclear energy at low prices to its competitors (alternative suppliers) within the framework of the “tariff shield”. A decree and two decrees published on Saturday in Official newspaper thus provide for a 20% increase (to 120 terawatt hours) of the Arenh ceiling for 2022: this mechanism provides that EDF sells part of its production to its competitors at a preferential rate. The government had announced this increase in January, to contain electricity bills in a context of sharp rise in prices, further reinforced since in particular by the Russian invasion of Ukraine. The operation, to which the direction of the electrician was opposed, will cost around 8 billion euros to EDF.

In addition, the Energy Regulatory Commission (CRE), an independent administrative authority responsible for ensuring the proper functioning of the electricity and gas markets in France, published three favorable opinions on these texts on Saturday at OJ.

SEE ALSO – “It costs 200 euros per month more”: Parisians worried about the rise in the price of gasoline