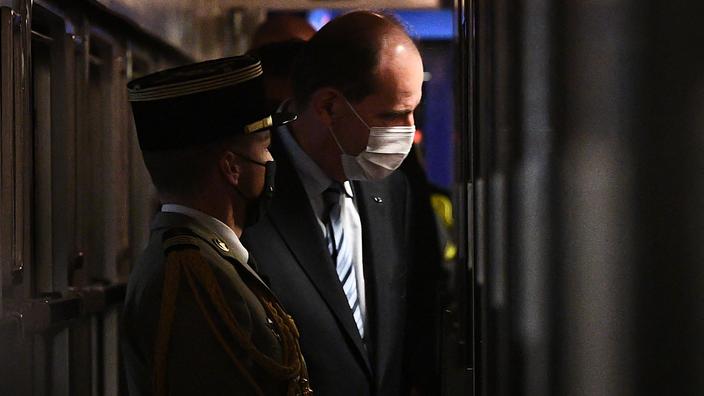 The Prime Minister left at 8:52 p.m. from the Gare d’Austerlitz, arriving in Nice twelve hours later.

“We are reopening this evening things that we had perhaps a little too quickly sacrificed”, launched Jean Castex while boarding the night train Paris-Nice, left Thursday evening after more than three years of stop. Passionate about trains from the nocturnal Toulouse-Paris of his youth, the Prime Minister took advantage of this inauguration to go to Nice in a bunk. Departing on time from the Gare d’Austerlitz at 8:52 p.m., the train should arrive at 9:11 a.m. on Friday on the Côte d’Azur. That’s six hours more than the high-speed train.

Open up the territories

“This first night train is a strong symbol, which signifies the rebirth of this mode of transport that some considered obsolete”, launched the CEO of SNCF Jean-Pierre Farandou, before also getting on the train. The night train, “It is also the return of the ‘slow life’, we take our time and we find the taste for travel, it’s like a small cruise”, while “The health crisis has also accelerated climate awareness”, continued Jean-Pierre Farandou. “I wish with you, since this is the choice of the State and the decision of the government, that this necessary reopening calls for many others”, launched the Prime Minister, before settling in his cabin.

Scheduled for April 16 and then postponed due to the health crisis, this launch with great fanfare must “promote a virtuous mode of transport which contributes to opening up the territories. Nice is ultra connected for CSP ++ but less for students and others“, Stressed the entourage of the Prime Minister to AFP. Tickets are available from 19 euros in a reclined seat, 29 euros in a second class berth and 39 euros in a first berth. The Intercités Paris-Nice, whose operation ceased in December 2017 for lack of profitability, will connect Paris-Austerlitz and Nice-Ville every day and in both directions, with six stops including Marseille, Toulon and Cannes.

Highlighting of the recovery plan

With this long journey in his agenda, Jean Castex wants to highlight a “rapid implementation of the recovery plan»Government, which devotes 5.3 billion to the rail sector, including 100 million for night trains: it provides 50 million for the cooling of 51 night cars and another 50 million for the reception of travelers and the adaptation of workshops . The government also wants to relaunch Paris-Tarbes at the end of the year. In the immediate future, the Paris-Nice will leave with the cars that normally go to Briançon (Hautes-Alpes), a link currently closed for works. The Prime Minister also wants to insist on the “ecological dimension»Of these journeys in berths or reclining seats: the train offers an alternative to the plane over these long distances.

Read also :The Court of Auditors skeptical about the management of stations

Around ten night trains in 2030

After the end of 2017 stoppage of Paris-Nice, heir to the prestigious “Blue train»Launched in 1886, a call for expressions of interest to find a buyer had been launched, in vain. The relaunched link could be the first in a new series of night lines. “My ambition is ten night trains in 2030», Declared the Minister of Transport Jean-Baptiste Djebbari in January. There were no longer – excluding stops linked to the pandemic or to works – than two night train lines in France, from Paris to Briançon, and from Paris to Rodez, Cerbère (Pyrénées-Orientales) and Latour-de- Carol (Pyrénées-Orientales). The cars of these surviving lines must be completely renovated by 2023, for 44 million euros.

Read also :The resurrection of night trains in France

A night network in perspective

A government report, published Tuesday by the Mobilettre newsletter, proposes to organize a bouquet of night connections – possibly seasonal – around the Dijon-Marseille, Bordeaux-Marseille, Paris-Toulouse and Tours-Lyon corridors, and reach large foreign cities. The rapporteurs take as a model the success of the Austrian company ÖBB with the constitution of a real network (Vienna-Amsterdam or Munich-Rome, among others) in a “socio-cultural context favorable to the environment and to action against climate change“.

The diagrams proposed in the report include, for example, a set of services from Metz-Nancy-Strasbourg and Zurich-Geneva to Avignon then Marseille-Nice, Perpignan-Barcelona and Toulouse-Bordeaux. Quimper-Nantes-Lyon-Geneva, Paris-Brussels-Hamburg-Copenhagen-Malmö connections or even the renaissance of Paris-Rome are also planned. In all, 600 cars would be needed – including 354 intended for domestic connections – for an estimated price of 924 million euros, as well as 60 locomotives, for a total bill of 1.45 billion, maintenance device included. The proposed night network would have a deficit of 26 million euros per year, a figure roughly equal to the current deficit of the two existing night lines. According to the ministry, the report published by Mobilettre is “an obsolete working version“, And”its final version will be released in a few days“.

Read also :With Ouigo, SNCF takes the train of rail liberalization in Spain

The very active collective “Yes to the night train“Welcomed the return of Paris-Nice, calling on the government to”commit without delay to release the necessary funding for the revival of night trains», With orders for new trains. The collective also proposes in a press release “rebalance competition between train and plane, by reducing VAT on train tickets and setting a floor price for plane tickets“.

SEE ALSO – 40 years of the TGV: the SNCF leaves its retirement a mythical train