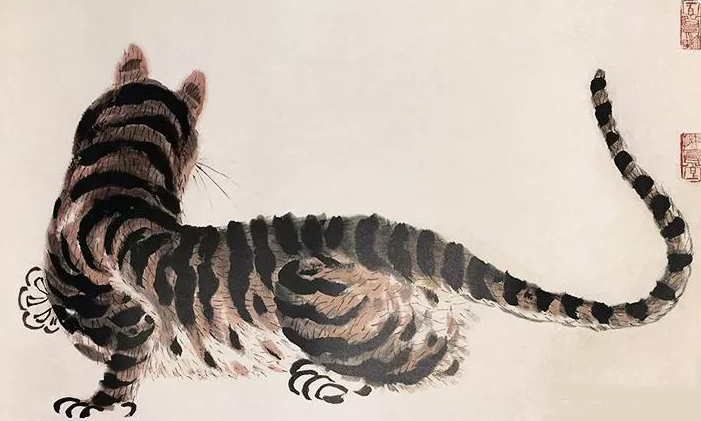 The tiger painting with only the back and tail was criticized by many people as “like a sick cat” but cost more than 32 million HKD (4.1 million USD).

Follow Artron, picture Tiger It is one of the most controversial works of Chinese painter Qi Baishi (1864-1957). After being hammered by Sotheby’s Hong Kong for 32 million HKD in 2010, the work aroused more and more discussion.

Truong Sieu Quan, in charge of Chinese calligraphy at Sotheby’s Hong Kong, said that the work was born in 1950, at that time, Qi Bach Thach gave it to a friend on the occasion of the Year of the Tiger, meaning a lucky and auspicious year of the tiger. The tiger is not depicted in its original form, but only its back is revealed, showing a “gentle, innocent” feature. The robustness of the tiger is shown through thick, bold veins. The thin tiger hair strokes make the picture come to life.

Above Sohu, an auction expert commented that the painting is unique, especially in the tail. When viewing tiger paintings, audiences often pay attention to their fierce faces, majesty and majesty. However, Qi Bach Thach’s paintings hide the tiger’s face, showing the animal’s friendliness and ease. The work shows his unique style, distinctly different from the painters. On the other hand, the picture implies the hidden wisdom of the true “strong man”.

Qi Bach Thach rarely drew tigers. In addition to the above picture, he also has a tiger back painting currently on display at the Palace Museum (China). Follow Zhejiangnews, the tiger back paintings of Qi Bach Thach also express his coldness, turning his back on fame and gain. He never dreamed of becoming a mandarin, was lazy to attend wine parties, didn’t care about gossip, didn’t compete with anyone, just immersed himself in art.

Tiger paintings show Qi Bach Thach’s consistent artistic point of view: creating something new, different, drawing according to his own feelings. He once said: “The beauty of a painting lies between ‘same’ and ‘dissimilar.’ The resemblance is too trivial, lacking the artist’s thought and perspective, otherwise it is deceiving the viewer.” He also advised his students: “If you study me, you will live, if you like me, you will die”, reminding students to find out the difference, otherwise the work will not have a lasting vitality.

These views helped make Qi Bai Shi a great name in Chinese painting. His forte is painting water, flowers, birds and fish. According to statistics by ArtPrice – a French market research company – in 2009, Qi Bach Thach ranked third globally in the list of artists whose works sold the most money, after Andy Warhol and Picasso.

Follow ArtnetnewsAt the end of 2017, Qi Baishi’s 1925 painted water painting was hammered at 930 million yuan ($146 million), setting the record for the most expensive Chinese artwork. He is also the first Chinese artist to enter the “club” of artists with works worth over 100 million USD.