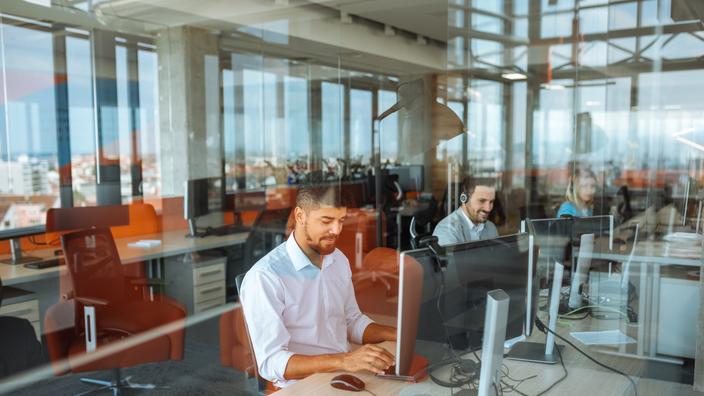 Since the confinement, the collaborative nature of the office space has been reinforced. And teleworking is not considered by employees as “the future”Of work, reveals the 7th Paris Workplace barometer.

In the “world after», Will the scale of telework be spectacular? The health crisis has changed the situation for remote work, which has imposed itself in the daily life of many French people since March.

Read also :The fatigue of private office workers: teleworking is (a bit) hell

The 7th Paris Workplace barometer, “After the crisis, where are we going to work?“, Tries to understand if the appetite of the French for teleworking has increased over the months. By interviewing a panel of 3,000 Ile-de-France employees in February and then in September 2020, Société Foncière Lyonnaise (SPL) and Ifop studied the impact of the spring confinement on their expectations in terms of the working environment.

“The office is not dead, sums up in Figaro Dimitri Boulte, Deputy CEO of SFL. We might have thought that the widespread practice of teleworking would call into question the importance of a common workplace for employees. But it was far from the case“.

Employees very attached to the office

In many companies, teleworking was previously reserved for the most experienced employees, enjoying a solid capital of trust with their employer. However, in France, four out of ten stations are practicable from a distance.

54% of regular teleworkers, outside the confinement period, say they suffer from a feeling of isolation or loneliness in the company

Being able to telework is a demand that existed long before confinement, in exactly the same proportions. In February, 87% of Ile-de-France employees wanted to telework at least one day a week, against 86% in September. While remote work can be justified in certain cases, it is not considered by employees as “the future” work. Once the coronavirus crisis has passed, only 8% of them would like to work exclusively remotely.

Overall, the French remain very attached to their workplace. 63% of employees surveyed want to work at least three days a week in the office. However, once the crisis has passed, the French want to telework a little more than before. Between February and September, their ideal number of teleworked days dropped from 1 to 2 per week.

More than a workstation, the collaborative nature of the office space has been reinforced since the confinement. “The health crisis has only accentuated basic trends, such as the bonus for the accessibility of offices for employees, the availability of local services in the neighborhood and the desire to work in an engaging, bright and conducive to meetings with colleagues», Specifies Dimitri Boulte.

A framework inspired more by the codes of the hotel industry to stimulate the creativity and innovation of the teams. Once the health crisis is behind us, the real challenge for companies will be to provide their employees with an office experience that is not the one they can have at home. Office real estate is far from dead, but it needs to reinvent itself.

A non-negligible need for social links

Certainly, teleworking would make us between 5% and 30% more productive, according to a recent study conducted by the General Directorate of the Treasury. But beyond the practical aspects, what about the psychosocial aspect? Prolonged remote work can be difficult for some French people to whom it is imposed. 54% of regular teleworkers, outside the confinement period, say they suffer from a feeling of isolation or loneliness in the company. This is twice as much as other employees.

“The second confinement only reinforces the teachings of the first. The risks of burnout linked to the feeling of isolation from telework are now well identified, including by the government“, valued. Teleworkers are also more likely to fear being made redundant.

All generations combined, an overwhelming majority of employees favor physical exchanges. “The office is no longer the place of production of work strictly speaking, but rather that of conviviality and intergenerational social bond. It serves to maintain the commitment and strengthen the corporate culture of a company“, Explain

“Social life with colleagues” is the first reason to come to the office for 55% of employees. A feeling that has increased over the months since the first confinement, with a jump of 8% between February and September. This need for social ties is even more present among young employees. 55% of those under 30 consider that their colleagues “ are also friends ”, Ie 26 points more than for their counterparts over 50 years old.

In the coming years, a hybrid model alternating between teleworking and face-to-face work is emerging and hints at potential changes in real estate demand. “We could consider, on the one hand, a saving in office space. And secondly, an investment dedicated to upgrading the available space to make the office more attractive to employees.“. Particularly thanks to its location in the city and its aesthetics.

Because young employees are less inclined to spend time in transport than their elders. The majority of those under 30 are even prepared to cut their wages by 5% to be able to work within 20 minutes of home. And for 44% of them, the work area weighs in the choice of joining their company, against 29% among employees over 50 years. The social function of the neighborhood is indeed of great importance. Medical consultation or sports practice, young employees prefer to perform activities around their work area, rather than in the area where they live.

TO SEE ALSO – Teleworking: Laurent Berger denounces “a strong weariness, we see it with the increase in long-term sick leaves”