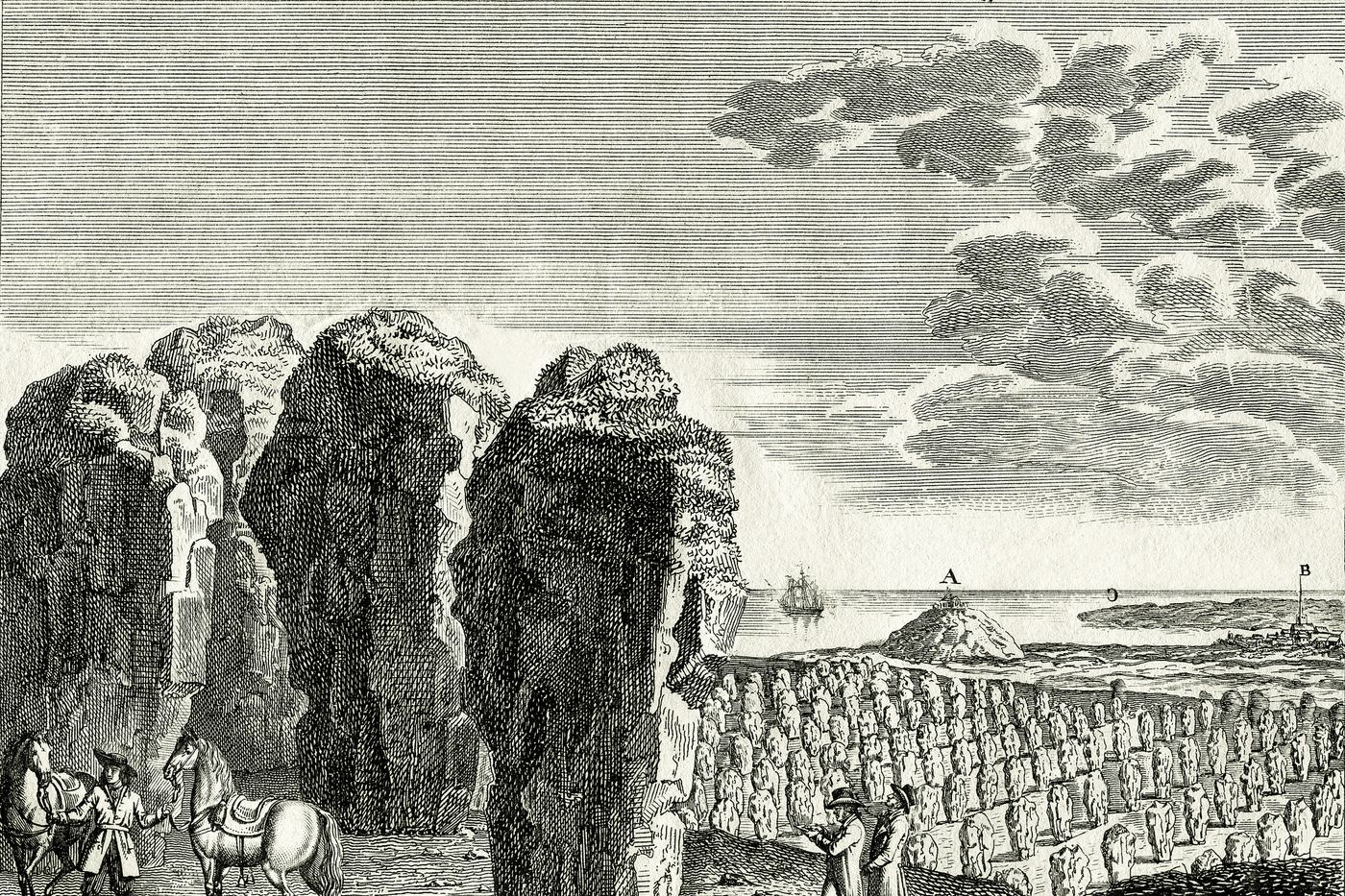 They stand as fantastic pioneers in the Neolithic landscape. The megaliths of Carnac and the banks of the Morbihan are nearly 7,000 years old. Much older than the great monoliths of Stonehenge across the Channel, erected in the Bronze Age, they quite simply form one of the first sets of monumental architecture in the world.

→ DEBATE. How to reconcile tourism with the preservation of the megaliths of Carnac?

To identify this carnacean phenomenon, “In the end, we have to account for an excess. Never have we seen at that time so many elevated tombs concentrated in such a small area, arms and ornaments made of polished rocks of such distant origin, works of stones in such great number erected that the gaze of them. loses wanting to follow them on the horizon “, says archaeologist Serge Cassen in Carnac. Story for a picture book (1). While this territory dreams of being classified as a UNESCO World Heritage Site, this book takes stock of the latest discoveries, with spectacular progress.

Hundreds of standing stones under the sea

“The excavations around the Great Menhir of Locmariaquer, from the end of the 1980s, upset our approach”, traces Christine Boujot, from the regional archeology service (SRA) of Brittany. They show that this menhir, far from being isolated, originally belonged to a double alignment of stelae, themselves connected to the Er Grah tumulus, just next door. And this from the first half of the Ve millennium BC AD, when it was believed these monuments from the Bronze Age. “We have launched surveys in search of similar associations, details this research engineer. But we did not expect to bring to light so many forgotten megaliths… ”

→ FILE. The Neolithic, at the root of our contemporary societies

Take the menhir, emblem of this Breton country. Does the tourist measure by crossing these large pebbles, a little scattered, that they are now several thousand recorded on this coastal strip? “In the Carnacean area alone, from the Étel estuary to the Penerf estuary, in 2020, 188 works of alignment of stelae were counted, either in straight parallel or perpendicular lines, as in Carnac, or in an arch of circle, as in Er Lannic “, notes Serge Cassen, research director at the Archaeological and Architectural Research Laboratory (Lara) at the University of Nantes.

And we never stop discovering it. In 2006, around sixty blocks of gneiss were found, lying under a thick layer of earth, during a preventive excavation in Belz. Connected to a line of menhirs preserved in an adjacent plot, they formed a set of at least 300 meters long. A year ago, another preventive excavation in Plouharnel unearthed the remains of a funeral cairn and the wedging pits of three large unconscious menhirs.

The sea, whose level in the Neolithic era was at least three meters lower, holds other surprises. In 2001, 46 menhirs were identified at low tide on the Kerdual plateau in La Trinité-sur-Mer, in connection with a large burial mound on the ground. From 2005 to 2009, a sonar prospecting program, supplemented by geomorphological analyzes and diving, detected even more spectacular sets of underwater stelae: 150 menhirs submerged in front of Saint-Pierre-Quiberon, divided into 18 or 19 lines. Even more than in Carnac which has only 11! In total, more than 1,750 submerged monoliths can be found today in this Carnacean area.

Green rocks from the Alps and Andalusia

The tumuli, neglected for a long time because they were eroded and hardly visible, were the subject of the same systematic research. These mounds or cairns (heaps of stones) each enclose a “cistus”, or funerary chest made of slabs. There are more than 200 of them in this small territory in the south of Morbihan, erected between 6,700 and 6,000 years before our days. To which must be added 358 dolmens, collective passage tombs, which gradually succeed the primitive mounds. A vast funerary landscape, dominated by three giant mounds, veritable “royal burials” associated with deposits of polished jade axes and ornaments: Mané er Hroëk (16 meters high), Tumiac (34 meters) and the tumulus of Mont Saint -Michel (44 meters), the most have you seen me!

The richness of these deposits has long intrigued. In 2003, amazement: the Jade program, carried out with Pierre Pétrequin, shows that these sacred axes come from a site in the Alps, more than 850 kilometers away. In 2015, Guirec Querré, from the archeosciences laboratory at the University of Rennes 1, found the origin of the greenish variscite beads from these same funeral deposits… in Andalusia! The precious material would have been transported by boat to the shores of Morbihan.

On the trail of the giant squid

Would these Breton peoples have been excellent navigators? Archaeologists have proven that they transported tens of tons of menhirs from one site to another by water. And many engravings discovered over the last ten years on the megaliths of the territory, thanks to photogrammetric surveys in 3D, confirm their maritime tropism. In the dolmen under a cairn on the island of Gavrinis, entirely covered with engravings, Serge Cassen thus unearthed the silhouette of some thirty boats, with or without crews, heckled among the interlocking semicircle patterns of this tomb. He also identified the silhouette of two sperm whales that archaeologists had mistaken for ax plows.

“In total, we have spotted about fifteen of these cetaceans engraved on Carnacean monuments”, he says. Next to another mythical animal: the giant squid. “It was the memory of Moby Dick that put me on the track”, says the archaeologist. Intrigued by filaments and protruding eyes, he ended up recognizing six of these cephalopods – the sperm whale’s favorite prey – on the megaliths of Gavrinis, Pen Hap, Runesto, Kercado, Mané Rutual in Morbihan, and Tévenn in Finistère. Even attenuated by time, the richness of these engravings where axes, throwing sticks, bows and arrows rub shoulders with birds, snakes, cattle or goats, contributes to the unique character of Carnacean megaliths.

The most innovative contribution of Carnac, story for a picture book stems from its analysis of the strategic location of all these remains. “For a long time, we saw them as a sum of monuments disconnected from each other. In fact, it is a real network that shapes the landscape ”, emphasizes Christine Boujot of the Brittany SRA. The rediscovery of numerous buried or submerged monoliths allows us to better understand the large groups and their interaction. The three monumental royal tombs – landmarks visible from afar, including from the sea – seem to delimit an area of ​​influence, real or symbolic, each associated with long stelae bars.

Supported by maps, Serge Cassen demonstrates how the great tumuli of Mané er Hroëck and Tumiac each dominated one side of the estuary of the Vannes and Auray rivers (today the entrance to the Gulf of Morbihan). The large tumulus of Mont-Saint-Michel, linked to the alignments of Carnac, controlled the seaside (to the south) and the Gouyanzeur basin (to the north). The latter contains a very important concentration of tumuli. All around, on the reliefs, numerous stelae bars form “Magical defenses of one space against another », Writes the archaeologist. Remarkable detail: depositions of polished axes, far from being located in the heart of the richest tombs, “Take place on the river-maritime entrances and at the major interruptions of the stelae works”. As if these dangerous places of passage had called for the sacrifice of precious objects.

Salt, the key to the prosperity of this “little sea”?

There remains an enigma. How to explain such a concentration of monuments and wealth in such a small area? The Breton acid soils having eaten away most of the skeletons and wooden constructions, archaeologists have few clues about the life of these peoples. But these shores of Morbihan, “the little sea” in Breton, seem to have offered a very favorable environment. In the Neolithic, with lower water, this lagoon system extended to the islands of Houat and Hoëdic.

“This silted bay offered a very rich ecosystem, full of fish, shellfish, migratory birds and game on its shores. The proximity of the Loire estuary has been able to encourage the contribution of innovations. Hunter-gatherers seem to have settled here from the 6the millennium BC “, observes Serge Cassen. He takes as proof of this two large Mesolithic necropolises found on the islands of Téviec and Hoëdic, with the beginnings of architecture and social hierarchy.

What if the secret of the Carnacean megaliths lay in a few grains of salt, the white gold of the Neolithic? “Unusual ceramic dishes discovered in the tombs of Mont Saint-Michel or Er Lannic could have contained”, says the archaeologist. In the bay of Quiberon, the production of these crystals, a crucial commodity for the preservation of food and a precious currency of exchange, could be at the origin of the majestic flowering of the Carnacean heritage. “The proof is still lacking in Morbihan”, admits Serge Cassen cautiously. But this subject could reserve other great discoveries in the future.

Towards a “Unesco World Heritage” label?

In 2012, the registration file Landscapes of megaliths of Carnac and the banks
from Morbihan to Unesco World Heritage was launched.

In June 2021, the perimeter to be classified was validated by the French Property Committee
world heritage, with four areas including nearly 400 monuments over 17,000 hectares (105,000 with the buffer zone), 27% of which are in the maritime zone (see map).

By 2023, a management plan must be drawn up to preserve and enhance these sites. Then the French Property Committee will submit this candidacy to Unesco, knowing that it can only submit one per year.

The perimeter that would be proposed for UNESCO World Heritage classification.