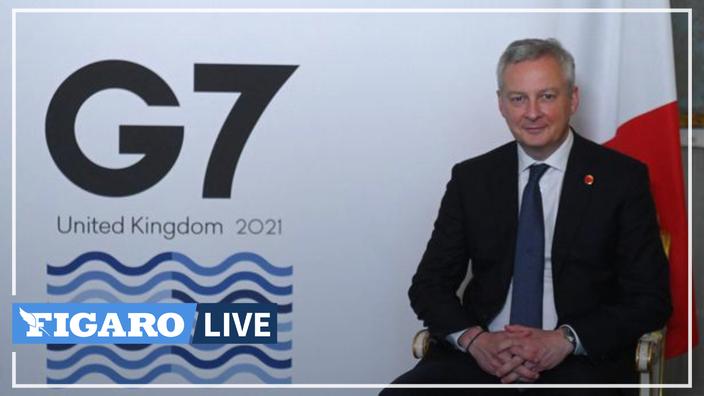 “We have reached an agreement on the international taxation of the 21st century”, greeted Bruno Le Maire at the end of the meeting.

White smoke. Meeting in London since yesterday, the G7 finance ministers announced that they had reached an agreement this Saturday on a tax reform targeting multinationals and the establishment of a global minimum tax on companies. Objective: to continue the work initiated within the framework of the OECD on this dossier blocked by the previous American administration, and to fight against tax evasion by large companies, foremost among which are the Gafa.

The members of the G7 notably agreed on the principle of a “global minimum corporate tax“For large companies, at the rate set at”at least 15%“. The latter is certainly less important than the 21% proposed by the White House a few weeks ago, but it should make it possible to establish “a fairer playing field for UK businessesBy fighting against tax havens, according to the British Chancellor of the Exchequer.

“We have reached an agreement on the international taxation of the 21st century“, Greeted Bruno Le Maire in a video posted on Twitter. “France can be proud“Of this step, which should allow in particular”fair taxation of digital giants” and an “minimum taxation of corporation tax (sic), to avoid tax evasion and optimization which rightly revolt our compatriots“. The minimum corporate tax rate is set “at a minimum of 15%“, Specified Bruno Le Maire, who counts”to fight»To increase it as much as possible during the next scheduled meetings on this file.

Some would have liked the G7 to go further, by establishing a higher minimum corporate tax rate. This is notably the case of Oxfam, which described the agreement as “discount compromise“. “The rate of 15% is simply too low“, Considers the organization, which denounced the”lack of ambitionOf Europeans in this fight. Bruno Le Maire emphasizes that the rate of 15% is only a “starting point»Future negotiations to revise it upwards.

G7 members, including France, Germany and the UK, also hailed constructive meetings and a promising multilateralism victory for the future. US Treasury Secretary Janet Yellen noted the “unprecedented commitmentFrom the G7 ministers. The minimum corporate tax rate “end the race to the bottom of corporate taxation», She judged.

First Gafa to react, Google said it supported “strongly work in progress […] We hope that countries will continue to work together, to ensure that a balanced and lasting agreement will be finalized soon.“, Said the firm. Shortly after, Facebook also congratulated “significant progress made in the G7”, Through its public affairs manager, Nick Clegg. “We want the international tax reform process to be successful, and we recognize that this could mean Facebook will pay more taxes, in different places.», Wrote the representative.

At the same time, the taxation weighing on the largest groups must also be reviewed. “We are committed to reaching a fair solution on the distribution of taxing rights, with market countries being granted taxing rights on at least 20% of profits exceeding a 10% margin for the largest multinational companies and the most profitable“, We read in the press release. In short, part of the profits exceeding the 10% margin will therefore be “reassigned, then subject to tax, in the countries where they make salesRishi Sunak said. The idea is, once again, to avoid tax evasion by large companies and “meet the tax challenges arising from globalization and the digitization of the economy“.

Still, this engaging stage does not mean that this subject is coming to an end. The members of the G20 will meet next July in Venice to continue the work started. Discussions will take place between now and then, including this month. Behind, the 138 OECD countries will have to support the text, in principle by the end of the year. The ministers say they are waiting “impatiently“A future final agreement,”historical”, Within a few weeks.