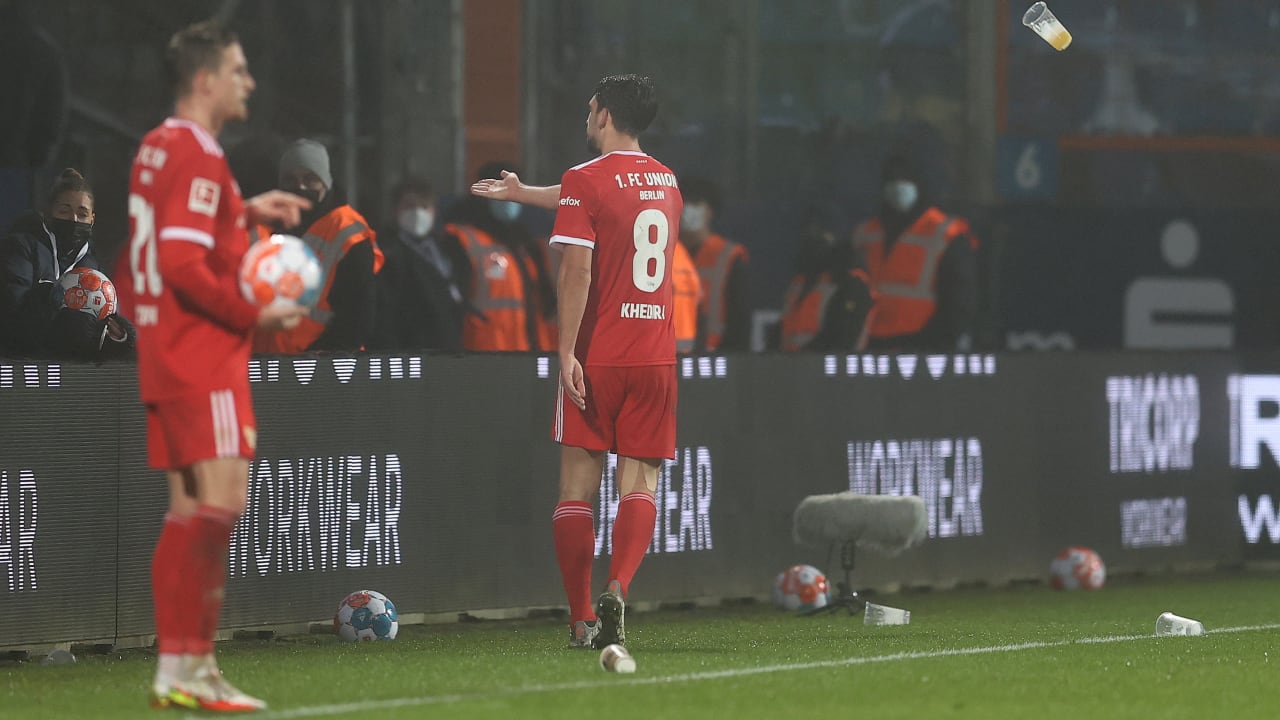 VfL fans cause trouble! During the entire game on Saturday afternoon, Union’s 1-0 victory in Bochum occasionally landed drinks cups from the stands in the interior. It got intense in the final phase. Shortly before the final whistle, they flew in rows in the direction of the Berliners. The protocol of the beer mug scandal.

85th minute: Cups fly towards Union Bank. Trainer Urs Fischer turns around, on TV you can hear what the Swiss man calls to the main stand: “Hey, are you crazy, folks? Hey, aren’t you guys tight? “

87th minute: After a pass, Kevin Behrens is offside. The VfL supporters wait for the assistant flag to be raised, but the Union Joker does not intervene, but Rani Khedira comes from behind, but injures himself in a duel with defender Masovic and remains lying down. The game continues.
Bastian Oczipka rudely straddles Bochum’s Pantovic on the left. Clear yellow card – actually. But referee Reichel runs back into the other half, where Khedira is still lying. The midfielder gets up and limps back to his own half. The crowd rages.

90th minute: Kevin Möhwald replaces Khedira, who has to leave the field on the back straight. Khedira even finds a lighter on the lawn, which is believed to have been blown from the stands. He throws it aside. The next 150 meters around the outside of the bank become a gauntlet for him. Cups fly every second.

90th + 2 minutes: Union gets a corner kick, cups land permanently on the corner flag. The professionals of the Iron take their time with the execution. Reichel indicates that he is also re-enacting this. Original stoppage time: four minutes.

90th + 5 minutes: Reichel whistles. The already replaced Max Kruse shouts “Yes” and turns towards the main stand. Around ten young VfL supporters are standing behind Unions Bank, hitting the roof. Fitness coach Martin Krüger has a battle of words with these fans, but is held back by team members.

After the game, Kruse said in the WDR2 interview: “Today was another day when all Ruhrpott Assis gathered in Bochum and thought: Let’s go to the stadium again.”

Bochum’s CFO Ilja Kaenzig (48) in the evening to BILD am SONNTAG: “It is almost normal for a beer mug to fly, but we didn’t know this extent either. That is problematic and that must not happen, even if the frustration was particularly great this time. “

Union has the three points. VfL is now threatened with a hefty fine.