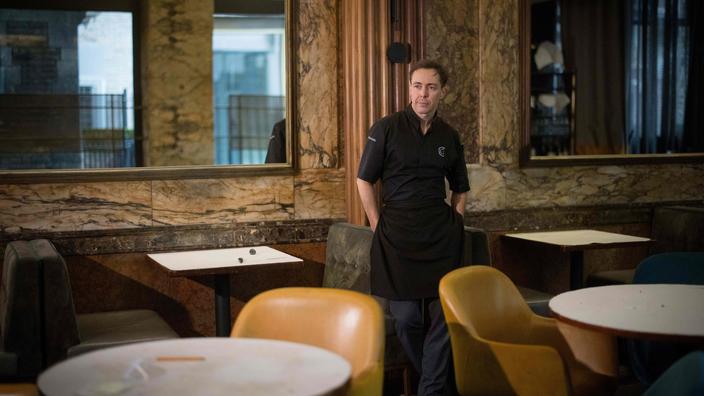 The restaurants will “probably not” reopen on January 20, according to Alain Griset. But the new aid allocated since this fall should save the majority of them from bankruptcy.

“It’s good to yell at the government when you need help, but you also have to know how to recognize when it is satisfactory.. ” Xavier Denamur, the sparkling boss of the restaurant Les Philosophes in the fourth arrondissement of Paris, was one of the first to complain about the meager aid granted to restaurateurs during the first confinement in the spring. Like others, he has since changed gear. Certainly the Minister in charge of SMEs Alain Griset announced this Sunday, January 3 a “likely” postponement of the date of reopening of restaurants initially scheduled for January 20. But more and more professionals in the sector consider that the solidarity fund – up to 10,000 euros or 20% of the usual turnover per month – coupled with short-time working should make it possible to avoid the bankruptcy of a company. good portion of restaurants for the next few months. Even if large restaurants or chains, faced with heavy rental charges, are likely to suffer more than small bistros.

Read also :Why two-thirds of restaurateurs miss out on the state-guaranteed loan

According to Alain Griset, interviewed on Europe 1, it therefore seems “unlikely” that the restaurants reopen on the date initially announced by Emmanuel Macron, that of January 20. If Bercy does not wish to comment on the information, this prospect absolutely surprises no one among restaurateurs. “We are not surprised and had already warned our members that they should expect to remain closed for a while longer, explains Marcel Benezet, for example, the president of the cafes, bars and brasseries of GNI-Synhorcat, one of the main groups of professionals in the sector. I knew very well that we were doomed to close at least until February. But today, we would already find it wonderful to open in March!“Cosimo Fabra, manager of three restaurants in rue Guersant (17th arrondissement of Paris), is not falling for nothing, either. “From the start, I am convinced that it will be three months after Christmas Eve, he said. The government has eased the pressure for the holidays, it will have consequences. ”

During the spring confinement, aid for restaurateurs was deemed insufficient by professionals in the sector. But in October, a new envelope of up to 10,000 euros per month for restaurants which have reduced their activity by at least 50% has apparently convinced restaurateurs. “If we keep these 10,000 euros, partial unemployment and the few deliveries that we manage to make, there is no reason that we cannot last a few months, Cosimo Fabra believes. The aid is still up to the task, we can’t complain: our situation may seem catastrophic in France, but when we look at what is being done abroad, we are privileged.A finding that Xavier Denamur widely shares. “I hear the restaurateurs screaming, I hear their dismay and their anger, but we fought to be supported, and now we are, he estimates. I prefer that we wait to open under normal conditions, rather than reopen under these conditions of m …“

However, all restaurants are not equal in the face of this crisis. Admittedly, since the beginning of December, restaurateurs can choose between aid of 10,000 euros and compensation up to 20% of their turnover for the previous year, which benefits managers of large businesses. But for Alain Fontaine, president of the French Association of Master Restorers, this is not enough. “Some small restaurants will be satisfied with aid and will be able to overcome this crisis, he explains. But the biggest, from two million turnover per year and who do not own the walls, are not going to get by. They often have a large rental charge, which exceeds 10,000 euros per month. In my opinion, we should still make a little effort and push this aid to 30% of turnover.“

Read also :In Monaco, restaurants reserved for residents and workers of the principality

Besides the strictly financial aspect, restaurant owners are especially morally exhausted after a chaotic year for the sector, according to Marcel Benezet. “Business leaders are starting to have psychological weaknesses, he explains. We are people of communication, friendliness, all of that is missing. Today the situation will become psychologically complicated for many of us, and that is likely to do more damage than the coronavirus. ”