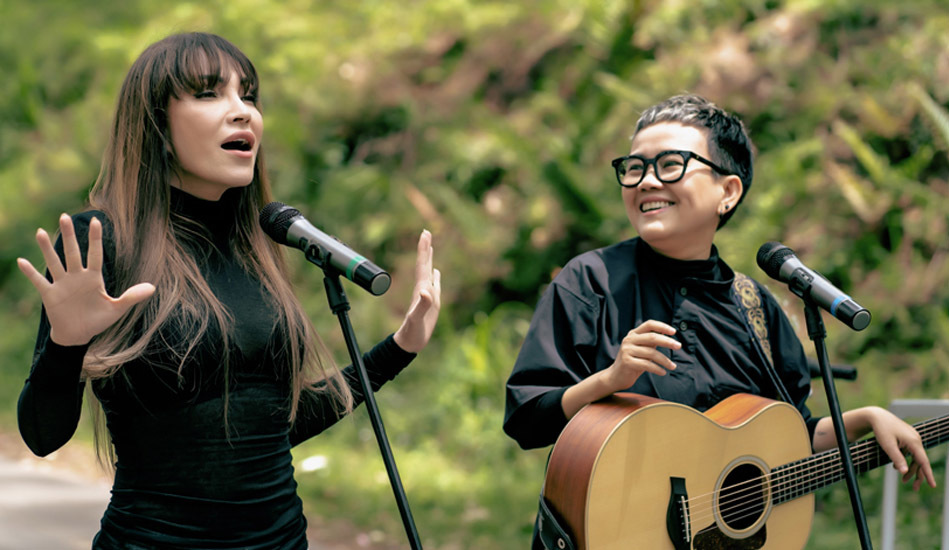 Artist couple Thanh Ha and Phuong Uyen share the joys and sorrows of life, their passion for the profession at the age of over 50.

At the joint album launch Together there is the whole world In Ho Chi Minh City on June 10, Phuong Uyen and Thanh Ha sang about the happiness of finding each other in music. Former member of Ba Con Meo praised Thanh Ha for singing well and said: “There are few singers who, when singing, touch my heart like that. I think having a soulmate appearing at the right time, singing to me is a blessing. very wordy thing”. The overseas vocalist replied, “I also get lyrics when someone composes songs for me.”

For nearly 30 years in the profession, Thanh Ha has only been singing Phuong Uyen since the two knew each other a year ago. In April, during a private concert in Ho Chi Minh City, the original voice of Da Nang performed the song If only we didn’t love each other by Phuong Uyen. The two sat side by side on a chair, sometimes the musician leaned and put his arm around Thanh Ha’s shoulder. The singer gave former member Three Cats a kiss on the cheek to thank her for helping her organize the program.

Thanh Ha’s voice serves as a fulcrum for Phuong Uyen, in exchange for the musician’s talent for the trust of overseas vocalists. As a joint program, the musician calculates and counts so that each song and performance honors Thanh Ha’s inner voice. Former member of Ba Con Meo said: “In each song, the two sit and talk a lot. I passionately talked to Ha about what I would do with my composition.”

The 11 songs on the CD have two chosen by them as a duet – Life is lucky with you, With each other there is the whole worldas a way to show affection at present. Ballads sung by Thanh Ha, while Phuong Uyen performed a strong, rock-sounding song. The musician said that in the studio, there was no song on the album that they sang for the third time. Only composing, writing lyrics, and harmonizing lasted all year. Phuong Uyen loves her time making albums because she can live with her own music.

In addition to music, the two share everything in life. Before meeting Phuong Uyen, Thanh Ha was depressed because of weight gain and an unsatisfactory love story. The singer said that there were many sleepless nights, feeling lonely and alone. She said: “There is nothing more terrible than being with someone like a habit, no longer loving, not wanting to talk, even cuddling. The more I hold on to that habit, the more scared I become and so I have no control. I can’t control my weight. I seem to have given up and don’t want to find happiness because I think it will end like that and I’m afraid of love.”

In the middle of last year, Phuong Uyen went to the US to visit her family as well as participate in a number of overseas programs. They have many opportunities to meet and talk. Gradually, the two felt that they were in agreement, so the singer took the initiative to find a musician to confide in. Former member of Three Cats said: “Every day she and I talk for about 5 hours. Ha’s stories can be written into a thrilling memoir. Suddenly, I feel a responsibility to help. because they both share the same love for the job.”

In the music night in early June, Thanh Ha wore her youth outfit 20 years ago and talked about the joy of wearing old clothes. She said she had tried all sorts of ways to lose weight before, but it didn’t work. However, when Phuong Uyen accompanies her, she is more motivated to practice. “I tell this story so people understand how important love is to me. Without love, I wouldn’t be able to sing,” the singer said.

From the day she met Thanh Ha, Phuong Uyen changed and opened her heart more than before. On June 9, the musician tried to live stream with an overseas vocalist for the first time while recording. Former member of Three Cats surprised to ask about the audience’s views. Thanh Ha teaches musicians how to talk to people. On their personal pages, the two constantly comment on each other’s statuses. Currently, the pair of artists share the same avatar as the cover of the CD.

Thanh Ha likes the momentum and beauty, so Phuong Uyen follows all the singer’s wishes, wearing the same clothes when appearing together. According to the musician, they are all family type and like to live a simple life. Last Christmas, Thanh Ha did not accept the show, and Phuong Uyen’s family celebrated the ceremony, regale. The singer also traveled with the musician’s parents and two younger brothers Ngoc Diep and Cam Tu.

Phuong Uyen said: “When fate comes, things don’t go according to plan. Everything is arranged as someone else is, we just keep working because we like to work together.” In the song Just a normal dreamthe musician wrote: “Life is peaceful, there are no tears / No parting, no one dies / The paradise we live in / No one judges / There is no right or wrong”.

The musician said that every day talking or arguing with Thanh Ha makes her find life interesting. And the overseas singer said: “Ha is no longer ‘Afraid of love’, but now it is ‘The life with you is lucky'”.

Thanh Ha was born in 1969, to a Vietnamese mother and German-American father. Many of her lyrical songs are loved like Cinder (music with Vietnamese lyrics), Fragile love about (Duc Tri), Fear of love (Hoang Nha). In early February, the singer announced her separation from her Filipino fiance – Roland Casiquin Jr – after many years together.

Phuong Uyen was born in 1970, together with her two younger sisters Cam Tu (1973), Ngoc Diep (1974) founded the group Three Con Meo. The group was active and quickly loved by the audience in the years 1990-2000 with a series of hits: Fairy Saigon in 2000, Mother loves… In 2001, the group disbanded. Phuong Uyen became a music producer, in recent years she also opened a music school.