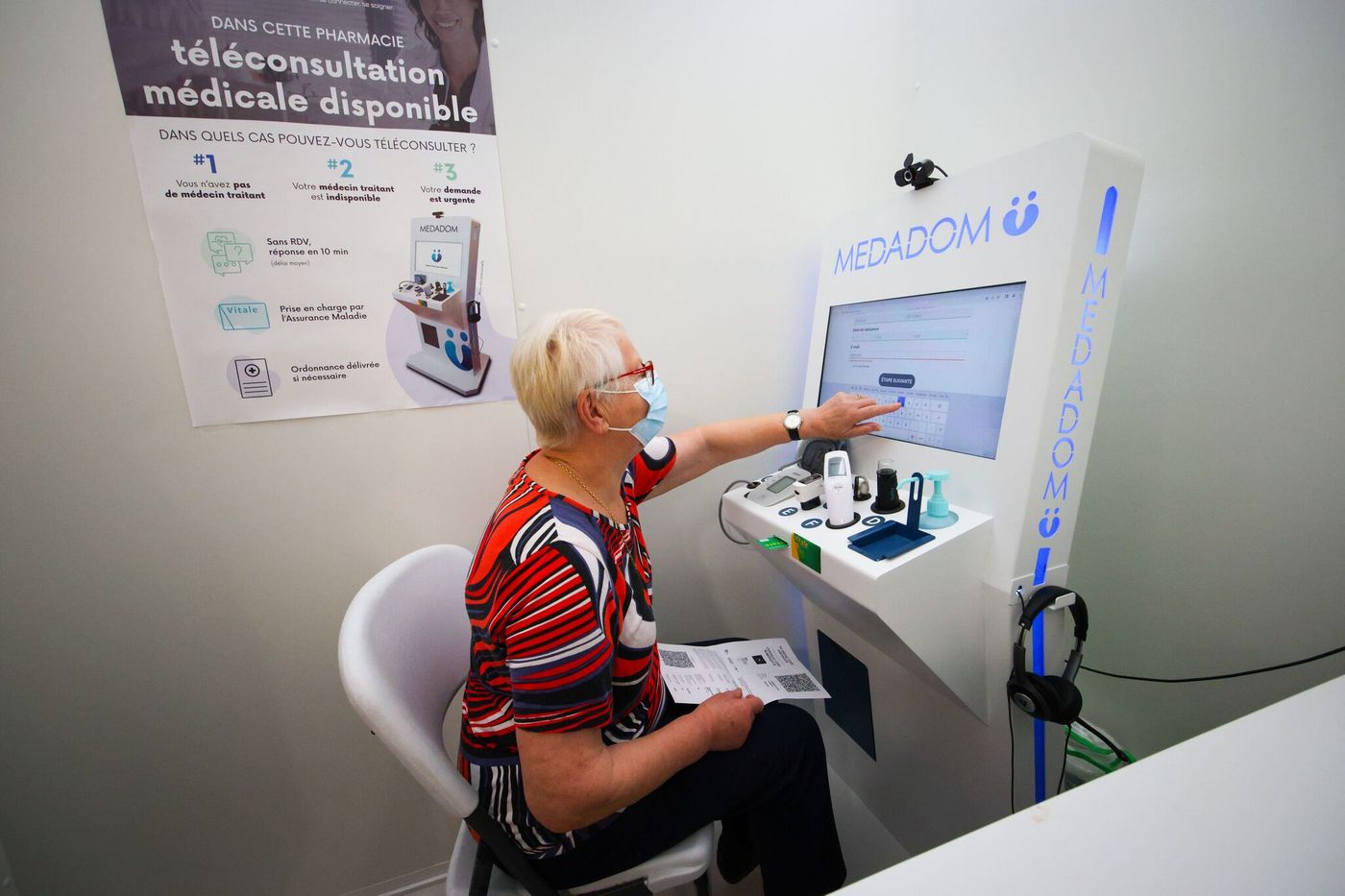 In a Parisian pharmacy, a white terminal clashes. Under the screen, six medical tools face each other, including a stethoscope, a thermometer or even a dermatoscope, intended to observe skin lesions.

“We have been organizing teleconsultations via this system for two years. We explain to people how to use the instruments, so that remote doctors can establish a diagnosis”, explains Lucie*, one of the pharmacists. Reasons for consultation? “Minor illnesses, such as colds or cystitis, but also a lot of prescription renewals”she explains.

2,500 cabins throughout the territory

Since 2017, the Parisian startup Medadom has delivered 2,500 cabins of this type throughout the territory, involving more than 250 doctors. “This makes it possible to respond to the problem of medical deserts”, explains Eli Dan, one of the co-founders.

But, for a former executive of the Union of Community Pharmacists, the approach is above all economic: “The monthly subscription costs more than €200. For doctors, this service allows them to take on more patients at extended times, because a teleconsultation is shorter than a traditional consultation. »

Pharmacies, too, benefit from this. In Lucie’s, the clientele has increased by 5% with the Medadom terminal, which allows tele-consultation including on weekends. “After getting their prescription, patients buy drugs at our facility. It’s a win-win,” she concedes.

The reimbursement of the teleconsultation extended

During the pandemic, these teleconsultations were 100% covered by health insurance. The measure was to end on December 31, 2021, but the government announced its extension until September 30, 2022, on two conditions.

The patient must first be referred by his attending physician or, in his absence, by a health center or another territorial organization. The teleconsultant doctor must also be located near the patient’s home, in order to organize a face-to-face consultation if necessary. A condition which is however not required in “areas where the supply of care is weak”, reminds health insurance.

However, according to Anne Giannotti, president of the MG France union, patients on private teleconsultation platforms, such as Medadom or Livi, often do not respect these conditions, although they benefit from reimbursement. “They do not go through their general practitioner, because they know that teleconsultation makes it easier to obtain antibiotics, for example”, she illustrates.

The condition of “prior knowledge of the patient”that is to say the fact of having received it in physical consultation in the previous twelve months, was removed at the end of 2021. “Once a week, we have to call to order people who do too many teleconsultations, in order to encourage them to go see their doctor”, admits Jonathan Ardouin, general manager of Livi.

These fears are shared by the Council of the National Order of Physicians. “The offers of reimbursable care services made by interchangeable practitioners and located in the four corners of the national territory come between patients and their local doctors”, can we read in a 2020 report. For its part, the health insurance recognizes it: “The existing rules do not adapt well to these platforms, which is why we asked the government to create a specific statute. »

The problem of work stoppages

Especially since another problem has become massive: that of work stoppages. “We have seen that many go through these platforms to obtain one”, relates Luc Duquesnel, president of the Les Généralistes – CSMF union. On the Medadom website, the company specifies that doctors can issue “a work stoppage for a maximum of three days”. Livi, she limits them to five days, and makes a point of honor not to prolong a stoppage established by a doctor.

Sometimes, some platforms outright advertise it. Like the website Stopmedicine.fr, which offered a work stoppage ” in a few minutes “. If the site was put on notice at the end of 2019, the subject still seems current: in its latest recommendations to the government, health insurance wants work stoppages carried out by teleconsultation, excluding the attending physician, to no longer be reimbursed.

Since the beginning of the year, 7.3 million teleconsultations were billed by health insurance. For 2021, this figure rises to 12 million.

70% of teleconsultations would be carried out by the doctors treating the patients, according to health insurance.

According to Doctolib, 22% of French people are regular users of teleconsultations.

According to a study conducted by Medaviz in 2018, the average duration of a teleconsultation would be 7 minutes.