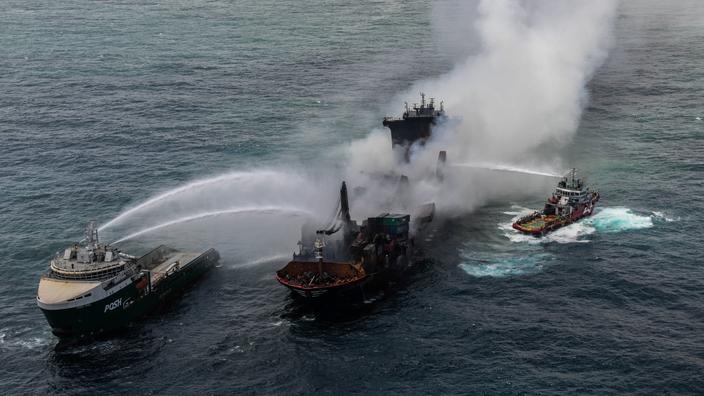 The fire raging aboard the freighter was finally extinguished thanks to an international operation.

The fire aboard a 13-day sinking cargo ship off the capital of Sri Lanka was extinguished on Tuesday thanks to an international operation, said the country’s navy. Although the bulk of the ship’s cargo was destroyed by the fire, some of it was dumped on coastal beaches, causing one of the worst marine pollution in Sri Lanka’s history.

The most serious pollution in the country’s history

The intense fire, contained since Sunday at the rear of the 186-meter vessel, destroyed much of its cargo of 1,500 containers, but eight of them fell in the Indian Ocean. Millions of polyethylene pellets, intended for the packaging industry, escaped and covered Sri Lankan beaches, forcing a ban on fishing in an area of ​​80 km and raising fears of ecological damage. MEPA President Dharshani Lahandapura said ecological damage was still being assessed, but was likely to be “the most serious pollution the country has ever known“. Just yesterday, smoke was rising from the aft section but the vessel was too hot to be approached by then, its operator and officials said.

The authorities decided to sue the owners of the ship and its crew and to claim damages from the insurers. Boat owner X-Press Feeders says the hull is intact and her fuel tanks are not affected, while an oil spill is also feared.

An investigation is underway

To clarify the causes of the fire, a criminal investigation began Monday at midday, with the interrogation of 3 crew members. “We will not speak publicly on the operational details until the investigation is completed” the shipowner said in a statement.

According to the Sri Lanka Marine Environment Protection Authority (MEPA), the ship’s captain noticed a nitric acid leak as early as May 11, long before it entered Sri Lankan waters. Registered in Singapore, the vessel carried 25 tons of nitric acid, plastics, caustic soda, lubricants and other chemicals.

The MV X-Press Pearl, which was only three months old, was en route from the Indian state of Gujarat to Colombo when the fire broke out. He had already passed through Qatar and Dubai and had to go to Malaysia and then to Singapore after the planned stopover in Colombo.