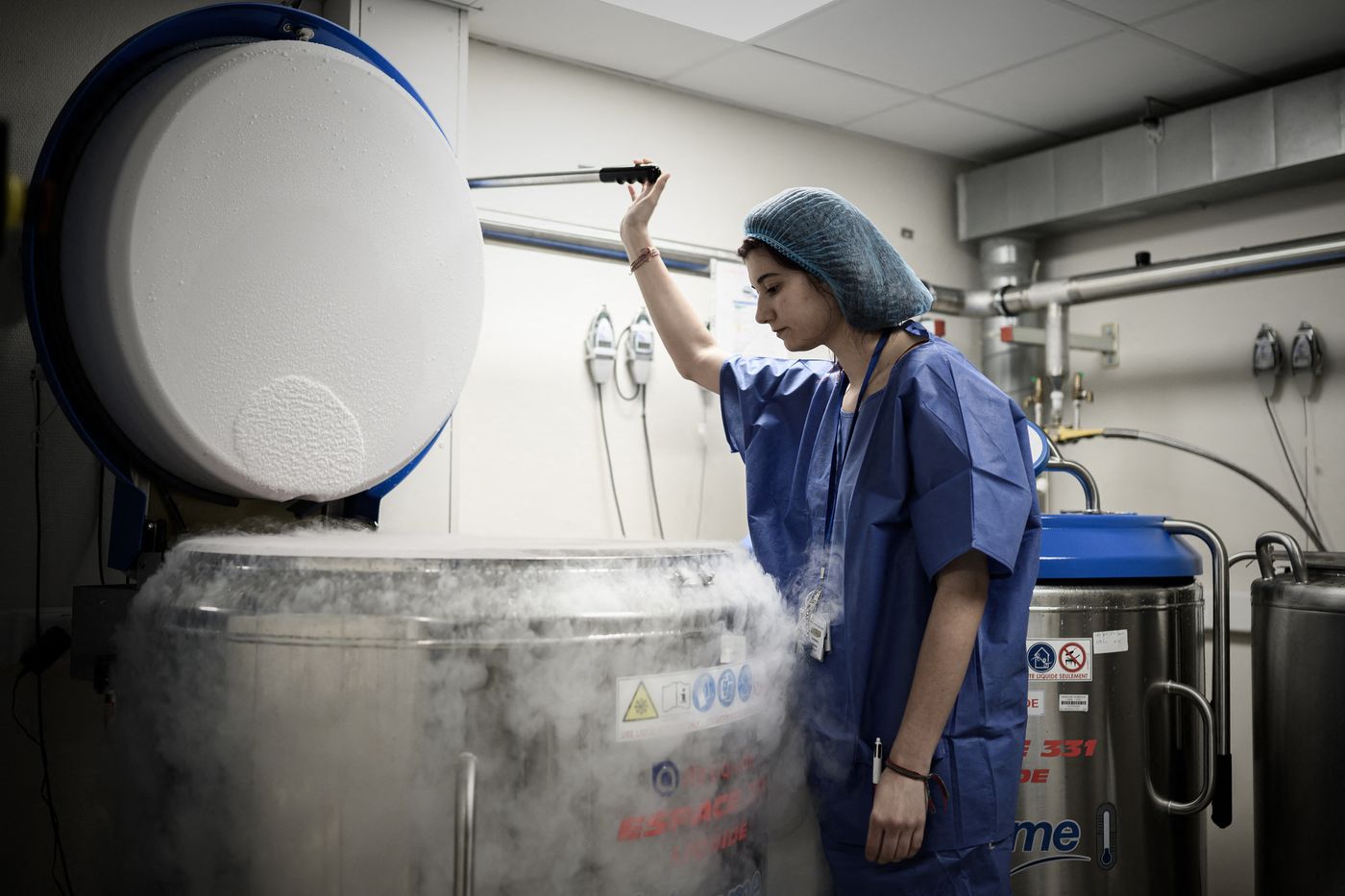 Smiles. Pregnancy tests showing a ” thank you “, close-up. And a call: “Thank you for allowing them to become parents! ” This is the message of the campaign launched this Thursday, October 21 by the Biomedicine Agency to recruit new gamete donors and build up stocks (read below).

→ ANALYSIS. Donation of gametes: no shortage, but delays that are too long

Donate his sperm, Thomas, 42, 3 children, completed the process in 2009. “I wanted to help couples to become parents”, he declares. In the early 2000s, he and his wife struggled to conceive their first child. “Thanks to treatment, we finally managed to have one child, then two, then three. Without recourse to a donor, but not all couples have had our chance. Donating gametes was one way of supporting them. “

A culture of giving

Louis Bujan, professor of medicine and reproductive biology, studied, in 2018, the motivations of gamete donors, male or female. He distinguishes two main profiles. The “concerned”, who have experienced difficulties or seen relatives going through them; and the “Spontaneous”, accustomed to donation “Of their time, of their money” and for whom “Donating gametes is like donating blood”.

→ TO READ. The anonymity of compromised sperm donation

An evidence ? Without a doubt for Jacques, 73, who gave his gametes in 1985 and for whom sperm are only “Biological material”.“We donate blood to help save lives. We donate our sperm to help create a life ”, he says.

Not so easy for Thomas. He too, at the start, put the two gestures on the same level. “But donating your gametes is still more … engaging, he nuances. It’s not just cells, it’s heredity! I never wondered what happened to my blood donations. More than ten years after my sperm donation, I am still in the midst of questioning. Gamete donation is long term. “

The long term is precisely what makes Denis, 33, hesitate: “ I would like to be of service to those who have a desire for children. But it’s not a gift like any other!There is a form of responsibility. The children who are going to be born will have 50% of my genetic heritage, the same blood as my two little boys. It is not neutral. And then, providing gametes, even for a good cause, isn’t it instrumentalizing the body? ”

He thinks, Denis, and allows himself time for reflection.“Any candidate for donations can be counseled for a psychological interview, to ensure their motivation, measure the perimeters of their gesture, underlines Louis Bujan. Since 2016, it is even mandatory for donors who have never procreated. It’s up to us to convey all the information as clearly as possible so that they say to themselves: “I’m going”. Or not “.

→ CHRONICLE. The child of the gift and his origins

Soon, these donation candidates will also have to take into account the lifting of anonymity. This will be imposed from 1er September 2022, on behalf of “Right to access to origins” instituted by the new law. The identity of the donors can be transmitted to any child by making the request. “Some will be anxious at the prospect of being found”, anticipates Jacques. To hear him, however, to encounter the fruit of his gift is ” a gift “ : “We are free from the information we want to give, and also free from relationships that we will or will not establish. “ He knows what he is talking about.

In May 2020, a certain Alexandre, born of his donation, called him: “I fell out of the closet. My daughters too. “ Since then, they consider “Alex” like “Their half-brother”. But Jacques, he refuses to mix genres. “Alexander is a child. Not my child. ” In his eyes, things are clear.

It’s not always the case. ” Not all reunions are going so well ”, tempers Augustin, 56 years old, donor in the years 2000. Last year, a young girl contacted him. “She was very insistent, came to wait for me in front of my office, called me dad. But I already have a family. ” He preferred not to follow up, not without feeling guilty. Reactions “Rare”, according to Alexandre Mercier, president of the PMAnonyme association, which brings together children born from donations. Most children are just looking for the missing piece of their identity. Not parents.

Father ? Donor? Simple parent? Motivations are blurred, sometimes. As with Sylvain, 48 years old. Gave him his sperm in 2018. He would be happy if babies “Had seen the light of day”, thanks to him, whose job“Occupies a lot” and who has “Not taken the time to sit down to build a family”. The donation of gametes is therefore, for him, a way of ” to prolong “. He sometimes talks about his “Descendants”, before resuming: “Children, born of my gift, sorry. “ He hopes for them “Happy and surrounded”.

What if one day the children in question found him? “I don’t think I would oppose it”, he sketches. Every year, it authorizes the Cecos de Bordeaux to keep its samples and has also registered on various platforms used by children born of an assisted reproduction in search of their origins. Via DNA tests, they discover distant relatives, trace genealogical branches… to their donor.

” If they want to find me, they will find me ”, sums up Sylvain, who is wondering, despite everything. For example : “What are the reasons that would push these children to want to know me?” ” The need to know where they come from or the lack of a father? “At the time I donated, assisted reproduction was not yet allowed for female couples or single people. This is now the case. Will the children, who grew up without a paternal presence, have expectations from me? “ This, Sylvain is ultimately not sure to assume. “It would blur the rules of the game”, he points out thoughtfully.

A need for pedagogy

“We are already very careful when we choose donors. With the lifting of anonymity, it will be necessary to show even more pedagogy to explain to them the repercussions of their gesture ”, Louis Bujan analysis. Because there is the momentum of the gift … and the after, he explains. “What will their situation be like in twenty years?” How will their family react? Over time, things can turn out to be more complex than they appear. “

→ ANALYSIS. An infertility plan unveiled by the end of the year

Thomas weighed and weighed this complexity. The new law provides that donors who have already made their donation anonymously to report, by September 2022, if they agree to transmit their identity. He won’t. His wife does not wish it. “The donation was decided as a couple, the decision to lift anonymity must also be. Remaining anonymous does not mean that I am insensitive to the needs of any children born from my donation. I would be perfectly willing to give them, if they found me by themselves, all the information. ”

This decision nevertheless relieves him. “I would be afraid, I think, of developing affection for them. I wouldn’t be sure I could control my feelings. ” Gold, “It would not be good for my wife, nor for my children, nor, above all, for the parents of the child resulting from my donation”, Thomas confides again. Solidarity, but aware that everyone must stay in their place.

The National Institute for Demographic Studies (INED) launches the “AMP without borders” survey to quantify the number of people likely to practice assisted reproduction abroad today in France.

In 2009, according to INED, between 12,000 and 15,000 transnational LDCs were performed each year in Belgium, Spain, Denmark, Slovenia or the Czech Republic (all countries of origin of patients combined).

The French participated strongly in these transnational trips, especially in Belgium. Despite changes in legislation, difficulties in medical care and the organization of ART will continue to give rise to transnational practices, INED predicts.