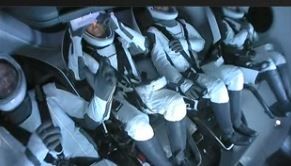 SpaceX’s first four space tourists returned to Earth on Saturday evening, September 18, after spending three days in space, capping the first orbital mission in history with no professional astronaut on board.

The Dragon capsule resisted the vertiginous descent thanks to its heat shield, then was slowed down by four huge parachutes. The landing in the Atlantic Ocean, off the coast of Florida, took place on schedule, 11:06 p.m. GMT (7:06 p.m. local time). “It was a hell of a trip for us, and it’s only just beginning”billionaire Jared Isaacman said shortly after.

A SpaceX ship then retrieved the capsule. The four passengers, smiling from ear to ear, exited one by one. They were then to be transported by helicopter to the Kennedy Space Center, from where they had taken off on Wednesday evening, and where they were to be reunited with their families. “Congratulations, Inspiration4”, tweeted after the landing Elon Musk, the boss of SpaceX, using the official name of the mission.

More than 15 times around the globe every day

The four Americans traveled farther than the International Space Station (ISS), up to 590 km above sea level. Speeding at around 28,000 km / h, they circled the globe more than 15 times each day. The stated goal of the mission was to mark a turning point in the democratization of space, by proving that the cosmos is also accessible to crews who have not been handpicked and trained for years, as are the astronauts. .

Jared Isaacman, 38, boss of a financial services firm, paid SpaceX tens and tens of millions of dollars (the exact price has not been revealed). He had offered three seats to strangers, including Hayley Arceneaux, a 29-year-old medical assistant, who became the youngest American, but also the first person with a prosthesis (femur), to have gone to space. Sian Proctor, a 51-year-old earth science professor, and Chris Sembroski, a 42-year-old US Air Force alumnus, completed the crew.

First sightseeing flight without a professional astronaut for SpaceX / AFP

The flight remained fully automated, but they had been trained to be able to take control when needed. Once up there, they notably collected data (heart rate, sleep, oxygen saturation in the blood, cognitive abilities, etc.) which should allow them to better understand the effect of the spatial environment on beginners. But they also took in the view of the cosmos through a brand new observation dome installed on Dragon, could talk with actor Tom Cruise from their ship, eat pizza or enjoy the joys of weightlessness in music.

The mission also serves as a huge fundraiser for the pediatric hospital of St Jude (Memphis, Tennessee), where Hayley Arceneaux works after being treated there as a child of cancer. In the vessel were various objects (ukulele…) which must now be auctioned for the benefit of the hospital. About $ 160 million has been raised so far, including $ 100 million donated by Jared Isaacman.