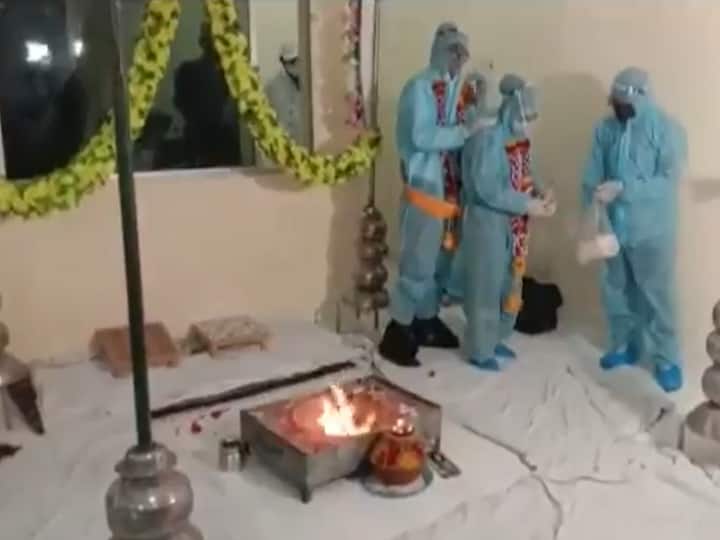 Some interesting scenes are also being seen in the creepy scene of Corona, which is seen everywhere. One such picture has emerged from Ratlam district of Madhya Pradesh. After the groom came to Corona positive, the couple were wearing seven PPE kits. Selected people were also present in PPE suits with complete corona protocol. When this marriage was fixed, the bride and groom were perfectly healthy, but on April 19, the groom’s Kovid report came back positive. The groom was isolated in the house. Meanwhile, the wedding date also arrived. The administration did not allow the wedding ceremony. Administration officials also reached to stop the marriage. But after the intervention and guidance of senior officials, the middle path was found out. The bride and groom took seven rounds wearing a PPE kit.

A unique initiative of the police in Bhind, police will feast on marriage between less than 10 people

Similarly people should be aware of the awareness and precaution regarding corona Efforts are being made for many ways. Superintendent of Police, Bhind district of Madhya Pradesh, Manoj Kumar Singh has announced that if Corona follows the guidelines and conducts marriage ceremonies among 10 or less people, then SP Sahab will provide them with delicious food. Not only this, the work of bringing them back and leaving them will also be done by the government vehicle.

Chhota Rajan was admitted to AIIMS Delhi, seen symptoms of corona infection in the last days