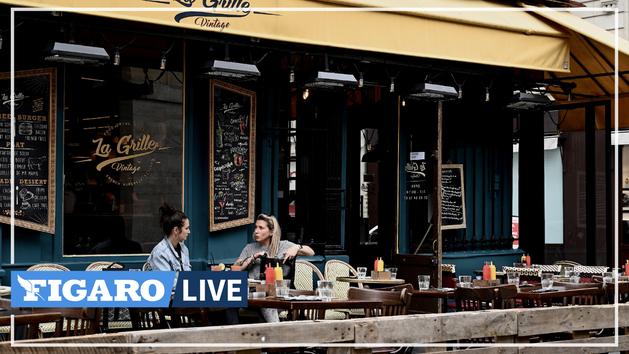 In Paris and its inner suburbs (75, 92, 93 and 94), Lyon or even Toulouse, the epidemic indicators are in the red and the metropolises have crossed the “maximum alert” threshold since Sunday evening.

Matignon’s announcement sounded the coup de grace for the bars located in these areas. These establishments will simply have to close on Tuesday, while the restaurants will be able to remain open by respecting a new reinforced health protocol. Frank Delvau, the president of the Union des trades et des industries de l’hôtellerie (Umih) Paris Île-de-France, said to himself “extremely alarmed for bars that are going to be closed for two weeks“. If the representatives of the profession have “Welcomed the government’s decision to leave open the restaurants and all establishments providing a sit-down catering activity”, they have indeed denounced “Strongly that the closure of all bars has been imposed by the public authorities, reducing their definition to a main activity consisting of the sale of alcoholic beverages”. According to them, “The notion of bars covers very different realities” and the profession regrets that the government has not accepted the proposed criterion: to keep open any establishment that can “To seat its customers at tables and to respect the sanitary protocol applicable to restaurants”.

Why are bars forced to close and cannot be subject to a reinforced protocol? In the first place, the executive considers these spaces as important places of contamination. According to an American study published last September, cited on several occasions by members of the government, infected people are 2.8 times more likely to have gone to a restaurant, and 3.9 times more likely to a bar.

In France, Public Health France had counted last week about fifty clusters in bars and restaurants.

»SEE ALSO – Sanitary measures in Paris: “All bars must be closed»From October 6

Blurred distinction between bars and restaurants

During a press conference this Monday morning, the prefect of police Didier Lallement, the prefect of the Île-de-France region Marc Guillaume, the director general of the Regional Health Agency Aurélien Rousseau and the mayor of Paris Anne Hidalgo have confirmed the “restrictive braking measuresWhich concern bars and restaurants, the duration of 15 days for Paris and its three neighboring departments, as well as the closure of bars.

But how do you distinguish a bar from a restaurant? Often the limit is fine for bars that also offer catering. According to the Prefecture of Police, a bar is defined as a “establishment that primarily sells alcoholic beverages“, And restaurants like”establishments that sell meals primarily, alcohol can only be served with a meal“. The former will thus have to close their doors while the latter will be able to continue serving alcoholic beverages, provided they accompany a meal.

The notion of “as a principalRemains unclear. The Umih met this afternoon with the Paris police headquarters in order to clarify its outlines. There will no longer be any question of distinguishing between establishments according to the license they have. “The prefecture understood that an establishment that has an IV license can also offer food. It’s a first victory», Explains Frank Delvau.

Bars validating the criteria allowing them to remain open must operate exclusively for table service, and without time limit, on the same model as restaurants. The bars-breweries, which offer “a very complete menu“, Can thus remain open,”but will have to close the counter, where drinks are usually served exclusively“.

Frank Delvau also specifies that the bars which only offer tapas, crisps, cold cuts and cheese boards, will for their part have to close on Tuesday. “A plate of fries for two won’t be enough», He specifies. A slight vagueness nevertheless remains around the bars offering salads or croque-monsieur. “There will be no question of evaluating the distribution of the establishment’s turnover. Police officers are not tax officers. It will be a matter of common sense and balance», Explains the Umih.

The terms of the new health protocol must be specified this Monday evening.

The prefecture’s controls may still prove to be delicate in the coming days, because it remains complex for some establishments to assess the legitimacy of remaining open. The police will check if an establishment has “a well-equipped kitchen and if people are at the table for a meal», Explains the president of Umih Île-de-France. In fact, the controls will mainly focus on the quantity of drinks and food visible on the tables.s.

In theory, some establishments in the capital could therefore expand their card to remain open. But for cocktail bars, themed bars and other specialized establishments, it will be more difficult to reinvent yourself. “They won’t go into the restaurant business overnight. You don’t become a restaurateur by getting up one morning, you need a team, equipment and know-how», Specifies Frank Delvau.

Moreover, there is still some uncertainty around the consumption of drinks in café-brasseries at times that do not correspond to lunch and dinner.

Bar controls that have heightened fears of contamination

Since last week, bars have been trying to negotiate to keep their entire establishment open, by applying the same tight sanitary protocol as restaurants. “This has so far been denied to us. The authorities fear that it will be more difficult for bars to respect it. They have seen people standing with glasses in hand in some establishments in recent days and have become afraid», Explains Frank Delvau. In a bar, music is usually present, people have to speak louder and closer to their neighbors, which increases the risk of spraying potentially contaminated droplets. The executive thus judged that the barrier gestures were more difficult to respect.

Last weekend in particular, the checks carried out by the prefecture in establishments in the capital increased. “There have been some scandalous situations this weekend. Brewery bosses were ordered to close after checks Friday night around 10:30 p.m., while customers were still having dinner», Affirms for his part the President of the Union.

Controls should be stepped up from Tuesday, to verify that bars and restaurants comply with the new measures. Professionals in the sector now demand a “emergency financial plan for establishments that cannot recover from this new 15-day closure“.