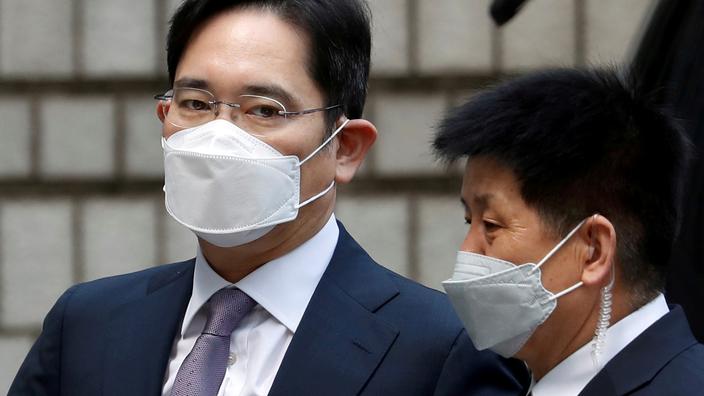 Already imprisoned in a corruption scandal, Lee Jae-yong is being prosecuted for price manipulation and breach of trust in particular, with the aim of ensuring control of the group led by his father.

Samsung heir and de facto boss Lee Jae-yong, imprisoned in a corruption scandal, appeared Thursday, April 22 in Seoul at the opening of his trial in another case, that of the controversial merger of two subsidiaries that had favored its takeover of the conglomerate.

Samsung, one of the world’s leading smartphone and chip makers, is by far the largest of the “chaebols,” the family-run industrial empires that dominate business in South Korea, the Globe’s 12th largest economy. These family dynasties often have only a small direct stake in their conglomerate, which they however control through complex financial arrangements of cross-shareholdings in their subsidiaries.

On paper, Lee Jae-yong, who is the grandson of the founder of the conglomerate, is the vice president of the group’s flagship, Samsung Electronics. He was dismissed for price manipulation and breach of trust, among other things, in connection with the operation which in 2015 allowed Cheil Industries, a subsidiary specializing in fashion, food and leisure, to take control of Samsung C&T (BTP) for eight billion dollars.

A court spokesperson confirmed to AFP that Lee Jae-yong was present at the hearing. He was the largest shareholder in Cheil Industries and Samsung is believed to have artificially undervalued C&T to give the heir a larger stake in the merged entity. This had allowed him to consolidate his control in view of his smooth succession at the head of a group which was still led by his father Lee Kun-hee, who finally died last year. Lee Jae-yong’s lawyers have always argued in the past that everything he did in connection with the merger was legal.

Lee Jae-yong is currently serving a two-and-a-half-year prison sentence for corruption and embezzlement in the shocking scandal that led to the impeachment and subsequent incarceration of former South Korean President Park Geun-hye. Creator of the global take-off of Samsung, his father Lee Kun-hee bequeathed upon his death in October to his heirs an immense fortune, but also an inheritance tax in the order of 13 trillion won (9.7 billion won). euros), the first installment of which must be paid at the end of the month.

Read also :How Samsung adapts its smartphones to telecommuting

Samsung plays a crucial role in the South Korean economy because of its weight. “What is the most problematic”, however, observes Vladimir Tikhonov, professor of Korean studies at the University of Oslo, “It is the attempt to perpetuate without any form of dispute a dynastic rule over a company which is responsible for 20% of South Korean GDP”. “The main players in Samsung are its shareholders, including smaller ones, its employees and South Korean society as a whole”, he told AFP. “It’s too big to be dynastic property.”