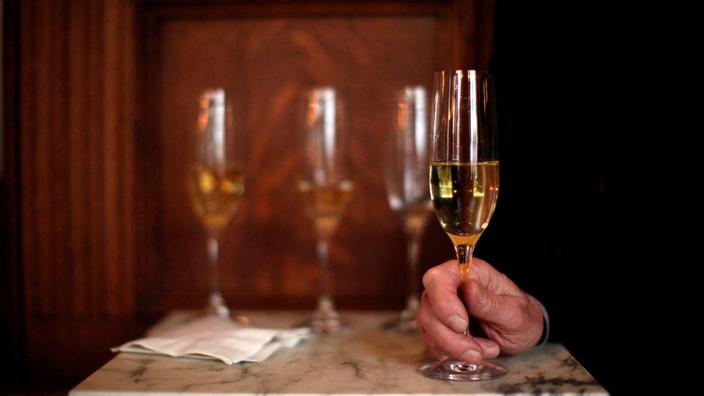 The world of champagne has had to resign itself to respecting the new Russian requirements: from January 1, the famous French appellation will no longer be able to use its own name in the Cyrillic alphabet on the back labels of its bottles sold in Russia.

However, discussions between France and Russia on this subject are continuing, Paris hoping to eventually convince Moscow to recognize the appellation of origin.

Read alsoFlute, cup … Are you sure you are drinking your champagne from the right glass?

Since July 2, a modification of the Russian law on the trade of alcoholic products obliges the distributors of champagne to exchange the prestigious title of “champagne” for that of “sparkling wine” on the back-label of the bottles written in Cyrillic, reserving the name in Cyrillic “ChampanskoyeTo Russian sparkling wine producers.

This provision had aroused strong indignation this summer among producers and distributors of champagne, taken aback by this sudden measure and anxious to protect their designation of origin. Several French ministers strongly protested.

Paris had finally obtained from Moscow, at the end of October, a two-month moratorium on the application of the new Russian rules, in particular in order to dispose of their stocks already labeled and sometimes already shipped.

This moratorium on controls “played its role“, The Champagne Committee told AFP. “It gave Champagne companies time to adapt and change their labeling to comply with the new Russian regulations.», Emphasizes this inter-professional committee, which brings together the winegrowers and merchants of the appellation.

“It ensured that goods which had been sent before July and which did not comply with the new regulations were going to be able to be sold and consumed.Before the agencies in charge of control began their inspections, according to the same source.

As of July 4, Moët Hennessy (LVMH group) announced its intention to comply with the new legislation in force, by making adjustments to its labels as soon as possible.

However, the people of Champagne fully intend to continue their long-term fight on the recognition by Russia of their appellation of origin and the defense of the name Champagne, with the support of the French government.

At a meeting of the Franco-Russian Economic, Financial, Industrial and Commercial Council (Cefic) last week, France and Russia “agreed to continue discussing in the coming months the new Russian legislation of 2 July and the issue of labeling“, Declared to AFP the entourage of the Minister for Foreign Trade Franck Riester.

“We remain mobilized, in conjunction with the European Commission, to continue to move forward on this file and defend our wines and spirits sector, in particular champagne.», We add to the ministry.

For their part, champagne professionals traveled to Russia in November to meet Russian producers. These latter “are developing their own sectors of excellence in wine», Declared to AFP Maxime Toubart, president of the General Syndicate of Winegrowers of Champagne, who took part in the trip.

“This move upmarket serves us», Estimates Maxime Toubart, who is also co-president of the Champagne Committee. He hopes that “medium term“, Russian producers will eventually abandon the name”ChampanskoyeTo create their own appellations.

Overall, I think Russia could share with us the importance of appellations of origin, so I’m quite optimistic for the future.

The United States and Russia “are the last two main countries where the designation of origin champagne is not fully protected», Notes the Champagne Committee.

“Overall, I think Russia could share with us the importance of appellations of origin, so I’m quite optimistic for the future.», Declared Franck Riester during a trip to Washington in mid-November.

Russia is the fifteenth champagne export market with 1.8 million bottles sold in 2019, which represents 1.5% of total champagne sales, according to the Champagne Committee. Corn “it is a promising and rewarding market. Russian consumers love great cuvées and they also taste champagne on their travels.In France, he emphasizes.

SEE ALSO – Talk Décideurs • Krug: “Our champagne is a melody of 180 musicians”