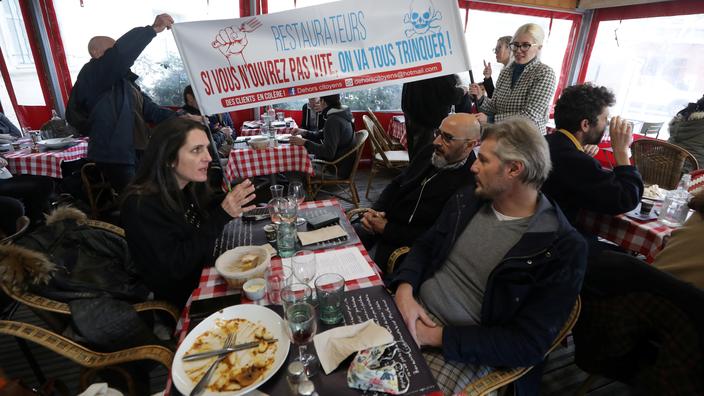 The government is determined to dissuade restaurateurs who seek to open despite the health restrictions. In a decree published on February 17, the Ministry of Justice established new, more severe penalties for restaurateurs but also for customers who choose to break the law.

Read also :“It’s just for friends”: diving into the world of illegal restaurants

Concretely, an establishment open to the public – and therefore not only restaurants, notes the Banque des Territoires – which violates the ban imposed in the context of the health crisis will be punished with a fifth class fine, and this from the first violation. . The fifth class is the highest category of sanction in French criminal law. The fixed fine – that is to say the fine that can be pronounced directly by a police officer or a gendarme – will now be 500 euros. In the event of non-payment within the allotted time, this fine is increased and reaches 1000 euros, specifies the decree. Previously, the flat-rate fine was set at 200 euros, and the fine increased to 450 euros: these amounts have therefore more than doubled.

Customers who decide to go to these restaurants illegally will also be sanctioned. The decree explicitly provides that they will receive a fourth class fine, corresponding to a fine of 135 euros. This amount already applies to people who violate the 6 p.m. curfew.

On February 1, restaurateurs angry at the forced closure of their establishments called for their rooms to be opened to customers, in the wake of the punching action of the owner of the restaurant Poppies (Nice) who had welcomed customers despite the ‘prohibition. The hopes of these restaurateurs had been showered on the very morning of February 1. The Minister of the Economy, Bruno Le Maire, had announced a first warning shot: “those who choose not to respect the rule will be suspended for one month from access to the solidarity fund“.

The restaurateurs who planned to open that day therefore finally fell back on take-out to avoid losing precious aids. The solidarity fund consists of either a flat-rate aid corresponding to the amount of the loss of turnover or a compensation to the author of 20% of the turnover for the year 2019. This fund is in addition to three other forms of assistance: 100% support for partial activity by the State, the system of exemption and assistance for the payment of social charges, and the deferred accounting depreciation of property.

So much aid that has been extended at the start of 2021 since no date for reopening restaurants and bars has been announced to date by the government. This week, 65 senators, mainly from the center and the right, wrote to the President of the Republic to demand the resumption of their activity at noon, and to allow them to carry out take-out after 6 p.m. – currently, only the delivery is possible after the curfew. “The French unfortunately understood that the end of the crisis would not be immediate, but the closure cannot be the only horizon for these tens of thousands of establishments.», Conclude these senators.

To see also – Restaurants, cinemas, swimming pools: Karl Olive pleads for management of “inflows and outflows” by mayors and prefects