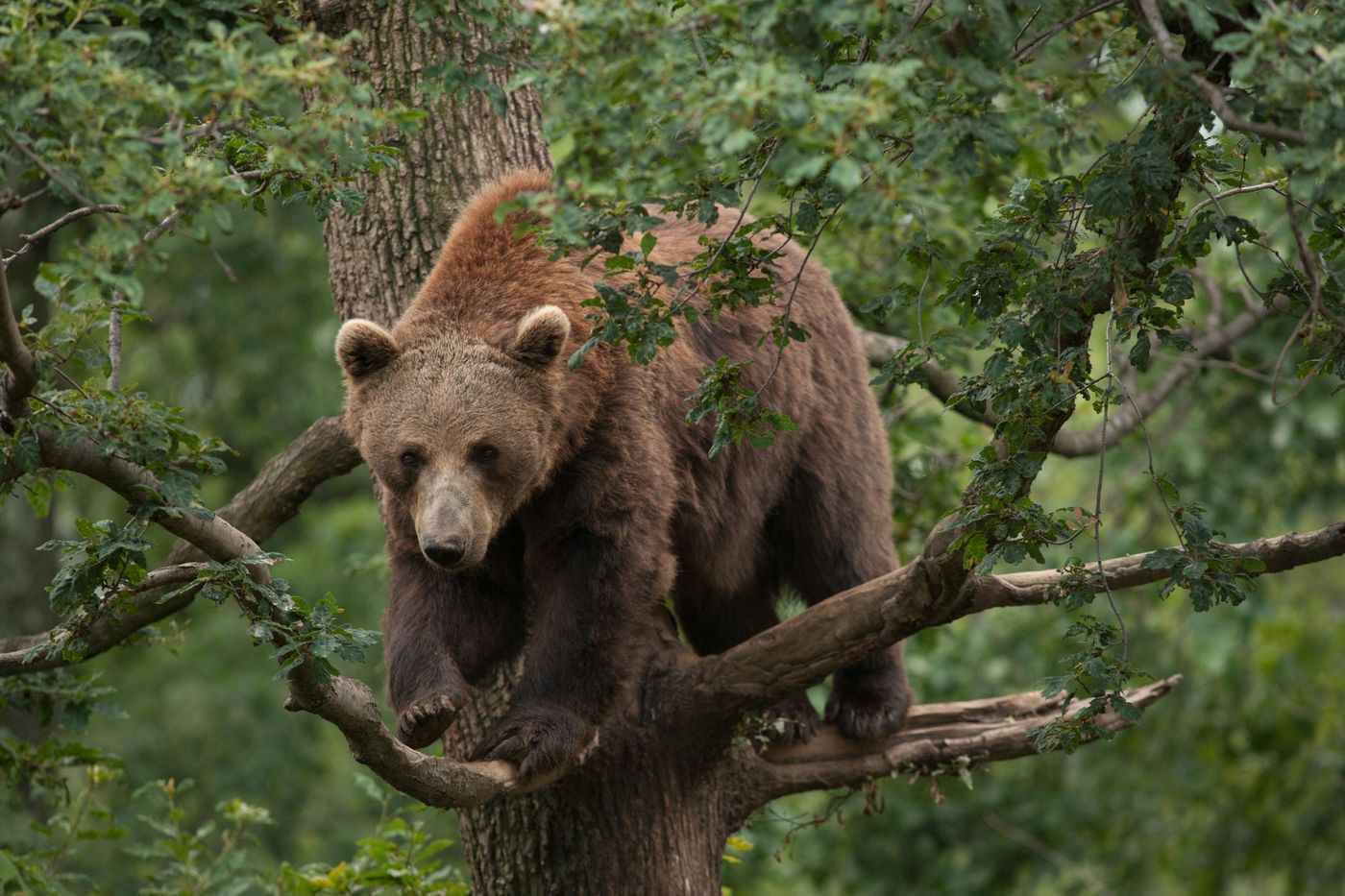 The horizon is drowned on the peaks of the Carpathians. Walled in her trauma, an old bear turns tirelessly on herself, unable to enjoy this wild landscape which is, from time immemorial, the lair of her species, Ursus arctos.

→ READ. The bear, an endearing animal with an uncertain future

“We have bears going around in circles for months and months, they stay locked in their virtual cage”, saddens Cristina Lapis, president of the Millions of Friends association and founder, in 2005, of the Libearty Bear Sanctuary, the largest reserve of brown bears in the world, supported by the British Association for the World Protection of Animals. In this vast wooded area of ​​69 hectares, ceded by the neighboring municipality of Zarnesti, in Transylvania, 160 kilometers north of Bucharest, 117 bears, shattered by their years of captivity, are learning again to live and move in semi-freedom.

Among the former residents, Mary and Vasilica were uprooted from a cage outside a gas station where customers, for a fee, took pictures of them. Old Martinica has languished for twenty years in another cage inside the courtyard of a monastery. The bear Samy was to attract the barge in front of a three-star hotel …

Maya, she self-harmed in her cage before she could be transferred. “She devoured one of her legs, then the other, she died in my arms”, is moved Cristina Lapis who wanted to help her and dedicated the sanctuary to her. “For sixteen years, we have been fighting to confiscate these illegally detained bears, with the help of the National Environmental Guard. It was a real struggle with the owners of restaurants, factories and businesses who displayed a bear as a mascot ”, she continues.

To his knowledge, there are still three bears to be recovered: two from a breeding farm, which sold the cubs dearly, and the last, captive of a five-star pension at a ski resort.

Circuses and zoos that don’t want to keep them

Bears from circuses and zoos also flock to the sanctuary. Subjected to punitive deprivation, because she had ended up refusing to dance and pedal a bicycle, Mura arrived hungry, in 2006. After a fire which decimated the animals of the same circus in 2017, Romania forbids wild animals in circuses.

“Zoos promote reproduction, believing that having young attracts the public, but when they have too much animal density, they no longer want to keep the old ones, laments Cristina Lapis. This problem arises in many countries. “

As a result, the fame of the sanctuary goes beyond borders. Bears from Ukraine, Armenia, Georgia, Albania and even Texas have been collected. “We recently had a request from Azerbaijan”, underlines the association manager.

All are polytrauma victims. “They have been mistreated, by tradition, cruelty, or ignorance”, indignant Paula Ciotlos, vice-president of Millions of friends. She points to two tiny cages placed near the sanctuary in which two bears from a Ukrainian circus will have lived for more than twenty years. “They all arrive very badly, she specifies. Some people were made to drink beer, and they hurt themselves with broken bottles, their teeth were damaged from gnawing at the bars, their stomachs broken from having been too little and too malnourished; the bear Max is become blind to have had the eyes pricked by a needle so that it supports the flashes of the cameras. “

“Here, it is a place of rescue, there is no birth”

After a phase of care and quarantine, the plantigrades are gradually transferred to increasingly large enclosures, up to the larger ones which extend from fifteen to thirty hectares. “These spaces are far too small for solitary bears who are used to living in the natural environment, but they are immense for these animals which have only known one cage, adds Paula Ciotlos. Here, it is a place of rescue for mistreated animals, there is no birth, all the males are sterilized. “

Wild bears are also brought to the sanctuary. Cubs abandoned after the death of their mother, such as 10-month-old Mia brought in by a ranger in 2011. Bear Ciere was captured after she frightened locals by wandering around the town of Ploiesti in 2015. This was also the case for Epizon, accompanied by her children, who had robbed houses of a mountain resort in 2017.

“Last November, we were called at 1 am for a bear and her two cubs walking through the streets of Brasov. The ministry tells us: “You take them or we kill them.” So we take them, even if I am against the fact that we take away their freedom ”, reports Cristina Lapis. They are now 25 wild bears at the sanctuary. “We told the guards, they are the last we can take in, we no longer know what to do, admits Paula Ciotlos. They need a lot of space and you can’t mix them up. “

It is that the brown bear, classified “Critically endangered” in France, is doing well in Romania. According to a debatable estimate, there were 6,000 in 2016. 300 to 550 bears were hunted there per year – despite the protection of the plantigrade since Romania’s entry into the European Union (EU) in 2007. An extremely lucrative business, which attracted celebrities from around the world until the ban on trophy hunting in 2016.

The Ministry of the Environment then granted sampling quotas (140 in 2019) before restricting shots to authorizations on a case-by-case basis for problem bears. Not without slippages, as revealed by a waiver granted in May 2021 to a prince of Liechtenstein, who killed a particularly imposing male.

“The bears have become too numerous, there are too many emotions, hunting made it possible to regulate populations”, argues Petru Stancioiu, professor of general and forest ecology at the University of Transylvania, Brasov. Last spring, Environment Minister Barna Tanczos blasted the fact that 17 European countries approached had refused to take in bears, forcing Romania to take charge of the vast majority of the EU’s urinary population.

“Feeding the bears was the biggest mistake”

According to Petru Stancioiu, in just fifteen years, the behavior of bears has changed. “It was very rare before to meet one, we only saw their traces. Now they come to the fields, villages and towns, even in broad daylight. They attack the trash cans, make the slightest effort to find food. They are no longer afraid of men, firecrackers and gunshots, but men are more and more afraid ”, he worries. Last year two people were killed. However, he argues, for a happy coexistence to be perpetuated, the bear must stay away from humans.

→ IN FRANCE. A new era for captive wildlife

For years, to get to see them, bears were drawn to food deposited near observation posts. “Now, we feed them in the forest to keep them at a distance”, specifies Petru Stancioiu. Maintained, in town and in the forest, and taking advantage of milder winters, bears no longer hibernate, and females frequently have three young. “Feeding the bears was the biggest mistake”, storm Cristina Lapis. “Bears have been force-fed, including with cookies or chocolate, by forest services and hunting associations to attract them. Hunting brought in a lot of money. Now that they don’t have as much money, and that they can no longer hunt, they are no longer so interested in keeping and feeding them ”, she denounces.

Bogdan Costescu, ranger and hunter, surveys the forest near the Rasnov observation post. But at the dawn of winter, the bear refuses to point its nose. He doesn’t have words harsh enough for them “Living room ecologists”. But he agrees with them on two points: “Hunters have exaggerated the number of bears to have higher hunting quotas. As for the inhabitants authorized to take berries and mushrooms for their personal consumption, they completely comb the forest; they sell their harvest and leave nothing to eat for the bears. “ According to Cristina Lapis, with 260,000 tonnes per year, Romania is the biggest exporter of forest fruits and mushrooms.

According to her, everything remains to be done to allow cohabitation: put the bins in closed enclosures, protect farms and villas built in the forest with fences, no longer rob the forest, and even plant fruit trees and corn on the edge for the bear meals. “But since the cubs have learned to feed themselves in the garbage, change will be difficult”, she recognizes. And if it was necessary to reduce the population, rather than hunting, she suggests chemical castration of males via food.

For the moment, the question of the real number of plantigrades tears pro and anti-bear. A scientific study to assess the population, using DNA taken from collected droppings and hairs, funded to the tune of eleven million euros by the EU, should shed light on this thorny debate next spring.

A protected species in Europe

At the World level, on the red list of threatened species, the brown bear, Ursus arctos, is classified in the category “Minor concern”. There are approximately 110,000 bears on the planet, the vast majority in Canada, Alaska and Russia.

In Western Europe, they would be around 15,000, mainly in the Carpathians, the Balkans and Sweden. Residual populations, which number in tens of individuals, persist in France, Spain, Italy or Norway.

In France, their number is increasing. But with around 70 individuals, the species remains “Critically endangered”. Prefect Jean-Yves Chiaro, appointed at the end of November, is responsible for mediating between pro and anti-bears and for drawing up a new European Life Ours plan, for preservation and coexistence, after the latter has been adjourned in September.