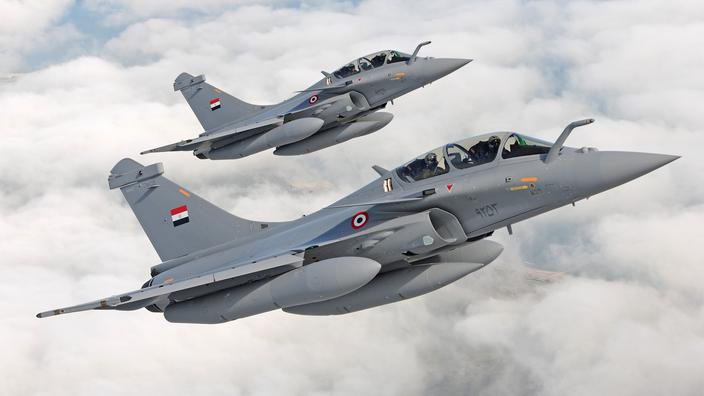 The payment of the first installment enables the second order of French combat aircraft, announced in May 2021 by Cairo, to materialize.

Six months after being made public, Egypt’s second Rafale order has materialized. “The contract for the acquisition by Egypt of 30 additional Rafale to equip its Air Force has entered into force», Announced this Monday, Dassault Aviation *, the manufacturer of the French combat aircraft. On May 4, Cairo decided to complete its first acquisition of 24 Rafale, signed in 2015. Egypt was indeed the first country to choose the Rafale to modernize its air force.

In total, therefore, 54 Rafales will be operational within the Egyptian Air Force. This will make this fleet the second in the world, after that of the French armies. “ In a demanding geopolitical context, Egypt has chosen the Rafale to ensure, in full sovereignty, its role as a key player in the regional and international arena. It is an honor for Dassault Aviation as well as for its partners who are fully mobilized to meet the expectations of the Egyptian authorities. », Says Eric Trappier, CEO of Dassault Aviation.

This second contract, “worth around 4 billion euros with armament and services, according to the Hôtel de Brienne is part of the continuity of the privileged relationship that the two countries have built and then strengthened in recent years. Paris and Cairo share a common analysis with regard to the fight against terrorism and the maintenance of stability in the regions of southern Europe and of security in the Mediterranean.

“ Egypt is the keystone of preserving our interests in Europe’s security and supply (in oil, Editor’s note) with 20,000 boats, which pass through the Suez Canal every year », We explained, last May, to the cabinet of Florence Parly, the Minister of the Armed Forces. “Egypt offers us support points in the Red Sea with the Berigat air base and overflight authorizations, as part of the fight against terrorism. “
Cairo and Paris share the same vision on respecting the integrity of territorial waters, in particular in the eastern Mediterranean, which Turkey has contested in recent months.

Read alsoThanks to the Rafale, Dassault’s activity is recovering strongly

This new contract “strengthens the historical ties forged with Dassault Aviation for nearly fifty years. He
also testifies to the satisfaction of the Egyptian authorities as for the good progress of the execution of the first contract. Finally, it confirms technological and operational excellence
Rafale and its export success», Explains the manufacturer.

The first deliveries of the 30 Rafales could take place as early as 2024 (three years are indeed necessary to manufacture a Rafale, after the entry into force of the contract).

* The Dassault group owns the Figaro.