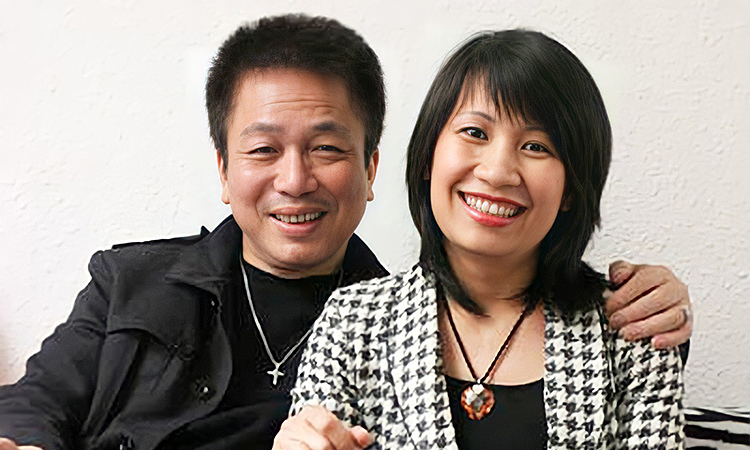 Phu Quang once gave his wife the song he popularized poetry Doan Thanh Tung: “I rushed to suddenly stir fallen leaves / Remove the cold loneliness on the porch”.

In Phu Quang’s career of composing more than 600 songs, the love song segment accounts for a large number. The pink shadows in Phu Quang’s music sometimes appear in the lyrics and melodies, becoming vivid visualizations. Also, sometimes, they are just a stream of vague memories that he has saved and preserved over the decades.

The Unspeakable – one of his first compositions – was born when he was in his twenties, first feeling the primal vibrations of falling in love. Phu Quang once said that when he was a poor student, he and his friends only got two servings of boiled flour bread every day. One day, he received an extra piece of cake, which was silently given by a young woman. His first love continued to grow, but at the age of focusing on his career, he did not dare to go far. The musician represses concern in each verse:

“A tender word of love
It’s something I can’t tell you
Afternoon clouds melancholy stopped at the back of the hill bewildered
On the road away from the countryside, I picked you up, a land of our own…”.

When Phu Quang left Hanoi and moved to Ho Chi Minh City in the mid-1980s, another shadow also became a source of poetic inspiration for him. That day, he had a beautiful love affair with the beauty queen of a high school. The perfect girl from appearance to soul, pursued by many boys, but Phu Quang is her chosen one. Initially, their love story was forbidden by the girl’s relatives because of regional differences. Gradually, her family accepted it because they appreciated his kindness and gentleness. Later, her family moved to the US to settle down, intending to take him with her, but the musician said that she could not leave Vietnam. They parted sadly.

After she left, in a lonely mood, he poured his mind into a bunch of songs 13 ordinary things, in which the most famous is song number 3 – Not by autumn (Giang Van’s poem). “At that time, I received a letter from her, saying that she regretted leaving me, feeling guilty. I also wrote back a letter saying that, in the middle of our story, no No one is at fault, advise her not to worry and do anything. Just like falling leaves a lot, it’s not because of autumn. It’s just a matter of fate,” he once said.

13 years after breaking up, she got on a flower car. He wrote The ultimate normal, closing a bunch of songs, is also a way to close a love affair for a while. The lyrics in the torment were somewhat calm: “There are times when I go to the street / The street is too crowded to see people / Suddenly I see myself smiling like a naive stone / One morning I see myself in the mirror, my hair is fuzzy like dew…”.

With the song Autumn hides you (popular poem Doan Thanh Tung), he dedicated her to Trinh Anh Thu – his later wife, 20 years younger than him. The two came together when he was already on the other side of life, but the song was still full of love: “Did autumn hide you for so long / At the end of the road I recognized you / You rushed to me suddenly Falling leaves / Remove the cold loneliness on the porch…”. During his lifetime, Phu Quang used to joke that his wife could withstand the humidity of a musician. She worked in the banking industry and was a fan of his works. The two gradually fell in love with each other because of the common passion for music and painting and a simple lifestyle. Their home in Tay Ho (Hanoi) is a space in harmony with nature, with a sunlit skylight, fish tank, garden and many paintings and statues of many schools.

The pink shadows in the love song Phu Quang are sometimes just fleeting images he encounters in daily life. The simple thing was born in such a moment. At that time, he was asked to write a song for a movie. Wondering how to write, he was shown the image of artist Le Khanh walking through the eucalyptus forest in Vinh Phuc – the sun drops through the eucalyptus canopy dancing on her sister. He came up with the sentence: “Tenderly, the sun’s rays play lightly on the shirt”. Looking at Le Khanh’s holy face when he looked up at the sky, he continued: “Your lips call for longing, your eyes are wide, gazing at the sky”. “But between me and Khanh, there is no such thing as love. I have hundreds of songs, each song associated with one girl makes me thinner than Do Trung Quan”, he joked when asked about his inspiration for songwriting. .

Among many female vocalists who used to sing Phu Quang’s music, Khanh Ly was given the song by him Will be alone (Poetry of Hong Thanh Quang). The song was released in 2017, at that time he wrote to satisfy the loneliness in his mind, not thinking about giving it to any singer. By chance, I heard Khanh Ly’s voice echoing in the tape Son La 7, he realized more than anyone else, she was the most suitable person for this love song: “Alone, I will be alone/ Find an old song to sing and play alone/ I’ll be alone/ When I’m sad, I’ll sing sad lyrics far…”.

From America, Khanh Ly told VnExpress She received news that Phu Quang had died on a very cold day. The singer remembers the moment she once shed tears when she saw him sitting alone at the piano, in the middle of a smoky light, thin and thin, with his head down, eyes closed and hands hovering over the keys.

“It was the person who breathed the soul into the beautiful and sad poems, merged with the soul of Hanoi, making Hanoi suddenly feel more poetic, more beautiful, warmer, more lovely. That familiar figure made me feel better. I feel pain thinking about the old people who have passed away. I wandered alone, suddenly thinking about it. Why are such lovely people, who have given this life so many warm consolation, who have given this life. gave her beautiful and kind heart, but had to leave again …”, she said.