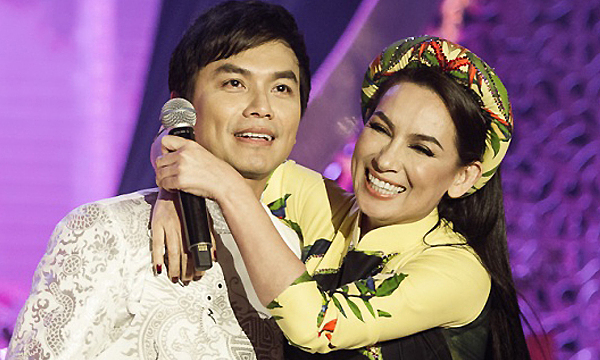 Singer Phi Nhung, who once joked about getting old, will push Manh Quynh to sit in a wheelchair, go around singing to serve the audience.

On October 1, from Washington, USA, Manh Quynh paid tribute to Phi Nhung – his close colleague. He said there were no more tears to cry when the two unfinished their promise to sing together for the rest of their lives. As a farewell, he wrote a poem for the “music lover”: “Remembering the childhood when we had a couple / Having fun and joking around without worrying / The stage is where we weave dreams / The voice of the promise to give each other / Then the old age passed / Happy and sad memories have not faded / Twenty years, even love is still beautiful…”.

“Spring time” Manh Quynh mentioned was the time in the late 1990s, when both had just entered the overseas music industry. In an interview, Manh Quynh recalled that when he first met, he was impressed with Phi Nhung’s voice: the characteristic husky timbre, the natural way like everyday speech. Above all, he is in tune with Phi Nhung in childhood without family affection since childhood. They also experienced many hardships of living when they first came to America, before coming to the singing career. Manh Quynh once said that the similar starting point is the reason why he and Phi Nhung became soulmates on stage.

Before Phi Nhung – Manh Quynh, many duets have shaped their names and styles, attracting a large audience of tunes such as Giao Linh – Tuan Vu, Nhu Quynh – Manh Dinh… However, the combination of The two artists still create a new wind, especially in the lyrical – folk music genre. They made their first appearance through the show Even though you are poor (To Thanh Tung) in 1999. Phi Nhung wore a white ao dai, and Manh Quynh played the role of lovers who overcame fate to come together: “A love sentence, please praise for a lifetime / We are still together / Rich and poor / As long as we don’t dependent on each other …”. The romantic but close, popular performance of the two helped the video create a fever, bringing them into the ranks of the most popular vocalists in the overseas music industry at that time.

The couple Phi Nhung – Manh Quynh also contributed to the trend of singing neo-classical music in the early 2000s. In the song Purple house (Hoai Linh, Loan Thao), Manh Quynh’s melancholy singing style, combined with Phi Nhung’s lyrical, high-pitched voice attracts the audience in both the new and ancient music. The performance was a success, opening another series of duet songs in the same genre, such as The end of love (Tu Nhi, Manh Quynh, Loan Thao), Ly bird Quyen (Written by Chung, Loan Thao)… Manh Quynh also wrote the ancient lyrics “do ni making shoes” for both, for example, Welcoming this spring, remembering the old spring (America), If we’re far away (Tu Nhi)… Artist Bach Tuyet commented that, despite not being properly trained in the field of cai luong, Phi Nhung’s way of up and down her voice when singing echoes is still fluent and in tune thanks to many years of training.

For more than two decades, Phi Nhung and Manh Quynh were repeatedly suspected of dating in real life. During the show to celebrate his 20th career in Ho Chi Minh City in 2016, singer Huong Thuy once said that in the early days of singing with him, she was hated by many people for daring to “take Manh Quynh from Phi Nhung’s hands”. During a music night, after the singer finished singing, the audience did not pay attention to Huong Thuy’s record booth, only buying to support Manh Quynh. “When he was newly married, an audience thought his wife was me, so after the night of the concert, he came in front of both of them and asked directly: ‘Why did Manh Quynh dare to leave Phi Nhung to marry Huong Thuy’, making me tremble and he had to. constantly explaining,” Huong Thuy once said.

The couple once said that they are happy when they keep their friendship and soulmate. In the program Legendary duet night In Ho Chi Minh City in 2019, while singing, Phi Nhung suddenly turned to ask: “It’s been 20 years, why don’t you marry me?”. Manh Quynh laughed and replied: “Well, it’s better for Nhung and my son to get married.” The singer once said that when creating a performance with Manh Quynh, she did not need to prepare a script because the two understood each other too well. Having sung with Nhu Quynh, Huong Thuy, Mai Thien Van, Manh Quynh said it was rare for any female vocalist to make him feel in tune enough to perform love scenes on stage like Phi Nhung. In duets, she often rests her head and leans on Manh Quynh’s shoulder, while he uses a tissue to dab the sweat on her forehead. Once, sing Miss you again (Giao Tien), when she forgot her position on the stage, he pretended to bully: “Stand here again”. When she made a mistake, he teased: “Is it right that I sing this part?”

When Phi Nhung’s condition worsened, Manh Quynh prayed every day. On his personal page, at the end of August, he reminded his friends: “We still owe each other the remaining half of our artistic life. We’ve been together for a long, hard journey …”. On September 26, when he went on stage in a program that should have been Phi Nhung, he was lost because he missed his colleagues. Singer Huong Thuy said he offered to not sing with any other female singer, waiting for Phi Nhung to recover. They also unfinished a concert project to celebrate the 20th anniversary of the duet, which was scheduled to take place in August but had to be postponed due to the epidemic.

After Phi Nhung’s death, the audience for many generations reviewed the memories of a time when they were passionate about the singing of the “golden duet” through cassettes and CDs at home and abroad. Above VnExpress, reader Holly Le commented: “In the past, when I looked at the tape, I thought that you and I were a couple in real life. I wonder which female singer you will sing with now?”. Trang Nhung wrote: “All the memories I sent to you. I was angry and didn’t listen to Manh Quynh’s music for a while when he didn’t sing with Phi Nhung because he had engraved the sweet image of both of them. Now they are forever. can no longer sing together.”