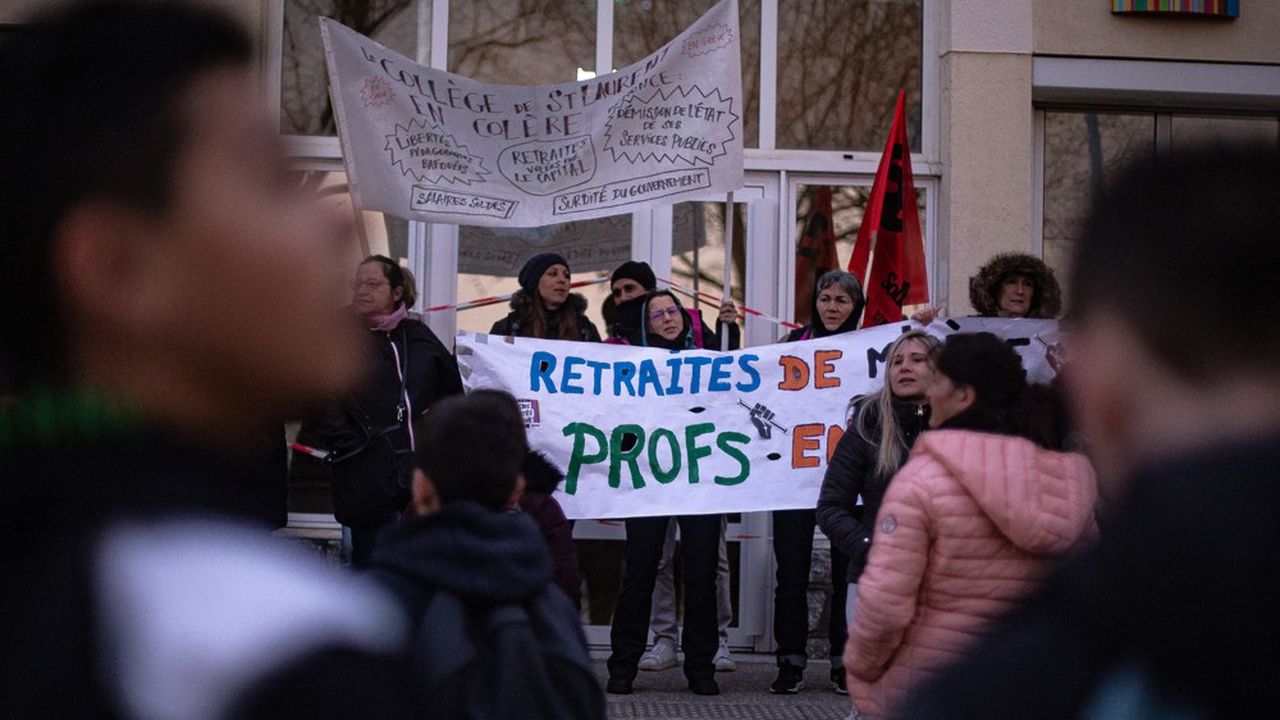 The movement against the pension reform is very followed in National Education, but the mobilization is less than in 2019. The Ministry of National Education announced this Thursday 38.5% of teachers on strike (42.35% in the first degree and 34.66% in the second degree). It was 47% in December 2019, during the strikes against the previous reform.

The main secondary education union, the SNES-FSU, announces a “majority” strike, with 65% of teachers, senior education advisers, National Education psychologists, educational assistants and accompanying persons. students with disabilities on strike. They were 75% in December 2019, according to this same source. “We felt in recent days that we still had room for improvement to convince new colleagues, not far from mobilizing”, indicates Sophie Vénétitay, secretary general of the SNES-FSU.

The union evokes peaks of more than 80% of strikers in certain establishments and colleges closed in several academies. “Our professions are demanding and exhausting both from a physical and nervous point of view”, affirms the union, referring to “people who [seraient] obliged to postpone their retirement in the face of an unbearable alternative: to work longer in very difficult conditions or to leave between the ages of 64 and 67 with a reduced pension”.

“Other movements to come”

The question of salaries is added to the dissatisfaction of teachers, while the Minister of National Education, Pap Ndiaye, received the unions on Wednesday evening to launch the timetable for negotiations on remuneration. A first meeting is scheduled for next Tuesday. Others will follow until March 13, the date announced for the “synthesis” of the discussions.

In the first degree, the SNUipp-FSU had already announced 70% of strikers, school teachers having an obligation to declare themselves 48 hours before the strike, to allow the organization of a minimum reception service. Its spokesperson, Guislaine David, on Tuesday judged the mobilization “comparable” to December 2019 (78% of strikers).

Unlike 2019, “this strike is unprecedented since all the unions are in this movement”, underlines Guislaine David. At the end of the day, a meeting must decide on the follow-up to the mobilization. “There will most certainly be other strike movements in the weeks to come”, indicated the spokesperson, Wednesday, on BFMTV, referring to “torchlight processions” or “mobilizations on Saturdays” which “associate parents students who support us.

“There will be mobilization […]including because some and others do not see themselves working longer or the same as what they had planned but to have a lower retirement, “said Stéphane Crochet, secretary general of SE-UNSA, to AFP on Wednesday. , assuming a rate of strikers of 65% in the primary.

Several movements of high school students and student organizations called to participate in the day of action against the pension reform. Their mobilization will be closely scrutinized by the government.