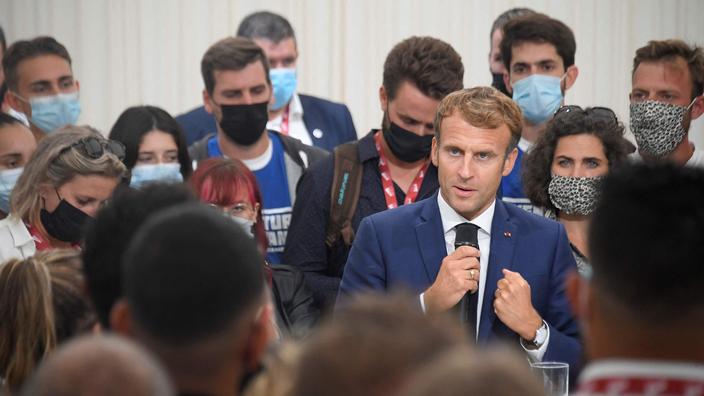 “There, we have other priorities”, launched the president during his visit to the fair “Terres de Jim” in Corbières-en-Provence (Alpes-de-Haute-Provence).

Pension reform “We will do that when we take off the masks” because “Here we have other priorities”, launched Emmanuel Macron to a farmer during his visit to an agricultural fair in Provence, confirming the executive’s choice to postpone this reform.

“We will have to move anyway. After that, you shouldn’t do it right away ”, he said, during a walkabout at the “Terres de Jim” fair in Corbières-en-Provence. “It will have to be done while listening to everyone. And then, we have other priorities, anyway “, with the Covid epidemic and the economic recovery to be carried out, said the Head of State, adding: “We will do that when we take off the masks, if I may say so”.

“Don’t worry about it all”, he insisted, “We have to be collectively intelligent” for “Find the right system to save our pensions.” “If we tell each other the truth, we live longer and longer, we study longer and longer. And who finances the pensions? It’s the people who work. How are we going to get the same pensions? “, he insisted. “We must find the right system to keep pensions” corn “Not to ask impossible things of people who work”, he concluded.

Prime Minister Jean Castex declared on Wednesday, at the end of a government seminar chaired by Emmanuel Macron, that the conditions for relaunching pension reform – pandemic under control and solid economic recovery – were “to date still not met” . Even if this reform “Is an absolute necessity” to restore the balance of the system, “We have the imperative duty to promote the unity of the country as much as possible”, he added, alluding to the opposition of the unions and the reluctance on this reform even within the ranks of the majority, a few months before the 2022 presidential election.

The hypothesis of a revival of the pension reform had resurfaced on Monday through an article in the newspaper The echoes according to which Emmanuel Macron intends to “Abolish special pension schemes and establish the minimum pension at 1000 euros” before the end of his term.