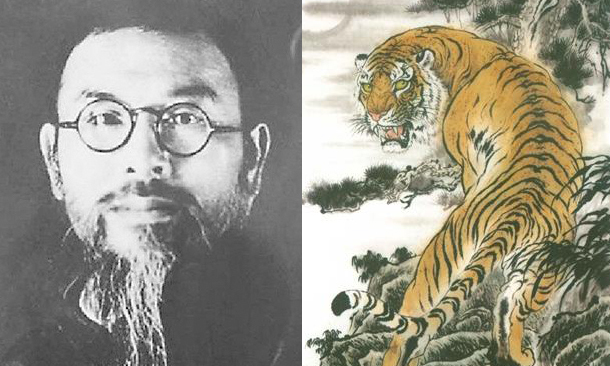 Truong Thien Tu (1882-1940) was known as “The First Si Tiger” in the literary world. Coil The best of tigers (Sichuan Fine Arts Publishing House) once published a series of photos of him with “the lord of the jungle”, including a picture of a tiger opening its mouth when taking pictures with the artist’s family, a tiger following him to a temple in Suzhou or a picture of him kneeling. pillow, face the tiger’s face.

Truong Thien Tu first raised tigers in the 1920s, then he asked a friend to buy tiger cubs from Japan. Then he was given another tiger cub by his friend. The artist day-to-day observes the animals, feeds them, puts them to sleep under the bed at night.

Painter and brother Truong Dai Thien – also a big name in Chinese painting – often watch tigers paint at home and open exhibitions. In the fall of 1934, Zhang Shanzi held an exhibition in Beijing, including the painting Huangshan the tiger god. Tong Triet Nguyen – General of the Republic of China – was impressed with the painting and offered to buy it. At first, Truong Thien Tu did not have the heart to sell his favorite work, but following the advice of his friends, he sold it for two thousand silver coins.

Now, one silver coin can buy 80 chicken eggs, 2000 silver coins is a large amount of money. Truong Thien Tu once said: “I should give Huangshan the tiger god for General Tong Triet Nguyen, but I kept a few tigers in the house, opened an exhibition again, it cost a lot of money, reluctantly took his money.” Tong Triet Nguyen did not mind this, on the contrary was very happy. Hang the picture in the living room of the house.

In the 1930s, paintings by the brothers Truong Thien Tu were exhibited in France and the United States. The French President at that time – François Mitterrand – once commented that Truong Thien Tu was an excellent representative of modern oriental art. The artist also went to the White House at the invitation of the current US president – Franklin Delano Roosevelt, to paint a tiger for the president.

Truong Thien Tu was born in the Quang Tu Dynasty, the Qing Dynasty. His father had a business but failed, then worked as a scrap collector to support his family. His mother was good at embroidery and painting. At the age of 23 (1905), Thien Tu studied Economics at Meiji University (Japan), then transferred to study Fine Arts. Returning to the country, he held a number of positions, but then left his career in politics, focusing only on painting.

Paintings of Truong Thien Tu have appeared on the auction market several times. Follow Artron, 2013, picture Twelve needles His property was sold for 10.5 million yuan (VND 37.5 billion). Experts say that the art of drawing tigers has high difficulty, so tiger works by famous artists have the potential to increase sharply. Quang Can Minh – an expert in the field of art auctions – said that most of the people who collect tiger paintings are for investment because of the prediction of great profitability.