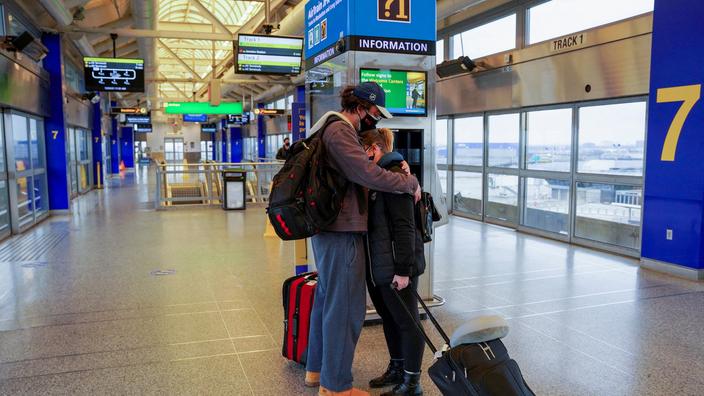 Many pilots, flight attendants and other staff have had to be quarantined after being exposed to Covid-19.

Nearly 6,000 flights have been canceled by airlines while thousands more were delayed around the world over Christmas weekend, in the face of the Omicron variant of Covid-19 which disrupts travel during the holidays. According to the Flightaware website, at 8:40 p.m. GMT on Saturday there were more than 2,650 flight cancellations, of which 940 were trips related to the United States, whether international or internal. More than 6,350 flights were also delayed across the world. Friday, about 2,400 cancellations and nearly 11,000 delays were identified according to the same source which already counts more than 600 cancellations planned for Sunday.

Read alsoWhere can we travel? Our map of open countries and restrictions for French tourists

Pilots, flight attendants and other staff members had to be quarantined after being exposed to Covid, which forced Lufthansa, Delta and United Airlines to cancel flights. According to Flightaware, United Airlines had to cancel around 200 flights on Friday and Saturday, or 10% of those that were scheduled. “The peak of Omicron cases across the country this week has had a direct impact on our crews and the people who run our operations“, Explained the American company, which assured to strive to find solutions for the affected passengers.

Delta Air Lines also canceled 260 flights on Saturday, and 170 the day before, again according to Flightaware, citing both Omicron and, occasionally, adverse weather conditions. “Delta teams have exhausted all options and resources“Before coming to these cancellations, pleads the airline. More than ten Alaska Airlines flights, of which employees said “have been potentially exposed to the virusAnd had to self-isolate in quarantine, were also canceled.

Chinese airlines were responsible for the most cancellations: China Eastern cut around 480 flights, or more than 20% of its flight plan, while Air China canceled 15% of its scheduled departures. These cancellations disrupt the desire to resume travel this year for the holidays, after a Christmas 2020 hit hard by the pandemic.

According to estimates by the American Automobile Association, more than 109 million Americans were expected to leave their immediate area by plane, train or car between December 23 and January 2 – up 34% from the year last. Fortunately, these disruptions did not have any consequences for Santa’s tour, which the North American Aerospace Defense Command (NORAD) has scrupulously followed for 63 years.

Read also“I didn’t want to wait until I was rich to travel”: four tips for traveling the world at low cost

“It is going very well so far, Santa has given out two billion gifts and he is currently above PakistanMajor General Eric Kenny, who commands NORAD for the region of Canada, told AFP at around 6 p.m. GMT on Friday.

SEE ALSO – Closing borders, is it effective in the fight against Covid?