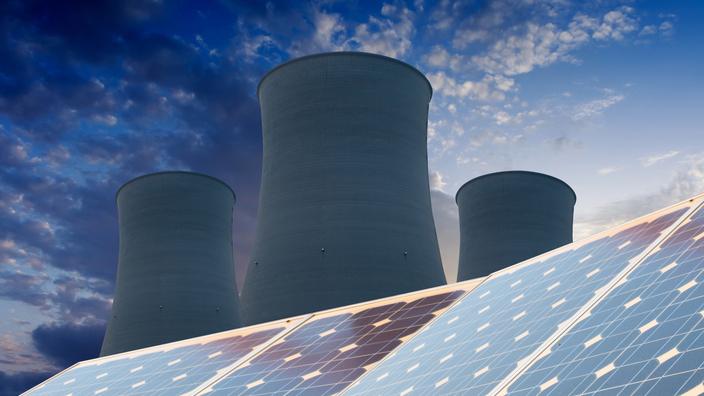 Developing new nuclear will cost less than betting on 100% wind and solar production, according to the network manager RTE, which publishes its conclusions on Monday.

This is a highly anticipated report, which may upset many people, both anti-nuclear and anti-renewable energies. The electricity network manager, RTE, also in charge of foresight, published on Monday its sum of 600 pages on “Energy Futures 2050», Commissioned by the government in 2019. The middle of the century still seems far away. But it is tomorrow in energy, where major investments amount to billions of euros and take 15 years to materialize.

In order to design the possible futures of France in terms of energy, RTE has tested 6 scenarios ranging from entirely renewable to 50% nuclear in 2050. Each of these scenarios has been designed to respect the objective of carbon neutrality of France in the middle of the century. All have been calibrated to guarantee the security of supply for the French: they are therefore certified without “black-out” by RTE.

Read alsoIs the electricity bill increasing less in France than elsewhere in Europe?

It is tomorrow because in 30 years, France must massively electrify its economy in order to no longer have to use fossil fuels. Electrons now account for 25% of the energy consumed in France – of which nuclear alone 20%. It should represent 55% in 2050. In three decades, the country will therefore have to invest massively in means of producing low-carbon kilowatt-hours.

France is engaged in a race against time which again limits its possibilities. The European Union has tightened its target for reducing carbon emissions this summer. By the end of this decade, they should have melted by 40%. “For 2030, we must develop technically and economically mature renewable energies and extend existing nuclear power.», Deduces Xavier Piechaczyk, the chairman of the management board of RE.

RTE therefore strongly advises against prematurely closing nuclear reactors to reduce the place of the atom from 70% to 50% by 2035. This will not please the executive, which has set these unreasonable objectives in the framework of multiannual energy programming. It also emerges that pulling off wind turbines already installed, as Marine Le Pen advocates, is not the best thing to do. “No realistic electricity mix can be based on a single technology and achieving carbon neutrality without renewable energies is impossible», Warns Xavier Piechaczyk.

Anyway, Emmanuel Macron holds in this report the justification for his very probable order for three pairs of EPR reactors. It will probably not be necessary to stop at 6 reactors. “Even a nuclear revival scenario with a minimum program of six reactors implies reaching particularly high rates of renewable deployment.», Warns RTE in an understatement.

It emerges moreover that “building new nuclear reactors is economically relevant», Writes RTE. Expanding the French electricity fleet will be expensive. In addition to the new means of production, the electricity network will have to be developed. However, the least costly scenarios are those which count for nuclear power, according to the report. A 100% renewable electricity mix would cost between 77 and 80 billion euros per year, against 59 billion for the most nuclear mix, made up of 50% EPR. Accepting such a difference in the bill therefore supposes a very strong opposition within the population to nuclear power. This is not currently the case in view of the various polls on the subject.

Alongside nuclear power, wind turbines and solar panels will nevertheless have to be strongly developed, insists RTE throughout the report. “Maintaining a large nuclear fleet on a long-term basis enables massive decarbonisation but is far from sufficient to achieve carbon neutrality», Insist the authors. The first EPR 2 reactor, with a power of 1.6 gigawatt, will not produce electricity before 2035. In the meantime, wind and solar parks must therefore be built, which are brought into service much more quickly. France has been installing them for ten years at a rate of 2 gigawatts per year. In the longer term, the nuclear industry warned during the consultation that it could not ensure a rate of reactor construction compatible with a mix tending towards 100% atom in 2050. It is indeed necessary to reckon with the closure, over the next 30 years, all of the existing stock, which will have reached 60 years of age. A cliff edge that is impossible to fill with the new EPRs alone.

The fact remains that the massive development of renewable energies will pose problems of acceptance in the territories concerned. Today, around 9000 masts stand on the territory. Even among the most nuclear-powered scenario, this figure will climb to between 15,000 and 20,000, including offshore fleets, RTE has calculated. This will represent a much lower density of wind turbines in 2050 than that of Germany today, RTE slips in passing.

Electrifying France by forced march will also have a cost. The electricity system as a whole now represents 45 billion euros of expenditure per year. In 2050, this figure will be between 59 and 80 billion. The cost per kilowatt hour produced will increase by 15% in 30 years. At the same time, RTE insists, France will have almost completely done without fossil fuels. The money spent on energy will stay in France and will no longer go to gas and oil producing countries.

SEE ALSO – Nuclear: what challenges for the sector?