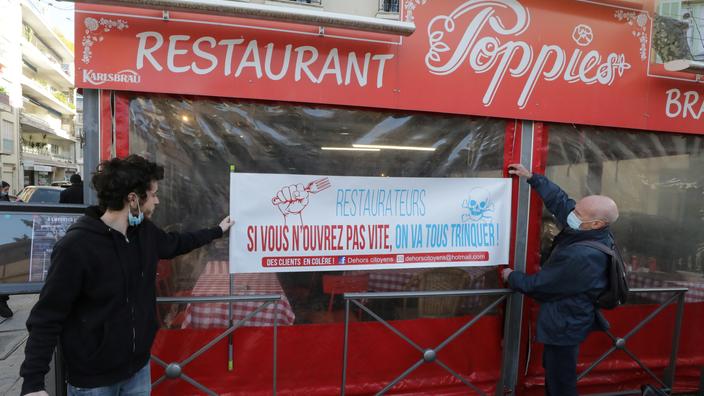 The case of Poppies, in Nice, has come to underline the efforts of Internet users to sabotage or improve the reputation of establishments on the Internet, sometimes unrelated to the qualities of the restaurant.

The weight of words, the shock of opinions. While the opening of his establishment by the Nice restaurateur owner of Poppies was the subject of considerable media coverage, on the internet, a more discreet battle was raging. On several online windows, including Google, Facebook and Tripadvisor, Internet users have indeed left comments, sometimes encouraging the manager, sometimes criticizing his decision to open his restaurant in defiance of health restrictions. Opinions far from trivial, as the famous online note can now have an important role in the activity of traders. Reopening your restaurant therefore represents a financial, legal and reputational risk.

On Google, the opening of the Poppies aroused contrasting reactions, violently negative or, on the contrary, ecstatic, having nothing to do with the quality of the service and the dishes offered by the establishment. The objective: to improve the overall rating of the restaurant and its reputation, up or down, depending on the political appreciation of the author of the review.

“Congratulations on your courage, and above all, do not give up in front of the garbage that dirties you, and that future generations will judge as the cowards they are!“, Encouraged an Internet user, promising that he would come”having dinner” in the restaurant. His comment was accompanied by a five-star rating, the highest possible rating. “The rebel from the bottom of the frying pan. Open in the midst of a pandemic. well doneAnother quipped, scoring the worst possible rating.

On the Poppies Facebook page, many political notices remain online: “conspiracy, facho and idiot. Here is the starter and dessert of this restaurant»(Sic), thus indicates an Internet user. Another “recommended»The restaurant, saying support him«With all my heart“.

SEE ALSO – Nice: a restaurant opens its doors and defies the ban in protest

An arsenal of tools against false or irrelevant reviews

The hosts are taking measures to deal with this kind of case, because the reliability of their rating system is at stake. They want to avoid seeing political or irrelevant considerations distort opinions based, in normal times, on the outright service offered by the establishment, such as food, for a restaurant.

Google quickly removed the offending opinions on the Poppies. Maps, which received “20 million contributions per day“In 2019, explains struggle”constantly against malicious actors, publishers of fake reviews on convenience stores who, unfortunately, use all kinds of tricks to try to abuse our system and circumvent its rules“. “Maps is not intended to become a forum for propagating personal attacks, or political or social commentary. Content that does not respect this rule will be deleted», Warns the company in its conditions of use.

The group keeps an eye on the contributions, thanks to an audit “manual», But also thanks to automated detection systems capable of spotting suspicious reviews. These tools remain secret, “so as not to reveal them to malicious actors“, We specify at Google, while acknowledging that”still work to do“.

Read also :Can we really trust the reviews on Tripadvisor?

At Tripadvisor, following the events of the Poppies, comments on the restaurant page have been blocked and a banner now appears. “Due to a recent event […] Due to the fact that many reviews were sent that did not describe a direct experience with this establishment, we have suspended the publication of new reviews», Announces the site.

Tripadvisor explains to Figaro having applied a “lockout notice”, A standard procedure in similar cases. The site, which validates reviews before publishing them, uses two types of controls: one, technological, relies on tools to identify abnormal influxes of reviews over a short period. The other, human, checks the alerts raised by the detection system. “When unusual behaviors are spotted, they are passed on to auditors, who look to see if there is a problem.», We explain. And, when a restaurant is targeted and the reviews relate to something other than a direct, verified experience of a consumer visiting the establishment, the lockdown is pronounced. It will remain active from “a few days to a few weeks“, The time for attention to fall.

ALSO LISTEN – “Half of the restaurants could close in 2021”

Online reputation, an issue that has become crucial for companies

These platforms are not the only ones to monitor these behaviors. Each has its own method. The Steam platform has strengthened its policy against “bludgeoning off topic“In March 2019. An IT tool detects”abnormal evaluation activities on all Steam gamesAnd reports them to a dedicated team, which is investigating the matter. Behind that, even if it turns out that these behaviors were aimed at lowering a game’s rating, Steam will keep the reviews online, but none of those written in the period of the bludgeon will count toward the overall rating. Last February, Steam indicated that it had gathered its teams to observe the bludgeoning “44 times so far“.

This question is not taken lightly by the establishments and services concerned either, as online reviews have become essential for their good visibility and attractiveness. Getting a bad rating on Google can put off people from doing a quick search for a restaurant before ordering. On the contrary, a good mark can reinforce the act of purchase. At the end of 2019, an OpinionWay survey for Opinion System thus highlighted that 74% of business leaders consider Google reviews to be an essential activity lever … but risky. And, on the internet, everything remains: an opinion can therefore have an impact in the long term.