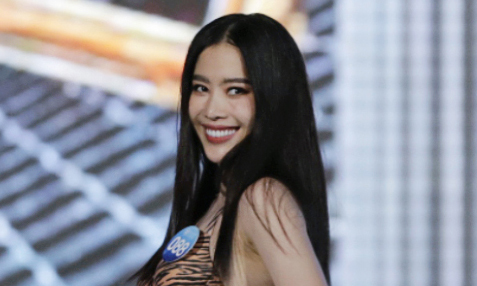 Thai NguyenNam Em, Mai Phuong, Nguyen Thi Phuong Linh entered the top 38 of Miss World Vietnam, after the final round on the evening of April 24.

The organizers also announced that Nam Em won the title of Media Beauty, she was given a special chance to continue. Before that, the contestant scored with a fresh performance style, which was supported by many viewers watching the night of the contest. The beauty is 1.72 meters tall, weighs 56kg, measures three rounds of 88-65-96 cm.

Nam Em is the contestant with the most titles this year, is Miss Mekong Delta 2015, entered the top 8 Miss Earth 2016. She has the advantage of name, plus the ability to sing, but is at a disadvantage because weak. The beauty had to give up the beauty tour part because she said she had a vestibular disorder.

Vu Nhu Quynh is the most favorite beauty, voted by the audience. She is 23 years old, a student at Orient University (Hanoi), once in the top 5 of Miss Capital 2019. However, the two titles above only helped Nam Em and Nhu Quynh reach the final. The contestants will compete for this award again in the final round in August.

Most of the outstanding contestants from the beginning of the contest were selected for the final. Huynh Nguyen Mai Phuong – top 5 Miss Vietnam 2020 – won Talented Beauty. She scored points with singing, dancing cover songs Look What You Made Me Do by Taylor Swift. Having experience in combat, she stands out in many activities, entering the top 5 in many sub-competitions such as talent, fashion, and travel.

Nguyen Thi Phuong Linh won first place in the beauty contest. When challenged to introduce a place, she chose Sa Pa (Lao Cai) – a place with unique cuisine, scenery, and friendly people. Her Vietnamese presentation stutters but speaks English fluently. Le Nguyen Bao Ngoc, the tallest contestant (1.85 m), won the Fashion Beauty activity on the night of the contest on April 17. Three sub-prizes on fashion, tourism, and talent remained unchanged until the final round, helping the winners to go straight to the top 20.

Some other favorite contestants such as the girl with three bloodlines Luong Hong Xuan Mai, the 1.8 meter tall Hue girl Ho Thi Yen Nhi… were also named. The girls created an exciting atmosphere through the performance and swimsuit competition. The night of the competition was not much dramatic, alternating performances of singers My Linh, My Tam, Duc Tuan, Isaac, Van Mai Huong, Duong Hoang Yen… Top 38 will participate in side activities before the joint competition. concluding in August in Quy Nhon, Binh Dinh.