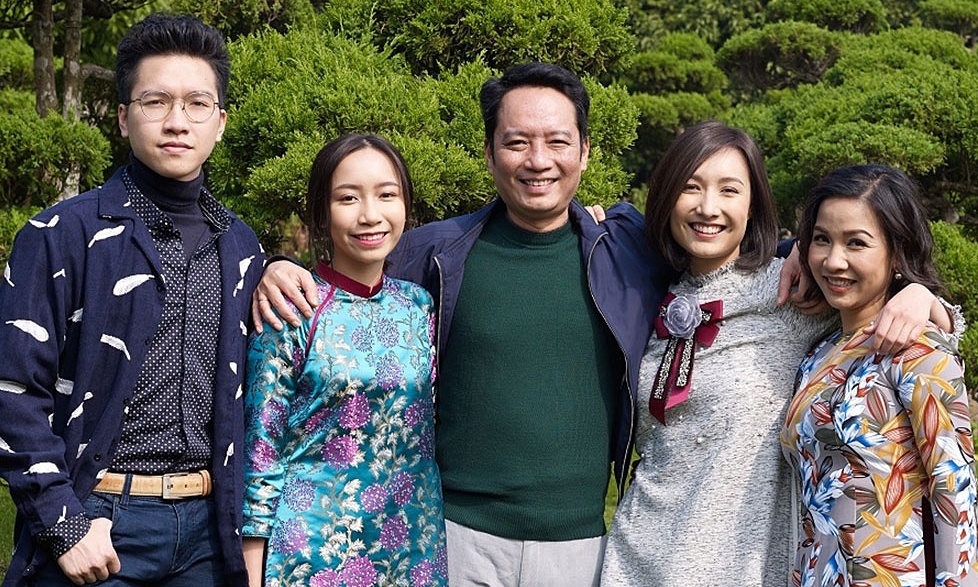 Knowing that their parents’ income was affected by the epidemic, Anna Truong and My Anh sent money to the couple My Linh – Anh Quan to support the economy.

– Her youngest daughter – My Anh – recently appeared on Korean television, sang in the US, won runner-up The Heroes. What do you say about your child’s success in the first year of singing?

– The day My Anh sang on KBS (Korea), my family held a small party, watched the children together, feeling lightheaded and happy. At this time, I understood the mother-in-law’s words: “When your child succeeds, you will feel even more wonderful than when you stand on the podium”. In the next year, My Anh will be given a professional stage by 88rising – a company that brings her children to the US to perform – for a professional stage with a better time frame. Previously, Anh Quan and I wanted to bring Vietnamese music to international friends, but we couldn’t. Now I have started to fulfill my parents’ unfinished dream.

– How did you witness the efforts of My Anh last year?

– I always say that the children of this generation must “be overcame”. Born into a famous artistic family, I have pressure to assert my “me”. New Year’s Eve, mother and daughter are invited to sing at an event. I said, “Mom, this is the first time they’ve invited both of us without asking me to do a duet with you. So I’m already an independent artist, not just your daughter.” Listening to her talk, I felt a little heartless, thinking that singing with my child would be fun. I think in the past year, the child has partly affirmed his ability, making his parents proud.

My Anh was originally a shy and nervous girl. Children have many psychological burdens but do not share them with their parents. I see her come up with her own cardio exercises, practice so that in case she can’t keep calm, her heart beats fast but her voice doesn’t shake. After she finished her performance in the US, we found out that she had not slept for a week before, hoping not to get a visa.

Many people say that My Anh looks like me when I was young. I see that my son is better than me. I’m not a child of the family, very naive, naive, I can only stand still when singing. It wasn’t until the age of 23, when I met Anh Quan, that I began to have an idea of ​​the path I would take. My Anh learned choreography from a young age, flexible body movements when performing. I have a lot of exposure to world music, self-defined career goals.

– As a pioneer in the profession, what advice do you give your children?

– I work more professionally with you, because both are producers. In terms of vocals, before, she refused to study with her mother, only practiced with me for a year. I do not impose my experience, but let my child develop freely. Although I learned how to talk, converse, and befriend my children, sometimes I can’t avoid the mother’s nagging style, which makes children feel suffocated.

Around May, My Anh will move out and live on her own. I think this is essential for children to learn to be independent. At home, adults often treat their children like children, worrying, reminding them of everything, making them slow to mature.

– You are interested, how do you connect with the eldest daughter in the US and the son in Australia?

– We still regularly call to visit and update the members’ situation every day. Duy has a lot of stressful times because his friends have rented accommodation and have returned home to study online. If you follow the medical profession, you must stay and practice directly. Duy’s work and income were also affected. Before the epidemic, I worked as a waiter, taught dance… Now the conditions for applying for a job are more difficult, I go to support free vaccinations. I always teach my children to live thrifty and optimistic. Anna in the US has a stable job. She is a mature and mature child, which worries us the least.

– Her eldest daughter – Anna Truong – wanted to be a performer, but later became a music producer. What do you say about your choice?

– I respect all decisions of the children. Anna works at a studio in the US, has a busy job, has a good income. One of the wisest decisions in my life was to love and raise Anna as my own child. Back then, Anna’s German mother didn’t want to leave her child at first. Quan and I took a lot of convincing to bring our children to Vietnam to study. My son was three years old at the time, and gave me the precious experiences of a mother. The first time I took my child to school, the first time I held the good child ticket, the certificate of merit from Anna, I was in tears. When Anna first arrived at Berklee College of Music, we had to hold back our nostalgia to take care of her education. Later, when Duy went to school, I was more “bottled” because I was used to it, no longer emotional.

When I was a kid, I idolized my brother, always listening to everything he taught me. Therefore, I taught Anna carefully, little by little so that she could set an example for them. Later, Duy and My Anh also considered Anna as an idol, always consulting her. Anna also took care of the children on behalf of her parents. I know that my parents are facing difficulties during the pandemic, so I send money to help Duy’s life. My Anh also studied with her sister, giving her money to sing and advertise for her parents. I only keep a small part to buy things I like, make products. I am glad that the children are independent and know how to share. For the past two years, my wife and I have had almost no income, living on savings. We have economic pressure because it is very expensive for our son to study medicine in Australia.

– The oldest daughter is about to get married, the two second children both have girlfriends and boyfriends. What advice do you give your children about love?

– Anna and Anh Duy are both grown up and understanding, I don’t have to instruct them much. Anna’s fiancé has been with my family for a long time, was the drummer in the band that played on my tour in 2018. With My Anh, I didn’t officially introduce my boyfriend but I guess. I told my child: “Love is not all pink, love has both sweet and bitter fruit. When in love, you can enjoy happiness, but you may also experience pain. The important thing is that you You need to know how to protect yourself.” I think, every child will stumble in love but it is an experience on the journey of adulthood.

– What plans do you and your family have for the new year?

– This year, my family will welcome many joys. In May, Anna will hold a wedding in America. In July, I returned to Vietnam to have a party. Our son-in-law will also stay for a while, supporting My Anh to make his debut album. Last time, I revealed Anna’s engagement, and was scolded by My Anh. I said: “Why did your mother announce this important matter. You are the one who has the right to say it”. The children now have a high degree of independence, and I simply think that: It doesn’t matter if it’s the children’s story, the parents will announce it.

In the past two years, I rarely sang, got used to teaching music online. I recently collaborated with artist Thanh Bui to open a new music school called The Rock & Pop Academy Hanoi, with the goal of training Vietnamese musical and dance talents according to international standards. I am satisfied because when I was a child, I dreamed of being a teacher like my father, now I can sing and teach music at the same time.