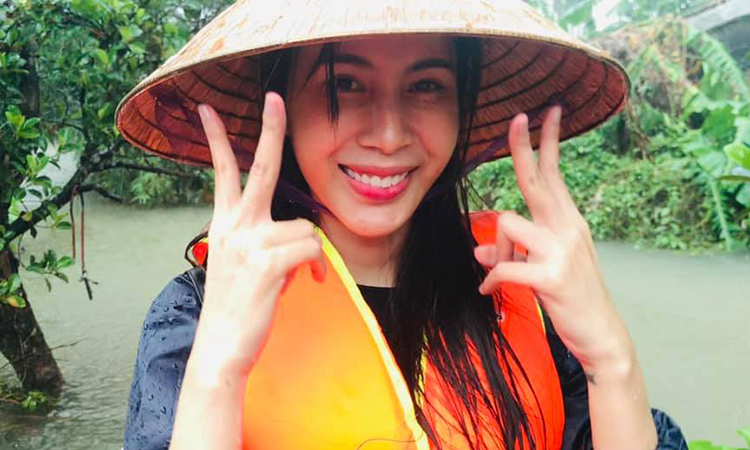 Musician Hoang Thuc composes and sings the song “You are Miss Tien”, encouraging singer Thuy Tien’s spirit when she bail out Central Vietnam.

Hoang Thuc said he has been following Thuy Tien’s volunteer activities for a long time. When he saw that she was in danger of going into the mind, he wrote emotionally I’m Miss Tien. The song has a bright melody, lyrics, and a hint of cheerfulness. He wrote songs in one day, edited it, recorded it in another day. The track has the following:

“Rainy and stormy day after day
My boat stands unsteadily
Love bonding, flood relief
Central region is difficult, so many worries
I wish to help the people “

Musician Hoang Thuc was born in 1970, working at the Department of Arts, Radio and Television of Dak Lak. He used to compose some songs like Mountain flower (to Miss H’Hen Niê), I love you …

On the morning of October 29, Thuy Tien and her husband Cong Vinh were present in Le Thuy district (Quang Binh) to give cash to support people in distress. Two days earlier, she departed from Ho Chi Minh City, then drove to Ha Tinh. Thuy Tien plans to use more than 150 billion dong to call for funds after half a month to support cash, build bridges, build and repair some houses that collapsed due to floods … for the people. This time, the singer asked people in floodplain areas to register the list with the village leader. She will publish information on recipients for support so that people can follow along, limit missing names or happen negative situations.

Thuy Tien – Cong Vinh went to the Central region before the 9th storm hit many fans. On her fanpage, many viewers expect the couple to stay healthy and safe.

Cong Vinh said on October 13, his wife escaped to Hue to participate in the relief work, although he advised her to wait for the sprint, the situation was less dangerous and he completed the job for the couple to accompany. For six days in the Central region, Thuy Tien directly gave gifts and cash to each household. With the cases of children and students in extremely difficult circumstances, she promised to support tuition fees for them until they entered university.

On the morning of October 28, the Molave ​​storm hit the Quang Nam – Quang Ngai area, killing 2 people and missing 55 people. More than 220 houses collapsed, while another 590 houses had their roofs blown off. One suspension bridge in Kon Tum and 2 bridges in Binh Dinh province were washed away. 13 landslide points on Ho Chi Minh road West branch, 7 points on Highway 49. From now to October 31, provinces from Thanh Hoa to Quang Ngai with heavy rains, mountainous areas will face the risk of flash floods and landslides. land; flooded areas.