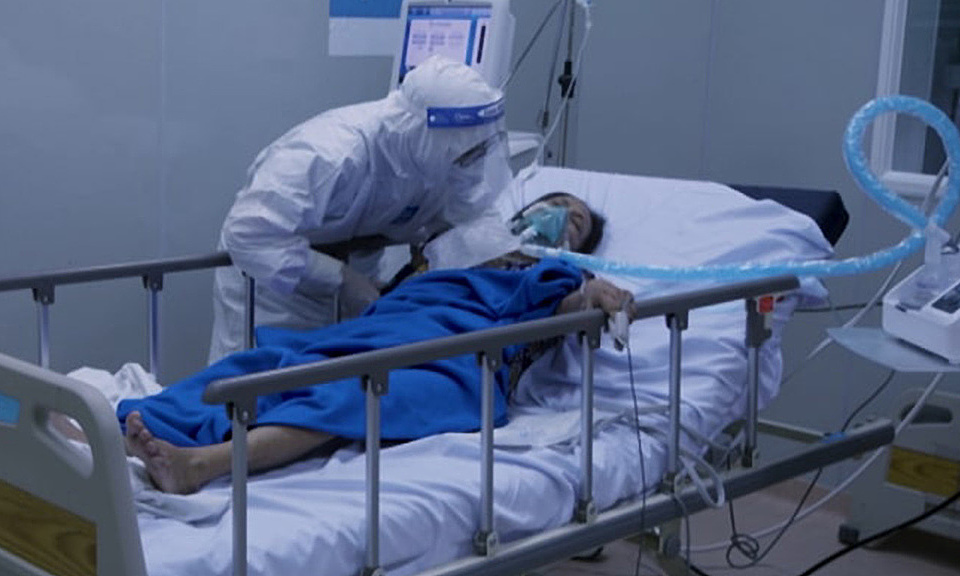 A volunteer in Ho Chi Minh City, who is almost paralyzed in one hand, still carries an oxygen tank to help the critical F0, in the documentary “No Fear”.

Bui Thac Chuyen’s work was released in mid-July, a year when the director moved from North to South to perform the work alone. The film is divided into 5 episodes, each episode revolves around a group of characters such as front-line medical forces, volunteers, benefactors… They are slices that make up a picture of many bright and dark colors of the period. The period of Covid-19 raging in Ho Chi Minh City and Binh Duong.

Not fear recreating the memory of the epidemic through the story of an insider. Facing the camera, eyewitnesses reminisce about a tumultuous period with varying moods. Some people are calm because they have overcome the loss, but there are also people who cry when the pain is still there.

The director doesn’t intervene with commentary, letting the characters narrate their story. In episode three – Not aloneAfter recovering from Covid-19, a couple of brothers in Binh Duong applied to work as volunteers at Thu Dung hospital to take care of their father. For her younger brother, the time spent at the hospital bed is a series of haunting days of her life. Together with the doctor taking care of the patient, they witnessed many people laughing and talking one day, then the next day they changed seriously and died when they were transferred to the intensive care unit. The fear of the two brothers grew as the father gradually became critical. Worried that he would not survive, they wrote a letter, asking the doctor “if something happens to your father, dress him in a suit”. When the letter reached the nurse, many lines were smeared with tears of the writer.

Episode five – Don’t give up – revolves around the adversity of a 17-year-old girl in Ho Chi Minh City, whose parents are infected at the same time, are taken to treatment. After days of losing contact with her father, she fell to her knees when the doctor informed her of his death. A few days later, on the occasion of her mother’s birthday, with 100 thousand dong left in her pocket, she went to buy cakes to pray for her mother’s well-being. As soon as she took the cake home, she heard that her mother had passed away. Talking to the director, the female student said: “Sometimes, I wonder why life is so unfair to me. When I was young, I had a disease that almost died. After that time, I think my life will be from here on out. peaceful, will get married, be led to the altar by father like many people…”.

Many details and scenes appear fleetingly still make the viewer’s heart ache. Episode two – Don’t run away – recorded a scene of a volunteer of Oxy Saigon – a group that provides free oxygen to the people. As soon as he contacted the patient, he was informed that this person had died, he could only say “God”. The rows of poorer workers’ hostels are deserted because many people go for treatment but never return.

Without focusing on pain, the film mainly highlights the story of human love. During the new outbreak, a young doctor was advised by his family not to go to the front line for fear that he was in danger. “My friends are fighting the epidemic day and night, I’m not at home at home,” he replied to his father at that time. During the days of taking care of patients, he became a reluctant midwife when an F0 pregnant woman went into labor. The young mother then named her son Thinh after the doctor. A teacher recalls the early days of volunteering, still awkward and clumsy when wearing a medical protective suit. Many small but evocative situations, such as doctors buying sports equipment from their own pocket to practice recovery.

The director made an effort to portray the story of a “hero in everyday life”. A volunteer with a nearly paralyzed arm after the accident, still carries an oxygen tank with ice in the alleys. When asked about the reason for going to help people even though he has not been vaccinated, the young man from the Central region said he wanted to repay the city for taking care of him. The film also aims at a positive message about friendship, with the story of a 90-year-old grandmother still overcoming illness, returning to her husband and children, smiling when he wrote poetry for her.

The director tells the story with a variety of image processing. The still frames capture the deserted city scene, without the shadow of cars. In many treatment areas, seriously ill patients are lying but still, only the sound of heavy breathing can be heard. Bui Thac Chuyen has many shots following the character’s footsteps, depicting scenes of sweaty volunteers carrying oxygen tanks in protective gear, or doctors with medical bags riding motorbikes in every corner, coming to hospitals. poor households. At times, the director integrates material from CCTV, video taken from a character’s phone… The figures and charts are illustrated in a moderate way to systematize information and provide an overview.

Audience Lucas Luan Nguyen said that at first, he was afraid that the work would get entangled in the way the story was painted. After watching 5 episodes, he assessed the director still sticking to the truth, besides reflecting the extraordinary examples of ordinary people, not only doctors. This audience said: “However, I think the film is not for everyone, because there are wounds that have not yet healed. Please consider and only watch if you are ready.”

Documentaries are often controversial about the privacy of insiders. Bui Thac Chuyen said that was one of his top concerns when making films. In some cases, he chose to blur his identity, in the rest, the characters cooperated. The brothers in Binh Duong sent the director pictures of his father’s life for him to edit. A doctor said he was almost depressed after many months of fighting the epidemic in Ho Chi Minh City. After confiding in the director, the character thanked him for being relieved of some of the burden.

Bui Thac Chuyen said that when choosing an optimistic message, he did not shy away from the losses behind. “I just think a lot of people were tired of reality at that time. I wanted to bring a positive spirit: If fear is less, people will understand how to deal with future pandemics,” the director said. He is continuing to edit movies to release new episodes.

Director – screenwriter Bui Thac Chuyen was born in 1968 in Hanoi. In 1995, he studied at the Acting Faculty, Hanoi University of Theater and Cinema, and became an artist of the Vietnam Drama Theater. In 1997, he studied directing, attracting attention with the work Night ride – The first Vietnamese film to win the Cinefondation Short Film category at the Cannes International Film Festival. In 2005, the movie Living in fear He has won many national and international awards. Director and founder of the Center for Support for the Development of Cinematic Talents (TPD), Vietnam Cinema Association since 2002.