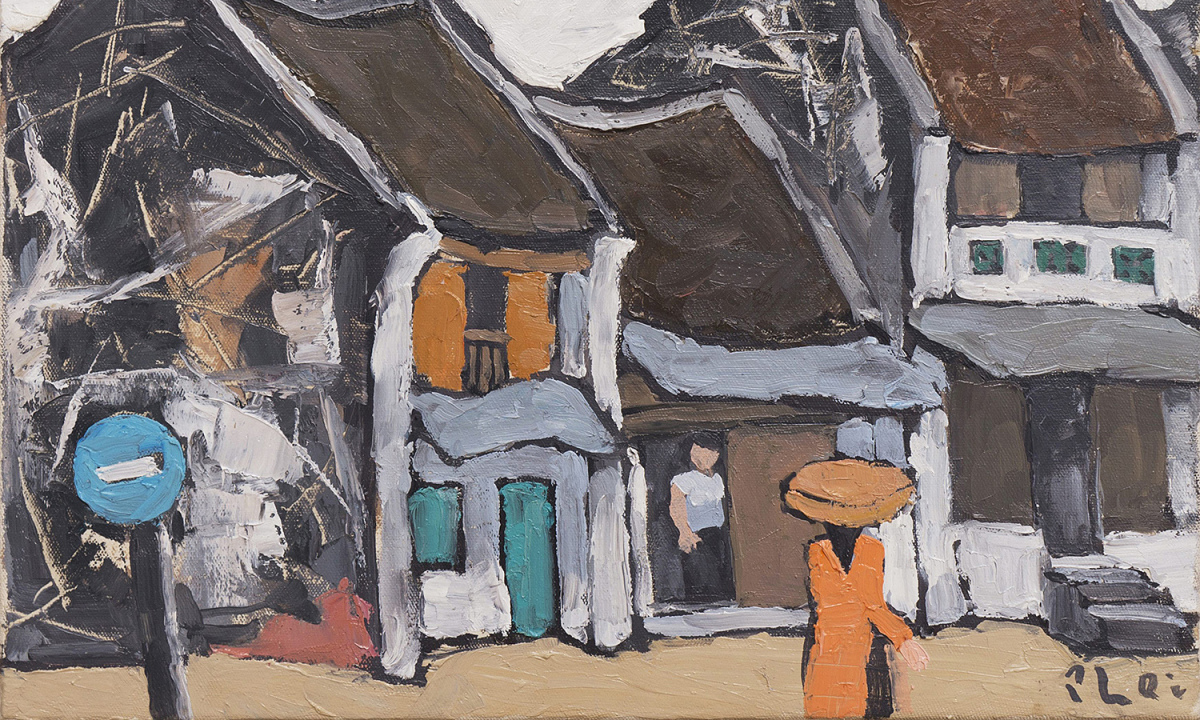 Ho Chi Minh CityMore than 50 paintings by painter Bui Xuan Phai – many of which he painted at the end of his life – have been published for the first time.

During the exhibition introduction Remember painter Bui Xuan Phai (June 24 – July 4) on the morning of June 22, collector Tran Hau Tuan – the organizer – said that the event will display 60 oil and gouache paintings. 90% of the works are shown to the public for the first time. He cherished the idea of ​​implementing 2020 on the 100th anniversary of Bui Xuan Phai’s birth, but had to postpone it because of the epidemic.

Tran Hau Tuan has collected paintings from many famous artists since the 1980s and has a great passion for the works of Bui Xuan Phai. For him, Bui Xuan Phai’s paintings transcend the interpretation of words, which can only be felt by the mind. Last year, when Ho Chi Minh City broke out because of the epidemic, many nights he just sat in his room and looked at the paintings. “When looking at the paintings on the wall and the table – because many small paintings have to be displayed on the table, I feel like I have escaped from reality to come to beauty. They energize me to overcome the pandemic. I learned many things. both from his paintings and his artistic work life”, Mr. Tuan said.

The works on display revolve around familiar themes of Bui Xuan Phai, such as “Pho Phai” – Hanoi’s ancient spectrum, “Cheo Phai” – behind the scenes of cheo stage, illustrating the poetry of Ho Xuan Huong, rural North. … The collector is interested in the array of Hanoi streets in the series of paintings. Many people refer to Bui Xuan Phai’s paintings, often talking about bare tree trunks, lonely lampposts, and sad contours. Tran Hau Tuan is impressed by the sunny moments in his paintings, with the colors of yellow, red, orange, and blue dotted on the familiar gray-blue background. Mr. Tuan commented: “Bui Xuan Phai’s paintings not only have dark brown tile roofs, ancient moss, but also splendid red tile colors, children holding hands in bright colors …”.

The event also exhibits many works painted by Bui Xuan Phai at the end of his life. Painting The ultimate self-portrait made in 1988 – a few months before the artist’s death, there is a line of his caption: “Now all that matters is health and no disease”. The drawing of his sleeping wife had not yet been completed. Many notebooks record the painting philosophies of Bui Xuan Phai such as: “Draw a picture, don’t be satisfied soon, the more you draw, the more new you will find better than the old good ones, but sometimes fail”. “Keeping the soul clear, beautiful and young, that’s the closest way to art”… The exhibition also has a corner to introduce many moments of Bui Xuan Phai’s portrait, or the reunion of the artists. Mr. and friends such as musician Van Cao, painter Nguyen Sang…

Many colleagues and spectators eagerly visited the exhibition before the opening day. Although he is familiar with Bui Xuan Phai’s drawings, painter Le Dai Chuc said he has never ceased to be amazed. The artist said: “His paintings are very simple because he mainly paints streets and cheo, but viewers can see the innocence and sincerity. Thanks to his sincerity, the work has a lasting vitality with the public”. In his youth, Le Dai Chuc once invited Bui Xuan Phai from Hanoi to Ho Chi Minh City to stay at his house for three months, observing how the artist painted and studied.

Critic Nguyen Quan is interested in the style of painting in Bui Xuan Phai’s paintings. According to him, in many paintings that have received less attention than “Pho Phai”, such as rural activities, the artist still creates a standard for the next generation to follow. Nguyen Quan said: “Many people praise Bui Xuan Phai as the most nationalist painter. To me, he is the most ‘Western’ painter, painting only 100% with European materials, painting, and brushstrokes. bold École de Paris (school in Paris, France in the first half of the 20th century)”.

On the occasion of the exhibition, Tran Hau Tuan made his debut Painting by Bui Xuan Phai and I (Young Publishing House), including 12 of his articles and photos of a series of paintings in the collection. Second book Bui Xuan Phai – The eye of the heartincluding 25 reviews by 14 researchers, collectors, writers and artists… about the artist.

The late painter is famous for his paintings of Hanoi’s Old Quarter, documenting the social changes in the capital in the 20th century. His paintings use a variety of materials: canvas, paper, and boards. wood, even on newspaper and using oil paints, watercolors, pastels, charcoal, pencils… In his lifetime, the artist had only one solo exhibition in 1984. After his death, his family The family and the art world have exhibited about 15 times of Bui Xuan Phai’s paintings.