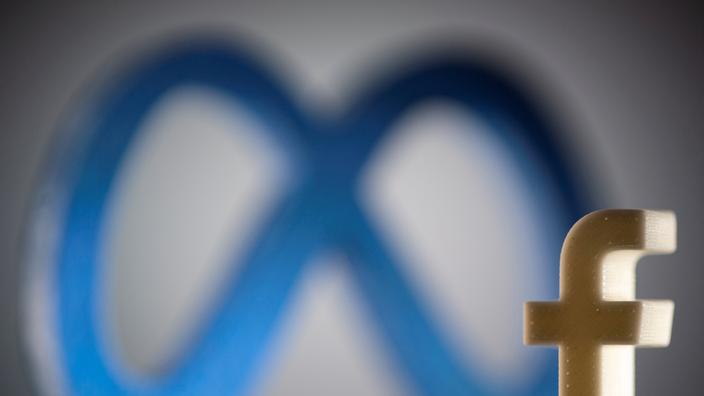 If the turnover of the Californian group has climbed into the upper range of its forecasts, for the current quarter it is only counting on 27 to 29 billion in revenue.

Meta, the parent company of Facebook and Instagram, made $10.3 billion in net profit in the fourth quarter, down 8% from a year ago, according to a statement released Wednesday.

Read alsoFrom Facebook to Meta: why does a company change its name?

The social networking giant, which wants to reinvent itself with the metaverse, disappointed investors: its title fell by around 20% during electronic trading after the closing of the New York Stock Exchange. The Californian group has reached a turnover in the high range of its forecasts, 33.67 billion dollars. But for the current quarter it does not table “than” on 27 to 29 billion in revenue, a prospect that does not delight the market, accustomed to more growth from the company.

Meta explained that it is having a harder time holding users’ attention because of competition and also indicated that they are spending more time on “Reels”, a short video format inspired by the TikTok application, “which generates lower rates of pay” than the classic Instagram formats.

Above all, the group had warned that the rules imposed by Apple last year in terms of advertising targeting could have negative consequences on its financial results in the fourth quarter. In the update of iOS, its mobile operating system, the Apple brand has required application publishers to seek permission before collecting data, to the great regret of companies like Meta whose business model is based on the sale of finely targeted advertising based on consumer tastes and habits. This ethical and technical change “affects Meta’s ability to gauge the performance of advertising campaigns”explained Debra Aho Williamson, analyst at eMarketer. “We estimate that some advertisers began to partially withdraw from Meta in late 2021 and early 2022, to test alternative digital channels”.

These are the first results that the American group has published since its name change at the end of October. CEO Mark Zuckerberg then announced that his company intended to focus on the “metaverse” (contraction of “meta” and “universe”), perceived in Silicon Valley as the future of the internet. In this future that evokes science fiction, the public will use augmented reality and virtual reality glasses to find themselves, work or have fun in these parallel universes.

But its construction has so far translated into tens of billions of dollars of investment in the Facebook Reality Labs branch. Adam Mosseri, the boss of Instagram, announced on Wednesday that users can now create their avatar, intended to serve as an identity in the metaverse. “It’s a virtual representation of who you are, more dynamic than a profile. You will have clothes that you can wear (…) and also money, and any digital goods that you own”, he said in a video. The goal is for people to be able to “to take this identity and these assets wherever they go in the metaverse, on the apps made by Meta or by any company in the world”he added. “There is a lot of uncertainty around these investments”noted Debra Aho Williamson. “Meta will no doubt test ads and e-commerce in its Metaverse apps this year, but these efforts will be very experimental and are unlikely to result in much revenue in the short term”.

Investor confidence is also damaged by the major failure of Diem, the digital currency project launched with great fanfare in 2019 to offer a new method of payment outside traditional banking circuits. The independent entity that took care of it from Geneva announced on Monday that it was going to sell its main assets and dismantle itself for lack of having been able to convince the regulators. “When a company fails to achieve its goals, these failures speak volumes about its potential in terms of project execution,” responded independent analyst Rob Enderle.

In addition, “Mark Zuckerberg raises more and more concerns”he assured. “He is, in practice, the only owner of the group who cannot be regulated and he continues to make mistakes”. Meta faces numerous investigations and complaints for abuse of dominant position. And his reputation deteriorated further in the fall when a whistleblower leaked internal documents. She hammered in the American Congress and in European parliaments that the firm passed “profit before safety” of its users. As of December 31, 2021, 2.8 billion people visited one of its four platforms and messaging services (Facebook, Instagram, Messenger and WhatsApp) at least once a day (+8% over one year) and 3.6 billion least once a month (+9%).