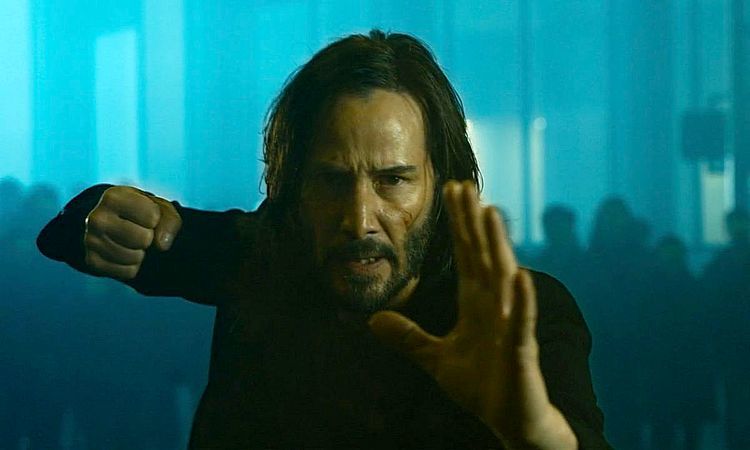 The duo Keanu Reeves and Carrie-Anne Moss did not help “The Matrix: Resurrections” escape the “estranged” of critics and audiences.

The story of the film is set 60 years after the events of the previous part. Machines are still ruling society, controlling people’s minds by confining them to a computer-programmed virtual world. The free members infiltrate the Matrix, freeing the prisoners by helping them distinguish between real and fake worlds. Among them, Neo (Keanu Reeves) is said to be a special character, born to save humanity because of the ability to break the rules of the Matrix. However, he is still stuck in the virtual world as a game programmer named Thomas A. Anderson, with no memory of the past.

The work marks the return of the brand Matrix after 18 years since The Matrix Revolutions (2003), the first time Lana Wachowski directed without her sister Lilly Wachowski to help. The screenplay, which she wrote with David Mitchell and Aleksandar Hemon, is built as a standalone story but has details that link the entire series. The plot of the first half is a bit like The Matrix (1999) while Neo was trapped in the Matrix. Then, a character named Morpheus (Yahya Abdul-Mateen II) appears, asking him to choose between two pills: one green, one red. If he takes the blue pill, Neo continues to live in the virtual world while the red pill helps him learn the truth about the Matrix.

The team got creative by adding some new characters. For example, the blue-haired Bugs (Jessica Henwick) is a fan who joined the rescue team Neo, while the Analyst (Neil Patrick Harris) is the one disguised as Neo’s psychiatrist to keep him in Ma. Battle. The script also has many changes such as Trinity (Carrie-Anne Moss) is still alive, often meets Neo in the virtual world but does not remember him. Although 60 years have passed, the duo is only 20 years older because of the control of the machines. Two important characters, agents Smith and Morpheus, are no longer played by Hugo Weaving and Laurence Fishburne, but by new actors.

The screenplay of the film received many criticisms. The newspaper’s Johnny Oleksinski critic New York Post Rating 1/5 stars, commenting the work is the worst sequel ever made, the story is boring and long, many characters act silly. Kevin Maher’s pen The Times thinks there’s no reason for the film to exist, judging its immature, error-prone storytelling. Sheet The Guardian The work is like a bitter pill for fans, born just to make more money for the studio.

The way the director builds and leads the story is quite confusing. In the first hour, viewers who have not seen the previous three seasons can hardly imagine what is going on. Some old footage from the previous seasons were used, but there were also segments that were reconstructed to resemble the first to evoke fans’ memories. Typically, Neo has a duel with Morpheus in a Japanese-designed room, or Neo dodges a slow-flying bullet.

The action and effects are at a good level but do not surpass the shadow of the previous parts. 1999, The Matrix won four Oscars in 2000 in the categories of visual effects, editing, sound and sound. The work was highly appreciated for pioneering the “bullet time” effect and the 360-degree slow-motion technique. Entering this year, Lana Wachowski just repeats herself instead of creating new effects. As technology becomes more and more advanced, the classic scenes of Matrix become outdated and not as attractive as before.

The highlight of the film is the return of two stars Keanu Reeves and Carrie-Anne Moss. At the age of U60, the duo is no longer young but brings a lot of emotions when standing in the same frame. Reply to magazine Empire, the actors said they were very happy to be back on the project, having to undergo martial arts training a few months before filming began. Both of them revisited previous seasons to learn from and prepare for the role.

Actor Keanu Reeves continues to maintain his action style, performing well in acrobatic and fighting scenes. However, Neo’s shape is somewhat similar to the character John Wick in the series of the same name, with long hair and a moody face. Meanwhile, Carrie-Anne Moss still maintains a good body, expressing the inner character of the character through each eye and gesture. At the end of the movie, the actress boldly shows off the action scenes even though she hasn’t acted in a movie for a long time The Bye Bye Man (2017).

When the film ended, some details were left open as a springboard to develop the next part. Currently, director Lana Wachowski has not revealed any information about Matrix 5. Ann Sarnoff – president and CEO of Warner Media – said the studio is ready to “give the green light” when Wachowski agrees to make a sequel. According to the page’s rating Decider, the result depends on whether the performance at the theater is good or not, like the case of director Denis Villeneuve with Dune.

The film was turned away by audiences and critics alike. When it was released globally on December 22, the work only earned $ 22.8 million at the box office, losing even to the “bombs”. Snake Eyes (more than 40 million USD). The work received the lowest overall rating in the series, with 6.3/10 on Rotten Tomatoes, 64/100 on Metacritic and 5.9/10 on IMDb. Most of the comments criticized the script and the director’s storytelling, saying that the long length (148 minutes), the acting of the duo Keanu Reeves and Carrie-Anne Moss could not save the film.