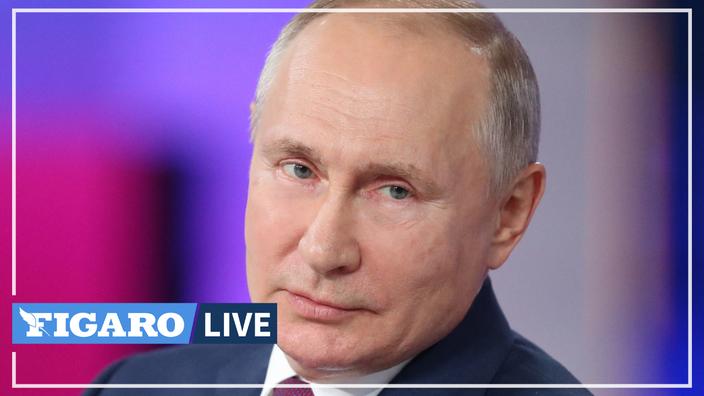 After a sharply lower opening, European stock markets ended on a cautious note on Tuesday while Wall Street was in the red.

After a sharply lower opening, European markets finally relaxed, with London even ending slightly in the green (+0.13%). Paris and Milan ended a very volatile session sluggish and Frankfurt down a small 0.26%.

During an intervention at the White House, US President Joe Biden reacted by promising to impose sanctions on banks and “Russian elites”. Russia, therefore, “can no longer raise money in the west and can no longer trade its new debt on our markets or on European markets”, clarified Joe Biden. Faced with these announcements, Wall Street tempered its losses at the end of the session, judging that the American Administration had not played “worst case scenario” and retained some leeway, said Art Hogan of National Securities. “Sanctions have been deployed in a reasonable way, the administration retains control to come back with more sanctions if necessary”according to the analyst.

Following statements by the Russian president the day before, NATO said on Tuesday it expected a large-scale attack from the country in Ukraine and put its rapid reaction force on alert to defend the allies. Russia will evacuate its diplomats from Ukraine, accusing the authorities of this country of not doing what is necessary to guarantee their safety. And the meeting scheduled for Friday in Paris between the head of French diplomacy Jean-Yves Le Drian and his Russian counterpart Sergei Lavrov has been canceled.

The 27 EU member states on Tuesday approved a “penalty package” at “unanimityagainst Russia after its decision to recognize separatist territories in eastern Ukraine. These penaltieswill hurt Russia very badlyadded the head of EU diplomacy, Josep Borrell. For now, Western sanctions include the “suspension” of the authorization process for the Nord Stream II gas pipeline and target the Russian financial sector.

The big risk for Europe concerns Russian gas supplies. “The prices of natural gas contracts in Europe have rebounded since Monday but they remain below the average prices observed since January and above all they are moving very far from the December stress peak.“says Alexandre Baradez. Crude oil prices were also soaring but they were already very high before the Ukrainian crisis. The barrel of Brent from the North Sea for delivery in April ended up 1.52% at 96.84 dollars, while it had reached 99.50 dollars a barrel in the morning and that of the barrel of American WTI closed up 1.40% at $92.35 after climbing 4.86% to $95.50.

Read alsoEurope in search of alternatives to Russian gas

Mining stocks linked to Russia rebounded from their fall the day before in London: Evraz climbed 5.36% to 281.30 pence and Polymetal 2.80% to 1,100.50 pence. The securities of the shareholder companies of the Nord Stream II gas pipeline had mixed fortunes, down for the German Uniper (-3.22%) and the Austrian OMV (-2.01%) and up slightly for Engie (+ 0.73%) and Shell (+0.53%). The prices of aluminum and nickel reached levels not seen for several years.

Read alsoThe barrel of oil is close to 100 dollars, a boon for Moscow

SEE ALSO – Ukraine: the EU has prepared sanctions against the recognition of the independence of the separatist regions by Russia

The second largest automotive group in the world, Volkswagen (+ 7.84% to 188.70 euros), in search of funds to finance its electric transition, announced Tuesday a project of IPO of Porsche, valued several tens of billions of euros. euros. The group is inadvanced discussions” with its main shareholder, the financial holding company Porsche SE (+ 11.30% to 90.78 euros), and negotiated a “general agreement“which must constitute”the basis for further steps for a possible IPO of Porsche AG“.